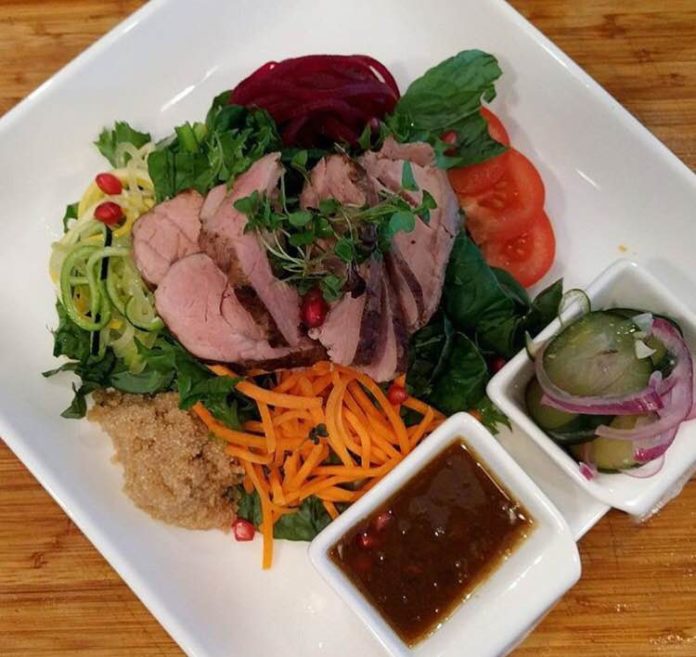 Hope we can help you enjoy the dog days of summer with the latest edition of Jersey Bites Buzz, where Susan Bloom takes a look at some key openings around the Garden State. Have a restaurant/food outlet opening, closing, or other key development to share? Email your news to info@jerseybites.com.

Opened in late July, this quick service restaurant features freshly made, locally sourced, environmentally responsible, and high integrity menu items that are both nutritionally dense and delicious. Based on a build-your-own concept that draws from an extensive variety of ingredients, “there are 39,000 different combinations possible from among the various wraps, grain bowls, sandwiches, soups, and salads on our menu,” said Madison Gourley, Fresh Kitchen supervisor. The menu was conceived by owner Mike Nitto and Chef Chris Burgess, and signature items include the eatery’s lavash wraps, restorative chicken stock (simmered with herbs and seasoning for 16 hours), and hydroponically grown greens that are delivered fresh daily and cut/prepared on the spot. Fresh Kitchen also offers house-made granola bars and cold-drip teas (such as the current watermelon white tea) prepared from fruit and honey and provides growlers for customers to use for the purchase of tea or chicken stock refills. Within the bright 34-seat restaurant, which offers a convenient online ordering system for quick pickup, “we feature a hydroponic living wall at our entrance and a modern, clean, and uplifting environment,” Gourley said. “Guests have been excited by all of the different options, colors, and flavors on our menu and we’re a great destination for lunch or anytime.” Opened on July 28, this restaurant (located on the former site of the Forge & Anvil Restaurant) features the vibe of an East Village eatery within the bucolic setting of Hunterdon County. In addition to tasty burgers, pizza, and wings, signature dishes handcrafted by Executive Chef Peter Van Antwerp on the restaurant’s classic bistro menu include the Tavern steak, “a hangar steak prepared with white wine shallot sauce and served with green beans and French fries as well as our salmon paillard, a thin salmon cutlet prepared in a brown butter and caper sauce and served over a beet and arugula salad with orange segments,” said Ben Rosenthal, proprietor and an East Brunswick native and former winemaker. He said, “Our Vietnamese po’ boy sandwich, which features a medley of pâté, pork roll, ground pork, pickled vegetables, cucumber, and sriracha aioli on a baguette, is another popular option and we also offer a wonderful and growing list of Italian, French, Spanish, and American wines,” many of which are available for sale at The Kingwood Tavern at very reasonable prices. Rosenthal confirmed that he’s excited for guests to experience the 54-seat restaurant’s cozy ambiance and looks forward to officially opening its large backyard this September—just in time to host Octoberfest festivities. Overall, he said, “guests will enjoy great food and drink here and leave happy every time.” Opened on August 8 in Newark’s business district, FreeTown Café is a relaxed urban café launched by Owner and Executive Chef Kwame Williams along with his sisters Kanika and Nataki, all of whom are also owners of the two-year-old Vital, a pescetarian/paleo/vegan/vegetarian Jamaican restaurant in Montclair. FreeTown Café offers a colorful variety of fresh paninis, pastries, soups, and salads, including its signature stuffed avocado salad featuring half an avocado stuffed with almonds and pico de gallo on a bed of arugula and its unique black-eyed pea hummus served with fried plantain chips. At the 24-seat eatery, which offers communal bench-style seating at tables made from reclaimed wood and seat cushions adorned in authentic African prints, “we have a very open aesthetic with 10-foot windows that let in a lot of natural light,” said Williams of the bright, colorful, and eclectic vibe at the internet-friendly café, which also offers a full juice and smoothie bar and an extensive range of coffee drinks (using Jamaican-grown Marley Coffee) with Caribbean-inspired syrups in such flavors as coconut and nutmeg. “We’ve worked to create a space that’s welcoming and comfortable for everyone and are excited to offer everything people love in a café with a Jamaican twist,” Williams said. Opened on July 1 by Vietnam native Paul Huynh and his wife, Irene, Saigon Subs offers a range of nine-inch Vietnamese-style sandwiches on toasted baguettes that feature such meats as Vietnamese pork roll, ham, BBQ pork, meatballs, beef, or chicken combined with pickled carrots, cucumbers, jalapeño peppers, daikon (radish), and cilantro along with mayonnaise and a liver paté. Don’t miss the eatery’s popular Saigon Special, “a sandwich with a combination of ham, pork roll, and BBQ pork along with all of our toppings,” said Huynh, a longtime restaurateur who owned numerous Chinese restaurants throughout New Jersey and New York prior to launching this new venture in Morristown. Vegetarian sandwiches made with tofu are also available, as are summer rolls, salads, and a variety of authentic Vietnamese desserts. Huynh said that the primarily takeout restaurant has had a strong following since opening and that guests are enjoying their menu’s fresh, healthy ingredients and flavorful subs made with a Southeast Asian flare. Celebrating its grand reopening on August 5 with a ceremony including Boonton’s mayor and other local dignitaries, the eight-year-old Vinnie’s Pizzeria & Ristorante has been re-energized by new owner and restaurant industry veteran Mickey Chopra, a Rockaway resident who arrived in the U.S. from India in 1987 barely able to speak English and worked his way up through the industry; most recently, he served as director of operations for Taco Bell’s mid-Atlantic demographic marketing area before taking over ownership of Vinnie’s. Among the signature dishes on the restaurant’s family-friendly menu, don’t miss Nonna’s thin crust pesto pie, a pizza featuring a pesto pie crust topped with fresh mozzarella and tomato sauce and drizzled with pesto sauce and fresh basil. The 80-seat restaurant has also launched a new international buffet on Sundays from 1 to 7 p.m. featuring a different authentic world cuisine each week and recently initiated a charitable new program “Feed the Needy,” through which customers can donate meals at discounted prices that are matched 50% by the restaurant. “With our great team, we look forward to providing outstanding food and service while helping to connect people and be a vital part of the community,” Chopra said of this new opportunity. Celebrating its grand opening on July 16 with an official ribbon-cutting ceremony involving the town’s mayor, the new Chester-based branch of Dean’s Natural Food Market represents the fourth location for the family-owned chain, which launched its first store in Ocean in 1996, followed by locations in Shrewsbury in 2006 and Basking Ridge in 2012. Committed to carrying 100% organic produce and only the highest quality and most environmentally responsible products, the store offers a broad range of fresh fruits and vegetables, meats, sandwiches, prepared foods, juices, and smoothies as well as gluten-free and allergy-friendly foods and a wide array of vitamins, supplements, and health and beauty aids. Committed to supporting local charities in all of the communities in which it operates, Andrea Tudor, director of marketing, said that Dean’s was very excited to establish a location in Chester and has been very warmly received by local residents since opening.

Following the opening of its first New Jersey-based bricks-and-mortar restaurant in East Brunswick this May, The Halal Guys will be opening a second location in Newark in late September/early October. Part of a 26-year-old restaurant chain that was originally launched as a popular food truck on the corner of 53rd Street and 6th Avenue in New York City, The Halal Guys is known for its large portions, reasonable prices, and signature chicken, beef, falafel, and hummus platters served with renowned white or red sauce and prepared to Halal standards (e.g., specially treated and slaughtered according to Islamic law). A spokesperson for The Halal Guys confirmed that the restaurant team has been thrilled with the reception it’s received from the community so far and is excited to continue the franchise’s expansion to Newark, noting that future locations may include New Brunswick, Princeton, Montclair, Edison, and more.