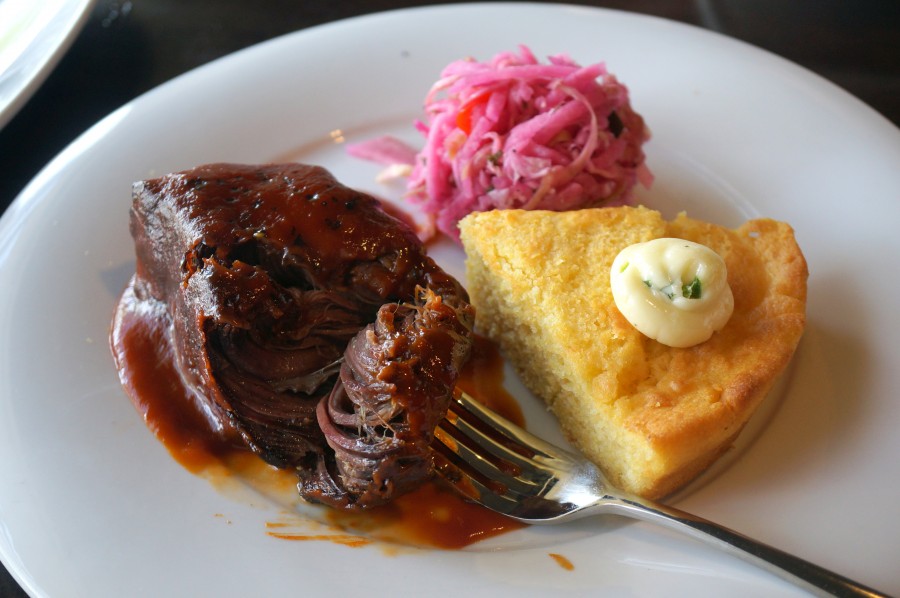 Note: Jersey Bites was invited to visit Harvest and received a complimentary meal.

You might think words like “local” and “seasonal” don’t belong in the same sentence with shopping mall. Harvest Seasonal Bar and Grill, with six locations and two in the works, just might banish that stereotype.

A few weeks ago, Jersey Bites Executive Editor Deborah Smith and I enjoyed a lunch at Harvest’s Moorestown Mall location. Unlike many chain restaurant cooks, Executive Chef Peter Chan knew exactly where he purchased every ingredient for our meal—down to the names and locations of the farms on which they were raised.

While Chan always sources his ingredients from nearby farms, there’s a lot more to his selection process than just buying local. ”Quality is my first priority,” Chan told us, emphasizing the ethics of the food in his restaurant. When stocking his kitchen, he seeks out humanely raised animals, non-GMO crops, and organic produce from 75 local farms. To Chan, these are more than just buzzwords—they’re integral components of the freshest cuisine, benefitting diners and the environment alike. Noting their exceptional quality, Chan orders many of the restaurant’s products from Zone 7, a New Jersey distributor whose aim is to strengthen relationships between local farmers and restaurants.

Ironically, through years of global culinary experience, Chan learned the importance of buying local. Born in Hong Kong, Chan and his family immigrated to Philadelphia when he was a child. Chan’s parents then owned Chef Chan’s in Voorhees for more than 25 years before selling the business.

Continuing in his family’s culinary tradition, Chan trained for several years under a European master chef at the Philadelphia Wyndham. From there, he became the executive chef at City Tavern. Chan later carried his culinary expertise abroad where he worked as the executive chef for six restaurants at Sandals Resort in St. Lucia, before further honing his craft in New Orleans. When Hurricane Katrina devastated his restaurant, Chan took a job in Brazil. After he finished his work there, he returned to be with his family in New Jersey. Chan then worked at Harrah’s Casino in Atlantic City. Finally, he began his tenure at Harvest.

Like Chan, all the employees Deb and I encountered seemed to know a lot about Harvest’s dishes—including ingredients, sourcing, and flavors. To further understand where their food comes from, Harvest’s employees also tour the farms from where they get their produce and meats. “A couple times a year, we have people go out and see the farms,” Alex Cadoux, the assistant general manager, informed us.

Our friendly server, Monique, enthusiastically recommended the nutty watermelon salad, a mixture of biting watercress, sweet watermelon, seasonal berries, and toasted almonds finished with a zesty lime vinaigrette. When she placed the dish in front of us, we remarked that if nothing else, it would make for a pretty picture. Not surprisingly, our tastebuds enjoyed the dish as much as our eyes did. Anyone who has tasted a fresh Jersey watermelon during peak season can probably imagine the pleasant fusion of sweet and tangy that went into that salad.

After we ordered our first course, Deb and I couldn’t quite decide which menu items to sample next, with so many creative dishes to try. Monique and Chan were eager to help, informing us that no meal at Harvest is complete without one of their famous flatbreads. We asked for the BBQ pork variety, a combination of pork and mild cheddar from Hope Springs Farm in Pennsylvania, finished with a chipotle blackberry barbecue sauce.

We learned that in addition to locally sourced food, Harvest also specializes in diet-specific cuisine, and they boast extensive low-calorie, vegan, and gluten-free menus. Although neither of us are vegetarians, we didn’t miss the cheese in the basil and white bean ravioli, a delectable fusion of vegetables, basil pesto, Meyer lemon oil, and roasted red pepper sauce served over ravioli from Westmont’s Severino Pasta Company.

Our next order of business was BBQ braised short rib, one of Harvest’s most popular menu items (shown at top). A slice of pie-shaped jalapeno honey cornbread accompanied the tender, sweet mango pineapple ribs. But my favorite part of this entree was the crunchy, slightly sour jicama slaw topped with black lava sea salt.

Just when we thought we couldn’t possibly eat any more, Chan implored us to at least taste the grass-fed bison burger, another popular Harvest favorite. The meat, served with shiitake mushrooms, Hope Springs Farm’s baby Swiss, and truffle Aioli on a flaky onion roll, hailed from Fossil Farms in Boonton, New Jersey. Along with the burger, Chan also served his charcuterie tasting platter, an array of cured meats, crostini, jams and cheeses, all sourced locally. My favorite part of the dish was the peach and passionfruit jam, made in-house. Deb enjoyed the Royal Blue cheese from Roundtop Farm in Honey Brook, Pennsylvania. Even the honey on the platter was locally sourced from Lancaster Farm Fresh Cooperative in Lancaster.

Somehow, Deb and I managed to save room for dessert, and we were glad we did. Luckily, Harvest serves their desserts shooter-style in miniature glasses. Deb sampled the key lime pie, while I devoured my campfire S’mores with a cup of cappuccino.

Even after everything we ate, we still left wanting to try more, like Harvest’s creative cocktail menu, which highlights seasonal fruits and vegetables, as in the watermelon martini and the cucumber basil martini. From the farm-to-table brunch menu, diners can choose from four varieties of mimosa and three kinds of bloody marys. On that same menu, Harvest also serves up some non-alcoholic cold-pressed juices containing ingredients like quinoa and fennel.

So what’s next for Harvest? For one, the restaurant plans to expand their local efforts. Newly released at the Moorestown location is a menu that pairs Harvest’s food with wines from Valenzano Winery in Shamong. Alexandra Calvo, Harvest Moorestown’s sales and marketing manager, also let us know that they hope to give back to the community in November through a partnership with Browning’s Farm and local non-profit Live Civilly, at a festival aimed to teach kids about food. On the national level, Harvest plans to soon open locations in Delray, Florida and Newtown Square, Pennsylvania.

However the restaurant decides to expand, one thing is for sure: they’ll still be keeping things local.