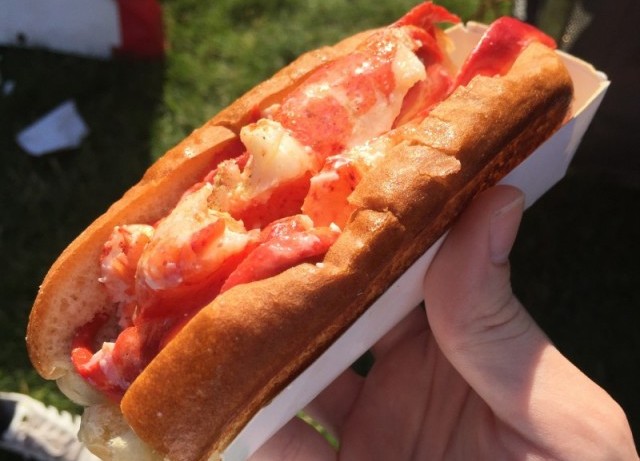 No matter where you are in New Jersey you’re never far from the Jersey Shore, and in turn, great seafood. Come summertime, New Jersey residents everywhere, myself included, flock to towns all along the shoreline for seafood festivals—a fixture of coastal foodie culture.

Upcoming seafood festivals taking place across New Jersey this summer include the following:

A couple of weeks ago, I stopped over at the Bradley Beach Lobsterfest, during its eighth annual celebration of the king of crustaceans. As I walked up and down the bustling boardwalk where the event was being held, there was no doubt as to what the focal point of the weekend’s festivities was. Practically every food vendor had signage mentioning “lobster” in one way or another, whether it was lobster rolls, lobster mac ‘n’ cheese, lobster bisque, lobster cakes, or even lobster empanadas.

However, having never tried the classic lobster roll before, my Lobsterfest objective was clear from the very beginning: I had to get my hands on one.

My lobster roll proprietor of choice was the Nauti Mobile food truck, owned and operated by Luke’s Lobster, a series of self-described Maine-bred seafood shack[s], specializing in sourcing ingredients from sustainable fisheries and highlighting them by way of simple, no-frills preparations.

A brief mission statement on side of the Nauti Mobile read, “… we buy directly from lobstermen so we can trace its exact origin back to the very dock it came from,” and while Luke’s Lobster uses only lobster from the waters of Maine, the taste of their lobster roll made me question if they had actually just pulled a fresh lobster out of the nearby ocean only minutes before. The first thing I noticed about the lobster roll from the Nauti Mobile was that there could be no doubt as to what kind of sandwich I was about to dig into: the generous amount of lobster meat jam-packed between the embrace of a warm, toasted roll was more than enough indication that this was, indisputably, a lobster roll. The second thing I noticed was the vibrant color of the lobster meat, which consisted of vivid whites and reds, peppered by flecks of seasoning.

Not surprisingly, the lobster tasted just as fresh and bright as it looked. The lumps of meat were cool and tender, and the light seasoning and simple preparation showcased the sweetly succulent flavor that lobster ought to always have.

As the name “lobster roll” would suggest, however, the lobster makes up only half of what made this sandwich so crave-worthy. One might assume that the other half, the roll, would likely be overshadowed by its crustacean counterpart since, after all, this was Lobsterfest and not Rollfest, but that assumption would be far from the case. Instead, the roll served as the perfect companion to its impressive-on-their-own contents.

The bread was fluffy, with a crisp, light brown exterior that was likely achieved by having both sides of the roll spend a moment getting acquainted with a smear of butter atop a flattop grill. The sweet flavor of the butter became embedded within the roll itself and, in conjunction with the lobster meat, was reminiscent of the classic combination of broiled lobster turned deliriously decadent with a generous dousing of clarified butter. Overall, this lobster roll was a fitting example of everything Lobsterfest and other New Jersey seafood festivals celebrate: great foods made from fresh ingredients that make us appreciate what the bounty of the sea has to offer. Bonus: It also paired really well with a side of crisply fried Oreos and a fantastic ocean view.