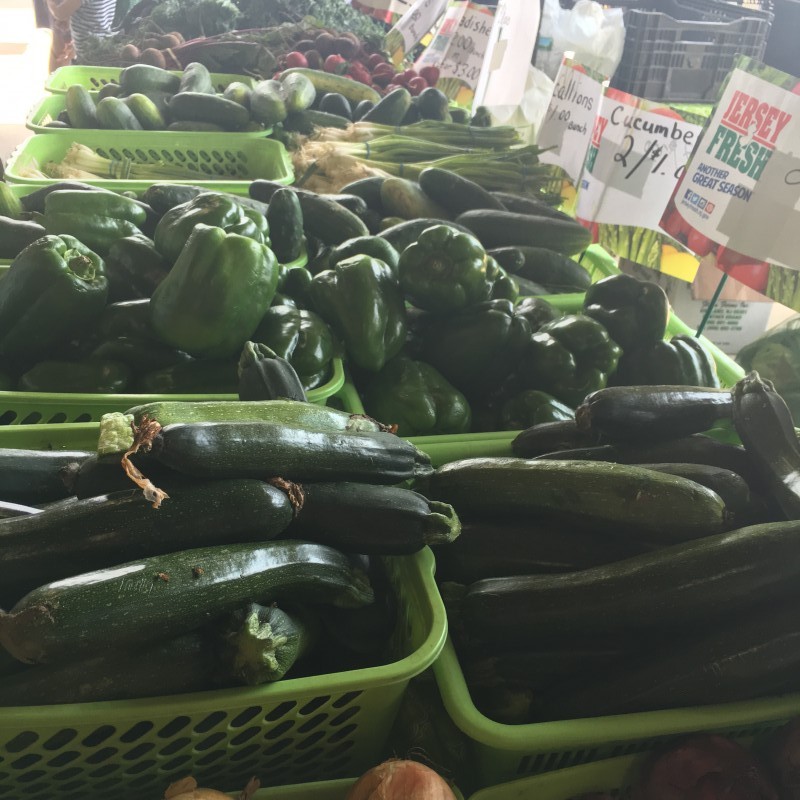 If there’s one word that describes the Burlington County Farmers Market best, it’s community. During my first visit of the 2016 season, my husband, toddler, and I watched from a spot on the lawn as shoppers relaxed with their friends and families. Shaded under the umbrellas at the market’s picnic tables, locals swayed to the live acoustic stylings of TonyO’s Music while dining on hot gyros served up by Kuzina by Sofia. The weather was sunny, the mood cheerful, and the market full of unique flavors.

Mary Pat Robbie, director of the Burlington County Department of Resource Conservation, explained that the market’s overwhelming sense of community is something she has watched evolve since the venue’s 2007 debut. “People do know one another from coming to the market,” Robbie told me. “They know their vendors, they talk, they chat, they bring their dogs. They sit and listen to music, and it’s just a nice way to spend a Saturday morning.”

And that community vibe extends beyond the market’s shoppers. In fact, the market’s more than seventy vendors also bond with one another at the weekly event, which is held every Saturday from 8:30 a.m. to 1 p.m., May through October. Melissa Crandley, chocolatier of MECHA Artisan Chocolate, pointed out that in addition to the customers, the other vendors have been an especially important part of the market’s neighborly atmosphere. “There is a great sense of camaraderie among all the vendors,” Crandley noted. “We like to see each other succeed.”

Together with her husband Charles, Crandley makes artisan chocolate from a modest kitchen located in the SoHa Arts Building in Haddon Township. The market offers her an additional outlet to perfect her art, particularly because the shoppers who frequent her table are adventurous eaters who don’t shy away from unusual taste combinations. She emphasized that her customers look for original, exciting new flavors that challenge her creativity. As a food artist, she loves that she can use the market to practice her craft and invent daring new chocolate varieties. “The market allows us to experiment, test, and expand our offerings so we can ‘wow’ our customers,” Crandley remarked.

Danielle Brenner of The Jersey Farmhouse echoed many of Crandley’s sentiments, praising the loyal customers who return to her booth week after week. Like Crandley, Brenner appreciates the bold palates of her clientele, which allow her to fully explore her culinary creativity. And, creative is certainly the right word to describe the Farmhouse’s products, which use Jersey Fresh ingredients to innovate unconventional flavors like peachy pepper jam. “They not only are very supportive, but are fun and daring whenever I want to try a crazy new flavor,” Brenner said of her customers, adding, “They appreciate my mission of keeping it local and seasonal. When they tell me they are stocking up for the holiday or taking to a friend, it is the ultimate compliment.”

Although the market now boasts a wide variety of food, beverage, and craft vendors, when Robbie and her colleagues first conceived the idea for a market, their primary mission was to offer local farmers a place to direct market their produce. Three years before the market began, the county purchased a 68-acre farm on Centerton Road in Moorestown. Because the farm was located outside of their usual preservation area, they brainstormed some ways they could make it as special as possible. They believed the farm’s location in suburban Moorestown would be an ideal place to host a farmers market. The remarkable popularity of the event, which is measured using parking lot car counters, has proven the accuracy of that prediction. When the market began, it started with only seventeen vendors. But it has grown so much that, in 2015, an average of 900 cars visited the market on any given week. On some peak weekends, the market’s customer base has increased to as many as 1,300 cars, demonstrating just how much of a success it has been.

Due to the market’s high volume of traffic, many of the participating farm vendors have gained new customers. “Agricultural vendors are very pleased,” Robbie said. “They’re moving a lot of product.”

Nancy Hlubik of Hlubik Farms in Chesterfield described the market as “an integral part of the community.” She praised its role in expanding her business, adding, “I love the fact that we are able to introduce our product to a wider customer base and build new relationships with the customers.”

But supporting local farms wasn’t the only goal Robbie’s team had in mind when they began the market. The second part of their mission was to educate the public about Burlington County’s agricultural scene. To fulfill that goal, they have worked closely with the Rutgers Cooperative Extension, which hosts demonstration plots on the farm where the market is held. At the preserved farm, they also host other programs and events designed to foster an understanding of local agriculture, and the market is another means to help fulfill the department’s twofold mission of ensuring the viability of area farms and helping people appreciate the agriculture in the area.

If you stop by the market, you’re likely to at least develop a greater appreciation for some of the unique and entrepreneurial ways local farmers are using agriculture to create new area businesses. Elizabeth Ann Sidhom owns the Cat’s Meow, a vegan/vegetarian cafe in Medford. To be clear, the cafe isn’t your typical soggy, frozen veggie burger joint. In the truest sense of the term farm-to-table, Sidhom takes the vegetables her husband, Wilson, grows at Fertile Crescent Farm to cook the items on their menu.

The next time you’re in Moorestown on a Saturday, make a point to swing by the farmers market. Better yet, if you love local food, make a special trip there. Once you’re there, you’re certain to discover not only something new to delight your taste buds, but you’ll also feel like you’re truly a part of a community coming together to support local food—and each other.

Watch for recipes from The Jersey Farmhouse and The Cat’s Meow, coming soon on Jersey Bites!