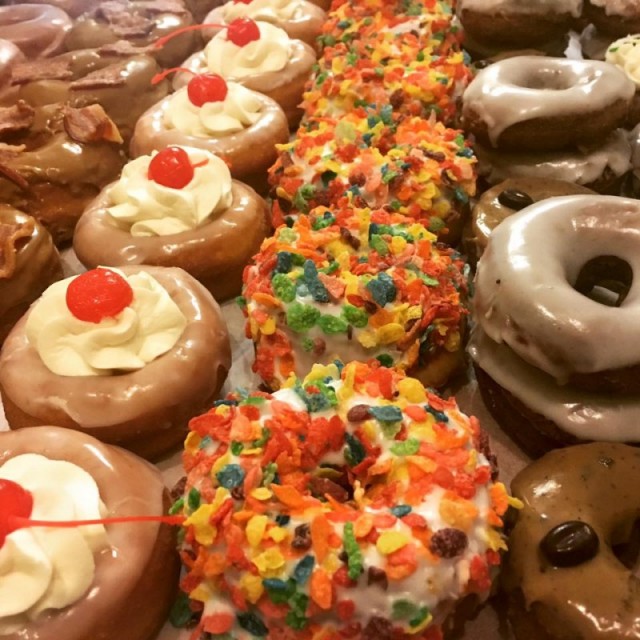 An integral part of the Montclair community, the Montclair Bread Company maintains a full calendar of classes, camps, parties, and a running club. (You’d think the place were fueled by doughnuts or something.) Crampsey sat down with Jersey Bites to discuss everything from coffee to community to the Culinary Institute of America.

JERSEY BITES: What is your earliest food memory?
RACHEL CRAMPSEY: I remember when I was really little, I wanted chocolate milk in a bottle and my dad mixed it with cocoa instead of chocolate syrup. It clogged the nipple and I couldn’t drink it, and my mom yelled at him because he didn’t know what he was doing. It’s a weird memory, but I remember that. And I remember cakes. My grandmother decorated wedding cakes for a living. She really let me be involved in that process. She would give me a paper plate to decorate while she was decorating the real thing and I remember lots of frosting, all of the time. I remember it being frustrating because she’d be whipping the frosting, and the mixer was so loud I couldn’t watch cartoons because the mixer was in the background.

When did you realize you wanted to do something with that?
My dad’s dad was a very conservative businessman. So to do something like this a career was unheard of because you would never make any money and you could never survive—you got to sell a lot of doughnuts. Then I went to college at the University of Florida, and I was baking cookies and brownies and selling them at the local coffee shops to pay my rent while I was in school.

What did you major in?
French. [Baking] was just something that I could do and I enjoyed doing, so I did it but I never really thought it could be my life. While I was in school at Florida I had a following for my cookies: cowboy cookies, and rocky road brownies. There would be a line waiting for me to drop them off at this one little deli. That was when I started thinking about culinary school. I started looking into it and I wrote a couple of essays. Then I graduated and I moved back to my hometown, Chestertown, Maryland. I signed up to substitute teach and my first day on the job a teacher walked out, so I [taught] for the rest of the school year. But in the mornings before I went to teach, I helped my friend who had a catering business make all of the desserts for her parties. I’d get up at three in the morning, go do that, then go teach. That’s when I applied for the Culinary Institute of America and I got accepted and decided to make a career of it, because teaching wasn’t for me. How would you describe your style or your approach?
The community is the most important thing—being a part of that through food is what I try to do. I know some people think we’re expensive but we also have lower price points too. [And we make] sure that we have stuff for kids, adults, everybody. We even have a running club now. So creating this community awareness through food and doing whatever we can, as a local business, to embrace our community. And then we just happen to make some really great breads and doughnuts, too.

If we can bring everyone on our journey from grain to loaf through education, through marketing, whatever it is that we can do, so that everyone knows how it’s made, and why we do what we do, and what ingredients we use, that’s part of it.

What is the most memorable baked good you’ve had?
When I first went to France I was from a meatloaf, mashed potatoes kind of family. I was fourteen maybe, if that. I went with a school group. I had never had a leek before; I never had a scallop; I never had an endive. There was so much that I never even knew existed. And I never had a baguette before, not a real baguette. It was my first baguette and it was just so amazing, everything about it. Even when I come close to hitting the mark on it and it gets me somewhere near that first memory it’s just incredible. Then on that same trip I had this thing, and I know there’s a name for it, I still, to this day, can’t figure out what the name is, but it’s basically a fried brioche bun, like a burger bun, coated in granulated white sugar, split in half, and filled with pastry cream. It looks like a burger. I kept asking the family to take me back to that bakery so I could get that hamburger thing. It’s not a hamburger thing it’s really this classy French delicacy. That really inspired my doughnuts, and how I make my donuts. All of that treatment was from that memory. I only had it once.

What would you choose as your last meal?
Chicken and dumplings. What were your early years baking professionally like?
You have to work a lot for nothing forever in order to get what you want. I baked bread for free for two years before I could get a paying job as a baker. I worked at Bread Alone and I worked as a barista because there were no openings for somebody with zero experience. I came in eight hours before my shift and I spent eight hours working alongside the bakers and learning as much as I could before I went to my paid job. I’m not from a wealthy family, my parents worked two jobs to pay the bills so it’s not like I had somebody financing this adventure in bread, I just really wanted it, I really did.

What advice do you have for aspiring bakers?
You really have to pay your dues and put the time in, and absorb as much as you can and learn as much as you can. Have zero expectations, be willing to live for nothing. When I opened the bakery we were on food stamps. I think people see my line, people waiting for doughnuts, and assume that we’re loaded. [But] what I’m most proud of in all of this is having this staff and being able to support all of these families and not just mine. We’re not in it to rake in the bucks, we really just want to create this and foster this community. If you could be any food, what would you be?
I guess maybe brioche, because I find it to be the most versatile of all of dough.

What’s one staple food item or ingredient that you always have on hand at home?
Coffee. That’s the only thing that I never run out of.

And what’s your beverage of choice?
Coffee. And beer.

What New Jersey bakeries or bread shops do you love?
Piece of Love Pastries. They’re doing some really great things, like jam made from fruit from the farmers market. [The owner, Jen] also makes hand pies from the jams she makes. I really love what Ester [Mallach] does at the farmers market, at Ester’s Treats. I think her chocolate oatmeal bars supported my second pregnancy.

If you could have dessert with any three people, living, dead, fictional, who would you choose?
My grandma, my great grandmother, and my daughter.

All images are courtesy of Montclair Bread Company unless otherwise noted.