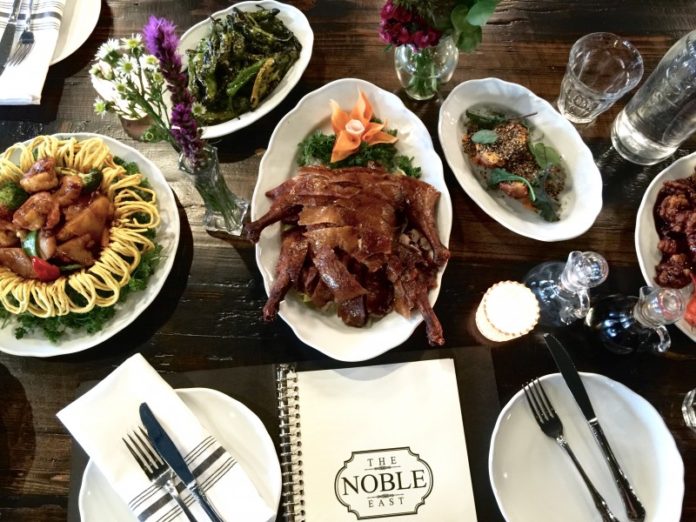 We’re stepping into summer in style with the latest edition of Jersey Bites Buzz, where Susan Bloom takes a look at some key openings around the Garden State. Have a restaurant/food outlet opening, closing, or other key development to share? Email your news to info@jerseybites.com.

Opened in late April, this Asian-fusion restaurant is delighting diners with both shareable “little plates” featuring such items as dumplings, steamed buns, ravioli and wontons, and vegetables as well as main course “big bowls” featuring a choice of ramen, lo mein, traditional rice, eight-grain rice, or rice noodles topped with meat, fish, or vegetables. Among the new restaurant’s top sellers is its spicy seafood bowl, which combines fresh seafood such as clams, mussels, and shrimp with the rice and pasta of the diner’s choice as well as broth if desired. “Our restaurant seats 30 to 40 and has cozy lighting and a calming, earthy feel,” shared one of the restaurant’s server. Opened in late April/early May, Wayne’s Wedgewood Plaza welcomed the arrival of Glaze Donuts, a two-year-old independently owned bakery chain known for its premium and artisan doughnuts. This spot is Glaze’s third location—the flagship shop in New Milford opened in 2014 and a second location in Hackensack followed in 2015. “Our new Wayne shop offers over 30 different doughnut varieties to choose from, or customers can pre-order from the over 100 varieties featured on our website  and pick them up at one of our shops,” shared a Wayne-based employee. Among Glaze’s biggest sellers are its cannoli doughnut (winner of a Judge’s Choice award at the 2016 Donut Fest NYC), as well as its Italian Rainbow doughnut, which features layers of colored cake, almond paste, jelly, and a chocolate coating “and tastes just like an Italian rainbow cookie in a doughnut form,” the employee said, adding that this special variety is available Fridays through Sundays only. Other unique flavors include French toast, peanut butter and jelly, tiramisu, pina colada, cookies and cream (topped with chocolate cookie crunch), the famed Jersey Cream, and a maple bacon variety. Artisan coffee is also sold at the shop and plans for an official grand opening event are currently underway.

Opened on May 9, The Noble East “offers everything from traditional American Chinese to authentic Chinese food and everything in between,” said owner David Hsiung. Along with classics such as chow mein and lo mein, “our edamame dumplings and Grand Marnier shrimp dishes are very popular, as is our signature Peking duck, which involves a several-day preparation process to ensure a crispy skin and is served with pancakes, hoisin sauce, cucumbers, and scallions.” At the 85-seat restaurant, “we wanted to change the way Chinese food is presented in this area,” explained Hsiung, who said that the eatery’s luxurious décor features tufted banquettes, tables made from reclaimed wood, and beautiful wallpaper. Despite all of the various Asian cuisines that compete for consumers’ attention today, “Chinese food is an American staple and there will always be a place in people’s hearts for this cuisine,” he said. “Guests will enjoy our décor, excellent service, and wonderful food presented in an elegant fashion.” Opened on May 26 with a ribbon-cutting ceremony attended by Jersey City Mayor Steven Fulop, this Irish-American sports bar with a music venue represents another successful venture from local restaurateur Michael Ryan, whose establishments (which currently include another PJ Ryan’s in downtown Jersey City) have been credited with supporting the rejuvenation of the Jersey City and Journal Square area. In addition to a variety of salads, sandwiches, and authentic bangers and mash, “fish and chips and our PJ Ryan’s Burger served with special sauce on an English muffin are among our top sellers,” said Steven Guzman, general manager. At this festive restaurant, which seats 65 inside, up to 60 on an outdoor patio, and up to 25 at an interior bar, “guests will enjoy a great atmosphere, friendly servers and bartenders, and lots of great sporting events on TV,” Guzman said. “We also have a great bourbon list and late-night menu.” Located in the heart of the Arena district, directly across the street from Newark’s Prudential Center, this restaurant, opened in April, features many authentic German/Bavarian favorites from the original Redd’s Restaurant in Carlstadt, including brats, sauerbraten, and spaetzle, along with such popular sports bar fare as Redd’s famous calamari, jumbo wings, and 10-ounce Angus burgers. According to Executive Chef Dan Palsi, signature dishes include the restaurant’s IPA Bier and honey-glazed bacon over Napa slaw “as well as our wurst platter appetizer combination featuring wiener schnitzel, pretzel-crusted chicken cutlet with mustard sauce, giant Bavarian pretzel, and fresh salads.” At the 300-seat establishment, “we’re a traditional Bavarian Bier Halle with a private dining area, over 50 beer taps, and an over 100-bottle selection of domestic, craft, and imported beers from around the world,” said Palsi. According to Palsi, the new 7,000-square-foot restaurant with communal tables to encourage socializing “is a great place for lunch, dinner, or just to unwind for happy hour.” On June 24, the Short Hills Mall will welcome the arrival of Sugarfina, a four-year-old purveyor of premium candies with 15 locations nationwide. Known for such exclusive treats as its Cuba Libre® (spiced rum and cola gummies), Peach Bellini® gummies, chocolates, and other confections, the store encourages guests to create Bento boxes from the shop’s over 110 candy varieties from all over the world, which make for beautiful custom and corporate gifts, private events, dessert bars, and other special events. “We created Sugarfina because the candy store of our dreams didn’t exist and we’re delighted to open a boutique in Short Hills,” said cofounders, candy connoisseurs, and sweethearts Rosie O’Neill, former director of marketing for Barbie, and Josh Resnick, a former video game entrepreneur. “We dreamed of gourmet sweets made with premium ingredients—candy that’s as beautiful to look at as it is to taste—and our new shop brings delicious, never-before-seen candies to Short Hills.” The Sugarfina shop at The Mall of Short Hills will be located on the mall’s lower level near Guest Services. Slated for an early July launch, this small plates gastropub influenced by a variety of world cuisines will represent the latest venture for the restaurant group which also owns the Brass Rail in Hoboken, the Stewed Cow in Hoboken, and Moonshine in Millburn. Executive Chef Matthew Arlington said, “we’ll be featuring old-world flavors with a modern look and feel, such as a Brussels sprouts Caesar salad featuring shaved Brussels sprouts in a roasted garlic oil and lemon zest with preserved parmesan cheese as well as pepperoni pizza cavatelli made with fresh ricotta and a pepperoni bolognese finished with toasted bread crumbs.” The restaurant will also feature house-made pastas and meatballs. Themed around historic spaces in the area that used to be used to hold union meetings in the early 1900s, “Union Hall seats 125 inside and at the bar and has seating for another 45 on our patio and at our outdoor lounge area,” he said. “We like to say that we’re a place for self and others, where you’re not confined to one entrée but can try a lot of different dishes and flavors. We encourage guests to mix and match items and to create their own menu.” Scheduled for an August opening, the upcoming 70-seat Viaggio (located at the former site of Novu in Wayne) will feature a partnership between chef/CIA graduate Robbie Felice and his father Joe, owner of such eateries as Gourmet Cafe in Parsippany and Casa de Amici in Denville. Set to showcase authentic Italian food, “the menu will be designed so that guests can dine as they would in Italy—beginning with small pickings for the table to share (such as marinated olives, charcuterie, etc.), an antipasto course, a primi course, featuring our large selection of homemade pastas, a secondi course featuring main entrées, and finally concluding with dolce,” he said. While the locally and seasonally sourced menu is still under development, Felice promises a few not-to-miss favorites. Among these, “we’ll be offering such items as charred octopus, polpette over creamy polenta, tri-color salad, Bucatini all Amatriciana, Tagliatelle Bolognese, grilled Tagliata steak, and innovative dishes involving pappardelle and branzino,” he said. Transformed through decorative elements including old Italian red brick combined with such modern materials as reclaimed wood, the rustic BYOB “won’t feel like your average strip mall restaurant,” Felice said. Designed to be busy, festive, and casual, like eateries in Italy, “we’re super excited to create a modern, laid-back vibe with delicious food and unbeatable service,” Felice said.