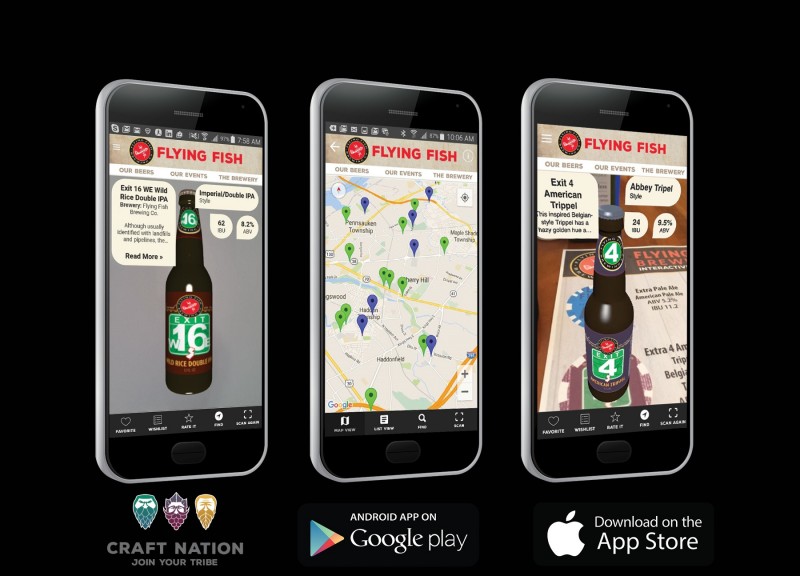 Besides hops, water, malt and yeast, there is a fifth key ingredient that goes into making the fine lagers and ales we call craft: Innovation. Brewers are blurring style lines, introducing adjuncts and creating flavors that were unimaginable just a few years ago. Inventors, designers and even marketers are starting to carry that innovation beyond the brew house.

The “aha” moment for Jay Reilly, cofounder of Craft Nation, came during a conversation with his son, who had recently started working in sales for a small brewery. At the time, Reilly wasn’t necessarily a huge craft beer fan (though he certainly is now), and was puzzled by his son’s enthusiasm after a beer festival at which he represented the brewery. It was the first one to run out of beer and everyone seemed to love the product. Success, right?

Well, not to Reilly. He thought, Where’s the data? A person walks up to your jockey box, you pour them a taste, and they take a sip, smile and say they like it. Then they walk away. You know nothing about them and they don’t know much about you, either. “That’s not sales!” he said, before continuing, “That’s just giving away free beer!” Reilly’s sales and marketing instincts told him there had to be a better way. He started doing some research. (And by research, I mean going to beer festivals and talking to people. He’s really good at that.)

For breweries, the big questions are: How do people remember you? And if they remember you, how do they find your beer? His research also led him to a European company and a concept called interactive branding. That discovery, in turn, led to the development of Craft Nation.

Simply put, Craft Nation is a smart phone app that offers a direct link between the folks who make the beer and the people who drink it. It is one platform for all breweries to create a branded app experience and loyalty program, so consumers don’t need to have multiple brewery specific apps on their phones.

You may be thinking, Oh, great another app. Here’s the thing: Craft Nation is different from other beer apps you might be familiar with. It’s not a rating tool focused on creating conversation among beer drinkers. Instead, the focus is on creating a conversation between beer drinkers and the brewery. “Engage Your Tribe” is how they put it.

How It Works
The app’s “scan and discover” feature recognizes a bottle label or “token” using your mobile device camera and takes you to a branded content page where you can learn more about that beer and the brewery. The user can create a wish list, rate the beer, favorite it, share it and find it. Any of those activities can earn the user rewards points as part of a loyalty program. Brewers can also create “missions” like attending events or social media shares, which can earn them extra points on their way to becoming a brand ambassador. Each brewery creates and controls its own loyalty program, determining point allocations and redemption items.

Craft beer drinkers are notorious for being promiscuous, but according to Reilly (and Craft Nation’s research) they actually exhibit loyalty to between four and six brands. (Sounds about right to me.) I’ve heard many brewers talk about the grind of constantly cranking out new beers in order to keep up the buzz about their brand. That’s not sustainable and can be confusing to the consumer. With a program like Craft Nation, a brewery can tell its story directly to the beer drinker and continue the conversation with that individual.

Reilly and his Craft Nation have Jersey roots. The home office is in Glen Rock. Soon the program will roll out in its first New Jersey brewery. It’s no surprise that the first to jump on board is the pioneer of craft beer in the Garden State, Flying Fish. “We are putting the final touches on the app now,” Gene Muller, founder of Flying Fish, said. “We thought it was a great way  to enhance the visitor experience. We also see it  as a reward for our better customers. We will be able to invite them to special events, tappings, and more. And a big piece is the beer finder, so if someone enjoyed the Exit 16 here, they could get back home and find out where it’s available in their neighborhood.”

Go to any craft beer festival and you’ll notice what Reilly saw during his many research trips: heads buried in mobile devices. By using the Craft Nation app, consumers will be providing both the brewery and its distribution partners with marketing data and ROI. I can’t help but think about all those social shares I’ve done for Flying Fish beers. Instead of retweets, I could have scored reward points!

As big beer increasingly bears down on small brands, a strong, devoted following is a key survival element for craft brewers. Craft Nation may very well be a big part of the arsenal in the battle to keep your favorite indie beers on the shelves and in production.