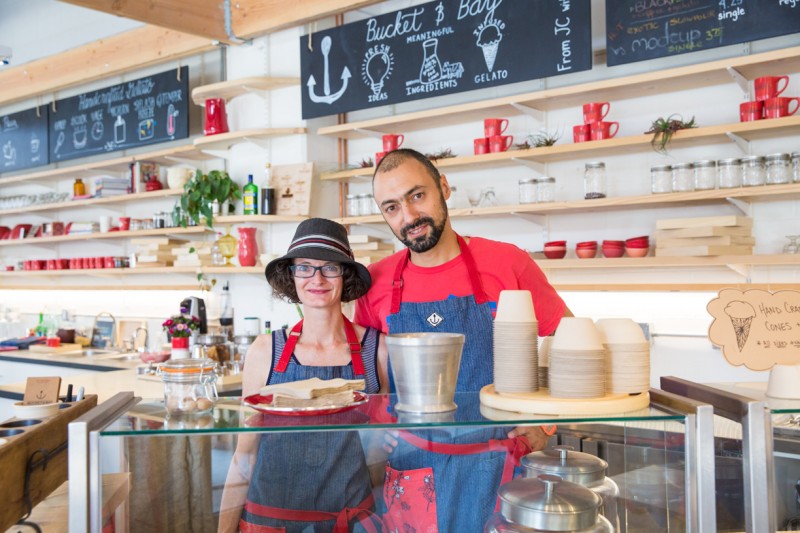 The Bucket & Bay Back Story

Jen and Boris met at a Thunderbird School of Global Management alumni event in Chicago. Jen was a 17-year finance executive when she realized she wanted to explore her passion for food and healthy cooking as a means to making a living. Boris was a marketing executive who jumped at the opportunity to start Bucket & Bay. Jen, whose relevant experience was limited to making gelato at home for her two daughters, took courses at the Institute of Culinary Education in Manhattan to expand her skills and Bucket & Bay was born.

For ice cream lovers unfamiliar with gelato, it’s lighter, fluffier and creamier than ice cream. That creaminess suggest a high fat content but it’s actually the opposite. Gelato has a lower fat content than ice cream, which has more cream and more air incorporated into it.

Bucket & Bay claims that using 100% organic grass-fed milk is what sets its gelato apart from the rest – after sampling the product, I completely agree, it’s superior. After months of searching for a local, sustainable source of milk, the duo selected Oasis at Bird-in-Hand, an Amish farmers’ cooperative in Pennsylvania, two hours away from the shop, that produces 100% grassfed, organic milk from heritage breeds such as Linebacks and Jersey cows. The high buttermilk content of the Oasis milk creates a distinctively clean and fresh taste. Jen and Boris also sell Oasis brand milk and butter at their store.

Bucket & Bay has a rotating lineup of 12 flavors. The signatures include Deep Dark Chocolate, Rose Latte, Mint Chip, Vanilla and Black Label Vanilla. When I visited in late May, I indulged in several gelatos including the outstanding Deep Dark Chocolate made with Raaka raw 71% dark chocolate and the Black Label Vanilla made with Johnnie Walker Black Label. I also enjoyed a few seasonal flavors including Red Eye made with cold brew coffee and espresso, Dark & Stormy with Gosling’s Rum, Mango Smoked Cardamom and an ingenious flight or tequila-infused gelato. Gelato and sorbets are served by the cup or in handmade, gluten free, crunchy-perfect waffle cone. You’ll want that cone. And you’ll dream about it after you visit. Bucket & Bay has recently deployed two gelato carts fashioned from Virtue Bike School Bus carts. The carts are located in Jersey City’s Exchange Place and in downtown Hoboken. They feature six-eight flavors of gelato and even have their own Instagram account for fans needing constant reminders of how fabulous this product is.

Bucket & Bay also offers catering, hosts special events and teaches gelato classes. Sign up for the shop’s newsletter to keep up with all the news and happenings.