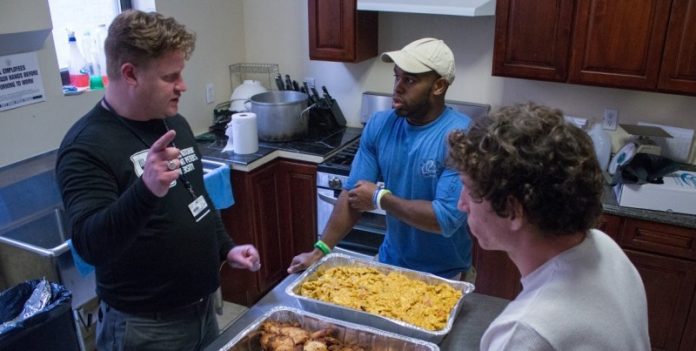 It’s no secret that far too many Americans struggle to feed themselves and their families.

There is one team of heroes at Saint Peter’s University that’s taking an active stand to diminish these statistics, and instead of wearing capes and tights, they are wearing hairnets and aprons. They pool their efforts as the Saint Peter’s University chapter of the Campus Kitchens Project, run under the direction of Erich Sekel, associate director of Campus Ministry for Community Service.

Four days a week, the team cooks and prepares food that is then delivered to various locations around Jersey City. Sodexo, Saint Peter’s dining services provider, is the largest sponsor of the project. “We are always on call to pick up food donations, whether that be from Sodexo or any other donors that may call,” said Sekel. “We cook when we need to but for the most part, we pick up food each day.”

Since the chapter’s launch in 2014, the program has delivered over 16,000 meals to families and shelters in the Jersey City area. Sergio Neiza, a senior at Saint Peter’s, has been a part of the program since its start.

“I was doing other community service for two years when Erich Sekel told me about this project he was starting,” said Neiza. “I’ve been a part of it ever since.”

A number of establishments have partnered with Saint Peter’s to supply the kitchen with food that would otherwise be thrown away. The team creates free, healthy meals by using the donated food from businesses such as Goldman Sachs, Table to Table, and Super Hero Sub Shop. Sanket Kumar, a freshman at Saint Peter’s, was looking to volunteer on campus when Campus Ministry suggested the Campus Kitchen.

“I thought the program sounded perfect for me,” Kumar said. “I’m doing what I can to help out and that’s what I always try to do, no matter where I go.”

The national Campus Kitchens Project trains students in leadership and community service. By taking the initiative to run a campus kitchen, volunteers develop entrepreneurial and leadership skills that they will find beneficial in future careers. Laura Toscano, the director of the Campus Kitchens Project organization, spoke further on the project. “Creating a Campus Kitchen is such a sustainable solution to the problem of hunger—we just need to envision the school’s role as part of the surrounding community in a new way,” she said.

Each spring, the Campus Kitchens Project conducts a student leadership survey. Most recently the organization found that 97% of participants feel more confident in their leadership abilities and 100% believe they have contributed in a valuable way to the community.

“Coming out to Campus Kitchen and helping prepare food for people who need it is a great way to spend your time,” Kumar said. “Whatever time you can spend helping other people is definitely time well spent.”

Whether they are getting their hands dirty in the kitchen or hand­ delivering meals, these heroes are fighting for a great cause—and making a difference every day. Visit the Campus Kitchens Project website to learn more.