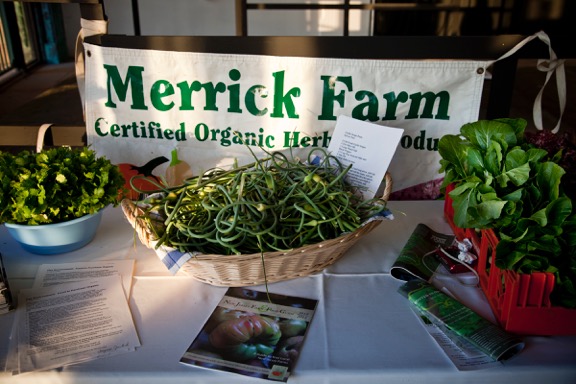 Being from Monmouth County, I know a few things about the culinary scene. Two things in particular: 1) Chef and restaurateur Marilyn Schlossbach is a do-gooder, especially when it comes to local communities; 2) The county is home to one of the first organic farms in the state, Merrick Farm. What this Monmouth County resident didn’t know was that these two institutions have been partnering up for a while and have joined forces to support one critical cause: to save Merrick Farm through a campaign called Regrowing Merrick Farm, on Barnraiser. (donations are being accepted until April 15!) Merrick Farm has been a source of community pride for over a hundred years. In 1991, third-generation family member Susan Keymer became the steward of the farm and, according to Schlossbach, grows some of the best produce in the state. The two met when Schlossbach first started cooking and Keymer has since grown specific, items including herbs, that the restaurateur and chef couldn’t find anywhere else.

After a three-year rest, as it’s described on the farm’s Facebook page, in 2014, Keymer, her family, and loyal staff nurtured and recouped the fields with cover cropping, hoping to bring the farm back to life. With the help of the community, Schlossbach and Keymer hope to raise $20,000, which will help them refurbish the greenhouse structure and upgrade essential field equipment used to prepare and plant fields so they can continue to grow clean, organic, and local food for their community.

“Any creative person committed to their craft may not always be the best marketer,” said Schlossbach. “That’s where we come in. We know they know what they’re doing, and we’ll handle the rest.”
In addition to helping Merrick Farm get up and running again, Schlossbach’s ultimate goal is to buy the produce from the farm for use in her six restaurants including Langosta Lounge in Asbury Park, Labrador Lounge in Lavallette, Pop’s Garage in Asbury Park and Shrewsbury, Asbury Park Yacht Club, and the recently acquired What’s Your Beef in Rumson.

Schlossbach hopes that in two years her restaurants will be able to keep the farm financially stable by becoming a consistent purchaser of the produce, establishing aquaponic greenhouses, and growing more specific varieties for the restaurants. “We spend hundreds of thousands of dollars per year on produce for all the restaurants and a percentage of that is local and organic,” said Schlossbach, who hopes to increase that percentage. “Because our menus seem foreign, many people don’t correlate us with farm-to-table dining, but we are. A lot of the ingredients we use can be grown locally.” When Schlossbach and Keymer succeed, you can be sure Schlossbach’s restaurants will be getting their garlic, everything from ramps to scapes and bulbs, from Merrick Farm who grows the “best garlic” Schlossbach has ever had.

For more information or to donate, click here. Donations can range from volunteering to contributing $5,000 (which includes an eight-person, private-chef dinner from Schlossbach) and everything in between (including gift cards to any one of Schlossbach’s restaurants).

“We want to stay committed to what we love, keep affordability for our customers, and show people who we are on a fundamental level,” said Schlossbach. “It’s very personal to me that [Keymer] stay there. We’re trying to preserve the Garden State and continue to eat local.”