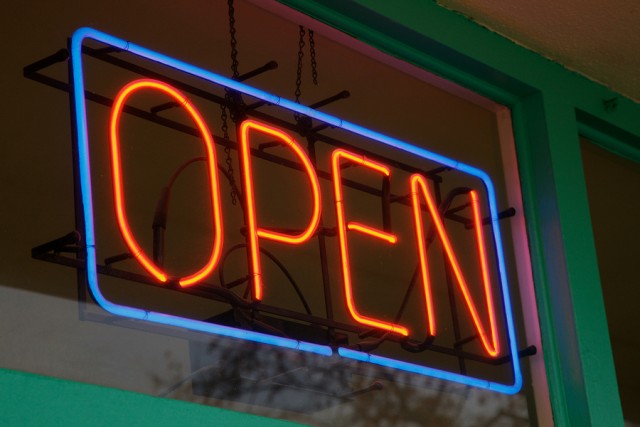 Spring has sprung with the latest edition of Jersey Bites Buzz, Susan Bloom’s look at several openings around the Garden State. Have a restaurant/food outlet opening, closing, or other key development to share? Email your news to info@jerseybites.com.

This Greek eatery features such authentic dishes as pastitsio (Greek “lasagna” made with lamb and beef), souvlaki, gyro, and moussaka. Among its most popular dishes is its octopus appetizer, “which we serve grilled over a bed of fava beans with onions, olive oil, and a lemon reduction,” said server Simon Lambrinos. Seating 45 and serving lunch and dinner, Lambrinos said that business has been strong and that the restaurant has earned many regulars within the Cranford community. With its March 23 opening on Summit Avenue in Jersey City Heights, Choc-O-Pain officially launched its third location (its flagship location is in Hoboken and its second location is about 10 minutes away, also in Jersey City). “People appreciate our quality and authenticity,” said co-owner Clemence Danko of the shop’s signature French-style pastries, which include croissants, chocolate croissants (pain au chocolat) and individualized petit kouign pastry, inspired by a cake from Brittany that features caramelized layers of dough filled with raspberry, apple, or chocolate chips. “We also offer our own blend of Mod Cup coffee, a locally made, small-batch brand that’s becoming increasingly popular in the Jersey City area,” Danko said. Sharing space with an all-natural skin care products company, the newest, 20-seat Choc-O-Pain location offers individualized coffee made to order in a peaceful setting with relaxing music that invites guests to take their time and savor the experience. “We’re extremely humbled by the way the neighborhood has welcomed us and we’re excited to offer products of such quality,” Danko said

Officially opened on March 29 by Australian-born chef/owner Ehren Ryan and his wife, Nadine, Ryan describes the locally and seasonally-inspired menu at Common Lot as “modern American with global influences.” Among the restaurant’s signature appetizers are salmon sashimi with a pickled daikon and ponzu dressing and slow-cooked duck egg with duck prosciutto and spaetzle infused with hazelnuts. Popular spring entrées include butter-poached halibut with peas, morels, and fava beans as well as duck ragout with house-made gnocchi and beer-infused tomato sauce. At the quaint 64-seat eatery, “we have a rustic casual décor in gray shades with a lot of metal and reclaimed wood,” said Ryan, who hopes to appeal to a local clientele that’s used to traveling to New York City to enjoy this level of dining. “We offer fine dining without pretention and a fun, relaxed, yet elegant dining experience,” he said. Celebrating its official grand opening on March 25, this shop offers a healthy selection of fresh wraps, salads, sandwiches, gourmet coffee, smoothies, and more. In addition to such popular smoothies as its Peanut Butter Cup, Anti-Oxidant Blast, Green Balance, and I Love Veggies options, manager Steve Sumler said that visitors shouldn’t miss the Fifth Street Panini, which features chicken, turkey, or ham with asiago and fontina cheese and homemade Greek yogurt pesto, or homemade chicken salad. Formerly a deli, the remodeled shop features new floors, a customized counter, and beach/surf-related décor that reflects the best of its North Wildwood setting. The eatery is currently open Wednesday through Sunday but will soon be open for extended days/hours with additional outside seating this spring/summer. “We’re a unique place to enjoy great-tasting food made with healthy ingredients,” Sumler said. This trendy outlet offers fresh cold-pressed juices incorporating all organic ingredients, smoothies made with homemade cashew milk, and homemade vegan desserts and energy bars. “Our best-selling drinks include our Green Colada, made with kale, pineapple, cucumber, and wheatgrass, as well as our Chocolate Cashew Milk, made with raw cashews, raw cacao, dates, sea salt, vanilla, and filtered water,” said store manager Eugene Onishkevich. “These highly nutritious drinks are also beneficial for the environment because all of the produce we use is organic and free of chemicals and GMOs, and we also compost and recycle everything we can as part of our business model,” he said. “I’ve been juicing for years and it’s something that I’m passionate about,” Onishkevich added. Opened in mid-March with a grand opening on April 1, Java Love’s newest location, on Church Street, joins its original location roughly two miles away on Montclair’s Bellevue Avenue, which opened three years ago. “Specialties include our Cortado, a shorter latte in an eight-ounce cup that’s stronger and creamier than a 12-ounce version, as well as raw bars (pictured at right) made with healthy, gluten-free ingredients like honey, peanut butter, and sesame seeds,” said Gabriel Girard, assistant manager of the Bellevue Avenue location, who added that Java Love’s signature Monut (a muffin-style donut made with cinnamon and Nutella that’s baked instead of fried) is also a big seller. As part of Java Love’s business model, employee-contributed seasonal drink concepts, aka The Hot List, will be featured on a blackboard as you enter and help create a welcoming and family-like atmosphere. There’s no doubt that Montclair has a competitive independent coffee shop market, but Girard said, “Every place caters to a different audience, so there’s room for everyone to coexist. We’re a very community and environmentally friendly destination and are excited to share the love with our products and service.” Opened in early March within Elizabeth’s historic railroad station, this restaurant features the best of Colombian and Latin dishes artfully prepared by Chef Andrew DiCataldo. According to Manager Fabian Huerfano, signature dishes include Bandeja Paisa, a Colombian combination of grilled steak, sausage, rice, beans, sweet plantains, fried pork skin, sliced avocados, and fried eggs, and Churrasco, featuring marinated grilled steak topped with chimichurri sauce and served with sautéed spinach and fingerling potatoes. “We also offer sugar cane-based Aguardiente, the national drink of Colombia, infused with a variety of different flavors, as well as specialty tequila drinks and guaritos, which are like mojitos made with Aguardiente,” Huerfano said of the new restaurant, which seats 90 inside, will offer outdoor seating as the weather gets warm, and also features live music on Friday and Saturday nights. “We’re excited to bring Colombian food to a new level in this beautiful and historic setting,” he said.

Launched by International Culinary Center-trained and veteran chef Rob Ubhaus and his wife Danielle, Redux offers “relaxed comfort food with an emphasis on small plates, plate sharing, and a reduction in formality,” Ubhaus said. Popular menu items include the Disco Fries, made with Yukon Gold potatoes and gourmet brie, and housemade tagliatelle with a lamb ragout, not to mention a coveted seat at the kitchen counter, which offers up to 10 lucky diners an unobstructed and interactive view of Ubhaus and his team at work in a professional kitchen. For those on the move or dining at home, Redux also features an adjacent market offering a broad range of prepared meals, cheeses, charcuterie, and grab-and-go sandwiches, salads, soups, and other items that are great for takeout or parties. For more Jersey Bites coverage of Redux, check out Veronique Deblois’s recent article here! Opened on March 24, “we’re about bringing traditional BBQ to New Jersey,” said co-owner and veteran shore-area restaurateur Vic Rallo, who noted that their staff was trained by BBQ aficionado Bill Durney, owner of Hometown Bar-B-Que in Brooklyn and one of the most renowned pitmasters in the nation. According to Rallo, visitors shouldn’t miss Surf BBQ’s brisket, which is expertly smoked and seasoned over a two-day period to ensure the utmost flavor and tenderness. In addition, “our pork spareribs are second-to-none, our house made baked beans are infused with the tips of meat that we smoke, and our cabbage-based, lime-dressed Surf Slaw has an acidity and crispness that pairs perfectly with our meats,” he said. Formerly Molly Maguire’s, Surf BBQ offers first-come, first-served seating at 14 tables within a “warm and comfortable” décor that features a new bar, reclaimed wood floorboards and ceiling beams, and industrial accents. Rebuilt on the site of the former New Orleans Steakhouse and opened in early December 2015, this new American grill and craft beer house offers classic American comfort food with a twist. According to co-owner Tom Apostolopoulos, visitors to the 180-seat, fully-remodeled restaurant are enjoying all of chef Max Mraz’s menu items, from gourmet wood-fired pizzas, juicy burgers, and chicken and waffles to tender short ribs, Asian-inspired seafood options, and creative vegetarian/vegan dishes along with an extensive selection of craft beers from such local brewers as Angry Eric in Lafayette and Carton Brewing in Atlantic Highlands. Within its hip and industrial setting, “we’re a great place to meet and we’re excited to be one of the area’s newest dining destinations,” Apostolopoulos said.
. On April 13, Whole Foods Market officially opened the doors of its newest location in Wall, a 39,000-square foot store which represents Whole Foods’ 15th store in New Jersey and third in Monmouth County. The day opened with the company’s traditional bread-breaking ceremony at 8:45 a.m. followed by an array of tastings, vendor samplings, sales, giveaways, and other events for the entire community. “This is a great opportunity for Whole Foods Market to bring our store a little closer to home for the residents of Southern Monmouth and Northern Ocean County, who have long shared with us their interest in having a Whole Foods Market nearby,” said Michael Sinatra, PR Director for Whole Foods Market, Northeast Region. “It’s also going to be a great location for seasonal residents and visitors who frequent area beaches, as we’ll have a wide assortment of prepared foods and dining options in addition to our array of unrivaled natural and organic grocery items.” Melissa Beveridge was there for opening day, and covered it for Jersey Bites.