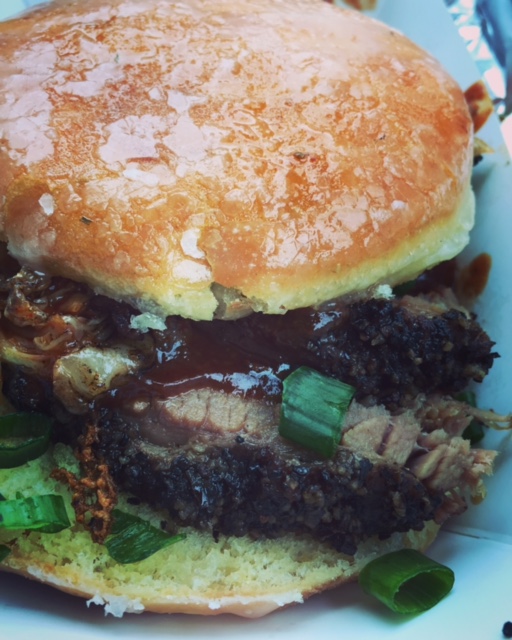 After finding success in a food truck or at festival stands for many years, Kimchi Smoke owner, Robert Cho, has an impressive number of medals, awards and trophies. And at his newly opened brick-and-mortar store in Bergenfield, Cho demonstrates that it’s possible to sink one’s teeth into a perfectly cooked slice of brisket, with just the right fat-to-meat ratio. Being in a restaurant space is a big change for Cho and his team. Some things, however, will stay the same: the diminutive kitchen space and the spicy, juicy and addicting meats he smokes.

The menu is a fusion of southern Texas and Korean barbecue featuring smoked brisket, pork spare ribs, and smoked kimchi. (If anyone else is smoking kimchi in these here parts, I’m not aware of it.)

The menu is short and sweet, and when we visited during soft-opening week, we opted for the Korean redneck tacos ($10), and, since it’s described as “life-changing,” the chonut 2.1 ($14). The tacos are filled with pulled pork, Fatboy BCS (bourbon chipotle sauce), Korean slaw on flour tortillas. The pork was moist and flavorful and the sauce a perfect blend of sweet and tangy. One thing that could have made the tacos better: corn tortillas. Onto the Chonut 2.1: 12-hour smoked brisket, Fatboy BCS, smoked kimchi, cheddar cheese and bacon on a glazed doughnut. Yes, it sounds rather odd and a bit unhealthy, BUT, that was just a passing thought after I took my first bite. The brisket is masterfully cooked with a peppery bark on the outside and a juicy, perfectly fatty (I mean this with the utmost respect) inside. The spiciness of the kimchi and smoky bacon flavors are balanced out by the sweet glazed doughnut—an outstanding sandwich. On my return visit, I’ll probably opt for the Austin Cho—brisket, Fatboy BCS and smoked kimchi on brioche in order to just taste that wonderful brisket.

More About the Brisket

I feel like I need to say more about the brisket. I’m a fan of brisket but hardly ever find a version worthy of the calories—whether it’s smoked or Kosher-style. Kimchi Smoke makes the best brisket I’ve had in the area, and perhaps northeast of Texas. Cho proudly offers a photo gallery of his brisket that’ll have any carnivore drooling.

As I mentioned, our visit was during soft opening week, so I’m understanding of couple of issues we ran into. Though primarily a takeout establishment, Kimchi Smoke offers seating for up to seven—two stools at a counter were not accessible due to items in the way. It also took a while to have someone take our order then a while to get our order, but this was OK as the open kitchen was thoroughly entertaining. Signage is at a minimum so folks driving need to look for a hanging sign, but I’m guessing this is temporary. Since the seating was limited, we got the food to go. This is fine, but there needs to be a ton of high quality napkins placed in the to-go bags. (The sandwiches are fabulously messy.) I applaud Cho on his passion and desire to take his business to the next level. I will be returning with my bib on.

Connect with Kimchi Smoke on social media and tag #KimchiSmoke when you visit!

Deborah Smith, Executive Editor - February 25, 2021
Mushrooms have really been making headlines lately and no, I am not here to talk about the psychedelic variety. Last year, I was introduced to...

One Restaurateur’s Struggle, Shared by Many