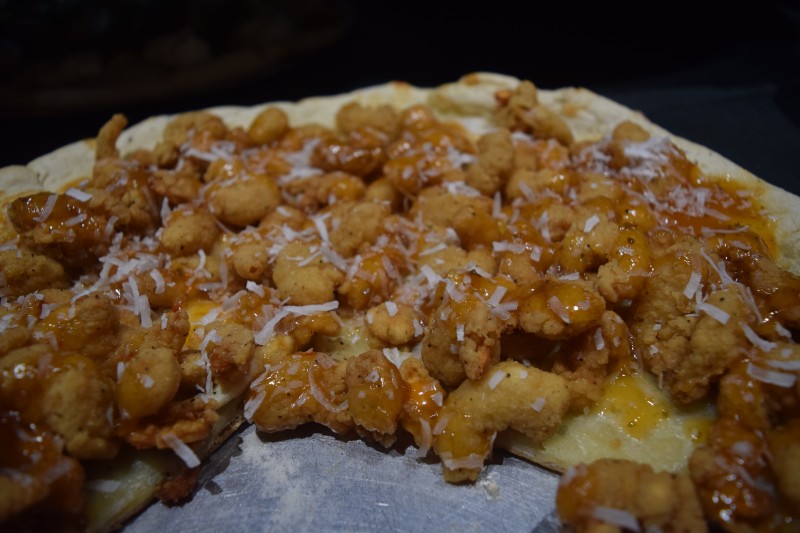 To say that Marco and Michael Colandrea were raised with a passion for pizza would be an understatement. What they create at Nunzio’s Kitchen in Sayreville is not your average pizza. What they create will have you questioning everything you thought you knew about the plain cheese slice.

These pizza Picassos are the owners of the award-winning restaurant known for its gourmet pizzas that take the Italian favorite to a new level, with toppings that run the gamut from mac ‘n cheese to mashed potatoes (and many options in between).

Of the 99 types of pizzas at Nunzio’s, you can find 40 to 60 filling up the display window on any given day.

But the restaurant wasn’t always this creative with its cuisine.

Before the chalkboard walls went up, the book shelves holding plaques appeared, and the indie tunes starting playing, Nunzio’s Kitchen looked like a standard Italian pizzeria with green and orange walls, and souvenir pizza boxes and photos of Italy on the walls.

When the Colandrea brothers took over the business eight years ago, the restaurant interior changed and so did the pizzas. They had a vision to break the mold with more creative offerings. Making sure not to ruin the reputation their father had worked hard to build in the community since 1979, while also trying to create one for themselves, the boys made changes little by little. They started with buffalo chicken and cheesesteak pies. Once those got positive responses from their customers, the brothers decided to see how far they could push the pizza limits. Thus the chicken-and-waffles pizza was born.

Laden with chicken, American cheese, and a drizzle of syrup over a French toast crust, this pie not only sat well with the customers, but it continues to be one of the best sellers.

The positive response led the brothers to some other unique pizza ideas—with names to match.

Many of their pies have pop culture-inspired names, like the Wu Tang shrimp (pictured at top), which is covered in sweet and sour coconut shrimp; the Garfield, which has ground pork, beef, ricotta, and mozzarella, naturally; and Candy Land, which is loaded with slow-roasted corned beef, jalapenos, sour cream, and candied bacon.

Nunzio’s Kitchen has a slice to satisfy all cravings.

Need a savory fix? Give the Hugo Stiglitz slice a bite for a mouthful of barbecue pulled pork and green apples.

Have to satisfy your sweet tooth? The dessert pies, like the Nutella and cannoli cream, will do the trick.

Using only fresh, organic, local, and GMO-free ingredients, the Colandrea brothers have won awards for best pizza and best Italian restaurant six years in a row. But it’s not just the pizza that brings home the bacon (hey, meat lovers, there’s a pie for you, too!) for Nunzio’s Kitchen. It’s the rapport the staff has with the clientele. Friendly, energetic, and personable, the staff at Nunzio’s treats every customer who walks through the door like an old friend, and in some cases they are. Marco says that many of their customers have been loyal since before he and his brother took over the business.

While chatting with Marco, multiple customers waved or stopped to converse and briefly catch up. A few even popped their heads behind the front counter to say hello to the staff, with whom some of them have developed friendships.

If you’re ready to step up your pizza game, pay Nunzio’s Kitchen a visit.

Come for the food. Stay for the friendly environment.