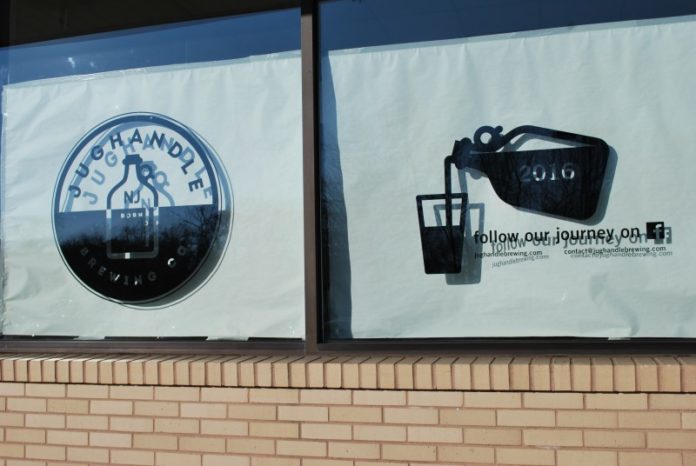 What better way for a beer writer to celebrate a new year than by visiting a new brewery? Thankfully, here in New Jersey, that’s not hard to do. You don’t even have to travel far. According to that ubiquitous source for craft beer in the Garden State, NJ Craft Beer, there are 42 operating breweries with another 26 startups on deck.

One of them is Jughandle Brewing in Tinton Falls.

At Jersey Bites, we love a good double entendre so I just had to go pay them a visit and see how things were progressing. Here’s what I found: You’d be hard pressed to pick a better team than the three guys responsible for Jughandle. Pete Artherholt is a chemist, carpenter and home brewer. (His wife, Darlene, is a microbiologist to boot.) Besides being another home brewer, Chris Hanigan is also a graphic design and marketing guy. Rounding out the roster is Mike Skudera. He’s the business guy—and the ex-mayor of Tinton Falls. I’d say the bases are covered.

I showed up on a Saturday and all three partners were there putting in their sweat equity. This a DIY project. Table saws, two-by-fours and tile were the order of the day. They have only contracted out for plumbing, electric, and concrete for the brewing area. Their NJ brewing license in Trenton and the brew house equipment is on the way. Since there was no beer to taste (Kane is only a few minutes away so I stopped there afterwards), I had to ask what will be on tap once they open in the spring. Here’s what I learned: the focus will be on an entertaining and interesting tap room. Standards like IPAs can be expected but I’m told they make a killer Heffeweisse. There was also talk of a tart Berliner Weisse complete with homemade “mit schuss.” (That’s the sweet flavored syrup that German’s often add to that style.) I haven’t seen that in a tap room recently.

Another idea they’ve been kicking around is to offer crowlers, which are 32 oz. cans that can be filled and sealed right there on the bar top. A novelty to be sure, but it will keep beer fresh three or four times as long as regular glass growler. There is also a sense of community at Jughandle. Like most pros, they have their roots in home brewing. Since there is no local home brew club, they are definitely looking to engage local hobbyists.

They’re hoping for an April or May opening, so keep an eye on their Facebook page for updates.