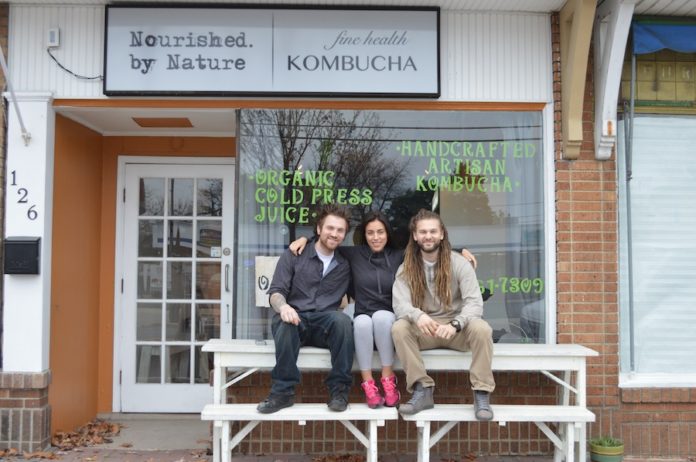 A few months ago, I was driving through Bradley Beach, a drive I do pretty regularly, when I saw Kombucha in bold letters on a storefront. I immediately pulled over and investigated. Turns out, this little store is the equivalent of a one-stop shop for freshly made juices and uniquely flavored kombucha flavors. But wait—a few of you may be wondering, what, exactly, is kombucha? This powerhouse drink starts out with organic tea, purified water, and evaporated cane sugar. The key ingredient? The scoby: a symbiotic colony of bacteria and yeast that basically ferments the tea over a period of 7 to 14 days. During that process, the sugar is converted to small amounts of alcohol and then into acetic acid, which gives “the booch” its slightly sour taste. The fermentation process also creates an environment where probiotics, antioxidants, enzymes, and organic acids are all created naturally. Then come the herbs, fruits, and spices. The result? A slightly sour, effervescent, and bold drink that comes in a variety of flavors. Loved by many for its immune boosting properties, it can be a great addition to your diet because, frankly, it’s delicious to drink.

Brothers Shawn and Ryan Kelly opened the doors to Fine Health Kombucha in July 2015, becoming New Jersey’s first brick and mortar kombucha store in Bradley Beach. Joining forces with the Kelly brothers is Cassandra Quarantello of Nourished By Nature. The three met by chance and decided to pursue their dream in what Quarantello called a “health nook” of an area. Now that you have an understanding of what they’re selling, let’s talk about how they’re selling it. Fine Health Kombucha is set to bring a little creativity to the scene. Stop by and enjoy one of 12 core flavors from the case or bring in your bottle for a refill from the rotating specials on tap, which have included a basil kombucha. The brothers are even bringing kombucha to the road with their “booch mobile,” which you can expect to see driving around the Jersey Shore in early spring.

For those who just can’t get into the fermented drinks, the Kelly brothers also create a number of non-kombucha drinks including immune-boosting Switchel (made of water, vinegar, ginger, and maple syrup), healing Chaga mushroom tea, and a detoxing bentonite clay. And of course, there are also fresh juices from their partner in health, Nourished By Nature. Also following her passion for health, Quarantello, who comes from a large Italian family, shares how juicing was a catalyst to a healthier lifestyle. It wasn’t until a year ago that she took the plunge and began selling special-order juices, including her best seller, Grateful Green, out of a commercial kitchen. When the opportunity to share her rotating line of juices came along, she took it. Thanks to her, I have become completely obsessed with the seasonal creation, the Ginger Snap Apple featuring apple, ginger, lemon, and turmeric. The perfectly in-season juice.

Despite the small space, there’s plenty of room to sit down on the couch, relax, and even do some work with the free wifi. They’re creating a coffee shop culture—sans coffee.