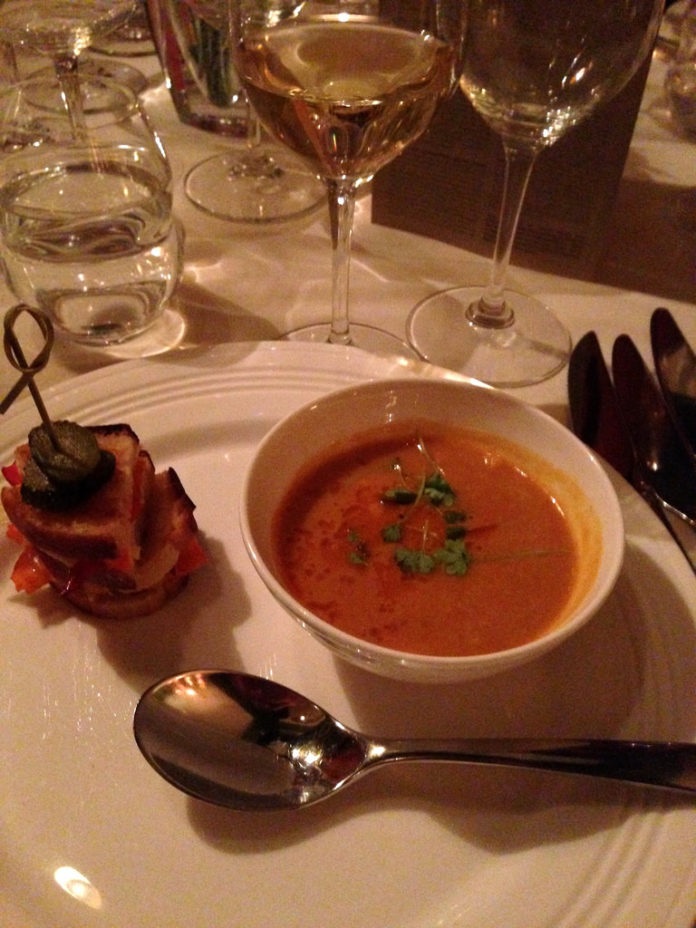 If you use sustainable, local foods and patronize restaurants that do the same, you are part of an international movement. You may not know that James Beard, one of America’s great chefs, was a strong advocate of using in-season local foods in everyday cooking. You might say that he was a founding father of farm fresh food long before it became trendy.

Last spring, John and I had the good fortune to dine at the James Beard House, which is Beard’s former townhouse in Greenwich Village. The Beard House is operated by the James Beard Foundation, which describes its mission as “to celebrate, nurture and honor America’s diverse culinary heritage through programs that educate and inspire.” The Foundation sponsors dinners at the Beard House and other locations around the country where leading chefs prepare wonderful meals paired with great wines. These events raise money for culinary scholarships, food industry awards and conferences, and other food-centric causes.

My employer has a membership at the Beard House, so we get advance notice of upcoming events. Since we had spent our first night as a married couple in Rehoboth Beach, Delaware, we thought it would be fun to check out Matt’s Coastal Legacy. The dinner honored the late chef, entrepreneur, and philanthropist Matt Haley, and each of the chefs worked at one of his SoDel Concepts restaurants. Matt Haley has quite a story: here’s the Ted Talk he delivered just two weeks before his tragic death in a motorcycle accident.

After we arrived at the Beard House and checked in, we got to walk through James Beard’s very own kitchen, where the team of chefs was busy working their magic. The evening began with a cocktail hour with decadent hors d’oeuvres such as duck fat biscuits with picnic ham, black pepper, and apricot jam, as well as deviled eggs, curried goat momo, pork belly pinchos and miniature pupusas. In addition to sampling a lovely Prosecco, we also were offered a Haley’s Comet, a delectable mixture of dark rum and homemade apple ginger soda. We were a bit jammed into the small room in the rear of the townhouse, but the close quarters made it easy to meet and chat with some of the other guests.

After an hour or so, we were ushered upstairs to the second floor of the house. We were lucky enough to be seated in an area that used to comprise part of James Beard’s bedroom! For our first course, we sampled silky smooth rockfish which was playfully garnished with popped corn, Meyer lemon, celery leaf and Himalayan sea salt. It was paired with a Jean Marc et Matthieu Crochet Sancerre. The sweetness of the Sancerre married beautifully with the rockfish. Next, we had a lobster bisque (pictured at top) paired with a Bouchaine Chardonnay that was positively ethereal. Our journey under the sea continued with a butter poached tuna which was nicely finished off with watercress and scarlet runner beans and a Conti Di San Bonifacio Monteregio. Next, we sampled caramelized day boat scallops with grits, kimchi, pork collards and a corn bread crumble. A Domaine Carneros Pinot Meuier completed this portion of our meal. Fortunately, the portions were small enough to leave room for our enjoyment of a peanut butter blondie with chocolate burnt Fluff. We veered away from the wine this time, since a Sweet Baby Jesus Chocolate Peanut Butter Porter was served with our last course. How fun is that?!

In addition to enjoying all of the amazing food and wine that came our way, one of the additional joys of dining at the Beard House was sharing our table with several other diners. The included Gordon (a musician who lived around the corner from the Beard House), Sue (an aspiring sommelier) and Randy (who, with Matt Haley served on the board of La Esperanza, a community service organization designed to help Spanish-speaking immigrants). It was so much fun to compare notes with fellow food and wine fans and to enjoy the special experience of dinner at the Beard House with them! It was also moving to hear a tribute to Matt Haley—many of our fellow diners were members of his restaurant family or had other personal connections.

While James Beard Foundation members get early notice of reservation opportunities, the Beard House sometimes has availability to members of the general public. News of upcoming events at the Beard House can be found here. While not inexpensive, dining at the Beard House is something to put on your culinary bucket list if you are able. Even if a dinner there is not in your budget, the foundation has many wonderful recipes to help you showcase your culinary genius at home.