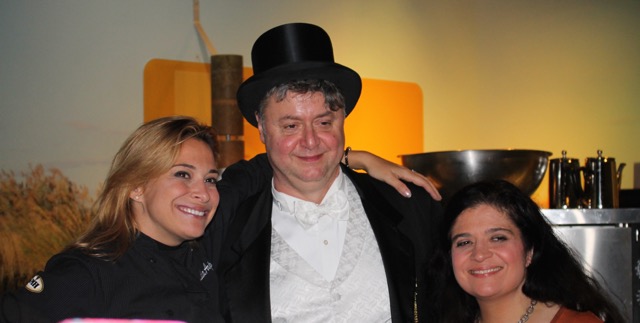 It’s one thing to watch chefs on TV do their thing: adding spices here, tasting over there, all while making it look effortless. It is quite another thing to see them in action, in person. As was in my case when I was lucky enough to watch both Alex Guarnaschelli and Donatella Arpaia put their culinary talents to great cause while recreating the final 10-course meal served aboard the ill-fated RMS Titanic.

Upon walking into the kitchen area at The Liberty Science Center, I was immediately drawn to Chef Guarnaschelli meticulously adding micro greens atop her cold asparagus vinaigrette dish. She was focused and direct with her staff, showing me that her talents go way beyond the TV camera. Then, while posing for media photos, I witnessed how Donatella switched from Kodak moment to Chef moment so she could check for spices within the soup duo of the night.

So this was the beginning of my night where the main attraction had nothing to do the backroom kitchen. Titanic: The Artifact Exhibition, which opened October 31, is an exhibition that would make any historian (or fan of that Leo movie from way back) proud.

Here are just a few of the many elements of the exhibit that I found interesting: Seeing the replica of both the first-class and third-class staterooms—talk about class distinction! Artifacts displayed there included actual makeup compacts retrieved from the ocean floor and miniature teacups for children on board to play with. Amazing. Another highlight was the boarding pass. Upon entering the exhibit, you essentially become a passenger, complete with an “identity” that includes your age, reason for traveling, and last, but certainly not least, your class. I became Miss Berthe A. Mayne, 24, from Brussels, Belgium. Did I survive, or not? Well, I can’t tell you my entire life story. You can check the wall when you go and look to see if she made it.
Now for that meal. First class was indeed royalty upon that ship. 10 courses, spanning hours, met these wealthy travelers each night aboard the ship. Through speeches throughout the courses, I was interested in learning how food being locally sourced was not all the rage as it is these days. Peaches were flown in from Africa while the squab was brought in from Egypt, this so that the diners were treated to the very best. (Cost was not an issue for this crowd.) Another tidbit quite entertaining-the squab was the only dish allowed to be eaten with fingers. Hhhmm, I wonder how many ladies pushed up their lace sleeves and got to work. Wondering what else was served beyond the peaches and squab? In short, a lot. In more detail, it started with oysters mignonette, served on a bed of sea salt, briny like the ocean they were served upon. Next was the aforementioned soup duo aforementioned. I enjoyed the cream of barley more than the consommé. Course three was the cold asparagus vinaigrette, beautifully plated with both green and white varietals. The course to follow was my favorite of the evening: Filet mignon with a truffle shaving atop, adjacent to chicken cooked with sweet, caramelized onions along with bone marrow stuffed zucchini. What’s not to love there? You might expect course five to be a lighter fare. Au contraire, my friends. Roasted duck with applesauce was plated on my fine china, other choices included lamb and beef sirloin. And this marked the halfway point. Enter a punch romaine, a sorbet-like course that cleansed a hard-at-work palate. Waitstaff presented us next with squab over bitter watercress, followed by poached salmon over cucumbers. Course nine was soon to arrive and it was as rich as its predecessors. Pate de foie gras to exact, because you can’t really be first class without foie gras, right? And finally, a sweet note to finish the marathon. Waldorf pudding was served to us dolloped with, but of course, French ice cream. (Sadly, the original recipe sadly went down with the ship.) And if the pudding wasn’t your thing or you still miraculously had room, vanilla and chocolate eclairs appeared as the table centerpiece.
We learned that the second and first class passengers ate better than most travelers of their rank at the time. And now we know that no one went down hungry.
Titanic: The Artifact Exhibition runs through May 30, 2016. It is a must-go-to event that I look forward to visiting again.