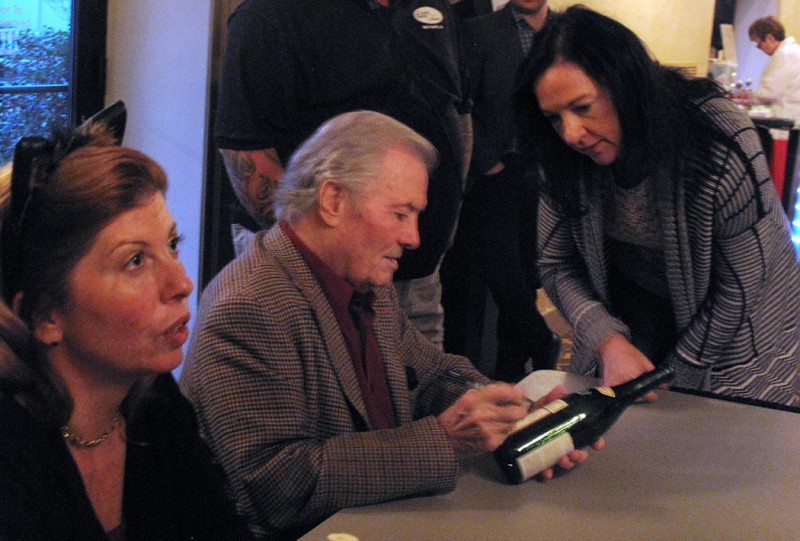 On Halloween, The Count Basie Theatre, in Red Bank, treated fans of Jacques Pépin with the opportunity to get up close and personal with him. As his 80th birthday approaches, Pépin shows no signs of slowing down. Early arriving guests clutched copies of his new book, Jacques Pepin: Heart & Soul In the Kitchen and well loved copies of his other two dozen books as they settled into the dimmed theater. Pepin stood alone on stage checking his ingredients. He came down from the stage to pose for photos with guests before launching into what they came to see: an impressive display of knife skills and culinary techniques from a chef they have grown to know and love from watching him cook on television.

Although Pépin said, “Very often I emphasize techniques; my cooking doesn’t emphasize decoration,” he started out by showing how simple strokes of the knife across a stick of butter and a bit of rolling results in a butter rose that he joked would add $25 to the cost of any restaurant dish served with it as garnish.

The audience leaned forward and murmured appreciatively as they watched him reach into a bowl filled with fruits and vegetables and demonstrate how to cut them properly. Garlic, onions, leeks, asparagus, apples, oranges, cucumbers, parsley and a loaf of bread all became a blur under his knife.

He allowed the audience to pepper him with questions while he worked. When asked what his favorite meal is he answered, “What is at the market or in the garden? Is it hot? Is it cold? Do you have a hangover?” he paused to take a sip of wine. ”What are you in the mood for? It changes all the time.”

He answered a question about the nuances of olive oil while making mayonnaise, purposely causing the sauce to break and then showing how to fix it again by slowly whisking in an egg yolk and a splash of vinegar. His most impressive feat was deboning a chicken and stuffing it with a mixture of the bread and vegetables he had just chopped. He deftly tied it with twine into a compact roll.

This trip to Red Bank was special for Pépin. His wife, Gloria, graduated from Red Bank High School and has fond memories of her time living there. They attended her 40th class reunion a few years ago. Heart & Soul focuses on the way Pépin cooks at home. Dishes to please his wife’s love of fish and shellfish are plentiful. These are quick and easy to prepare. In just a few moments, he made an instant gravlax by thinly slicing salmon and topping it with onions, parsley, and capers. The final recipe he prepared during the show was a shrimp burger inspired by years of vacationing in Mexico.

Pépin’s 13th and final PBS show, Jacques Pepin: Heart and Soul, is currently airing. The companion book is accessible and inspiring with a focus on foolproof recipes that include favorites from his childhood and those he has picked up on his travels around the world. At the end of the day, he sat in the lobby and signed books with the tagline “Cook with Love.” This book will make that infinitely easier for the home cook.

Prior to Pépin’s visit to Red Bank, I had a chat with him about his new book, cooking with children, food waste, supermarkets, and more.

RACHEL WESTON: The first requirement for anything you serve is for it to taste good, not be an ambitious culinary experience. So many home cooks and chefs forget that. Is that focus what you want to share most with readers & viewers?
JACQUES PéPIN: That’s what cooking is all about. The most civilized action we do is to share food together. At this point, the type of food that we share is the foods we had as a child. Very simple types of food as opposed to the type of food in great restaurants, which is good, too but there you cook more with your brain and less with your heart and soul. I have done so many books.  With this one, I just wanted to reminisce and go back to go the types of meals that we do at home.  There isn’t any type of order here. I have Chinese and Japanese inspired dishes, Puerto Rican, Cuban, French as well as Italian and others. It is just what we eat at home and I wanted to talk about that.

You dedicated your latest book, Heart & Soul in the Kitchen to your granddaughter, Shorey. How important has it been to you to teach your granddaughter and daughter how to cook? Is it something that people should really make sure they teach their children?
When my daughter was a year old, I held her in my arms and she stirred the pot. When she developed, she learned to taste. Coming back after school, the kitchen is a sanctuary. Those traditions, the stories of your mother, they will stay with you for the rest of your life. Those traditions are very important in our family. It doesn’t have to be a big production. It could be making a sandwich or very simple stuff.

The Praise for Wilted Vegetables section of Heart & Soul takes on food waste, which is unthinkable in a successful restaurant kitchen and is becoming a hot topic in the U.S. Do you get a little thrill from figuring out how to use every bit of leftovers?
Most professional kitchens I that go into, the first thing I do is to go to the garbage and look what they have. Sometimes I’m crazy.  What happened is that in Europe, and certainly in France, food is much more expensive than here. Here a chef may have the dishwasher also doing a salad. It doesn’t matter here. He gets the lettuce, cuts off the whole top, cuts the heart out and throws the rest out. The chef will tell me, the food is not that expensive compared to other costs.

When you have that kind of waste, it is from the lack of culture. When you go to other parts of the world, South America, Africa, China and in Europe, people care about the food more. Part of our tradition was you don’t throw anything out. My father would kiss a piece of bread.  If it got moldy, he would kiss it before he would throw it to the chickens. I was raised by mother and we don’t waste anything. Period.

We do fridge soup at least once a week. Whatever is left in the fridge—carrots, lettuce, a piece of meat leftover, or whatever I made the other day—goes into the soup. We finish it with some vermicelli or polenta or good bread. We do soup all the time.

Your recipes often include frugal options with little splurges. Pastured, farm fresh eggs are one of them. Should we be having eggs more often for dinner?
I’ve been here 65 years. Twenty years ago we were told to eat one egg a week. People wanted egg whites only. Now we’re back, fortunately to two eggs a day and there is no better protein than egg. There is no question that you should use organic eggs. I have an egg farmer close to my house where I go get my eggs. Even in the supermarket now, you can find very easily, organic eggs. It is better for the environment. And for the cost, instead of $2.50 a dozen, organic costs $4. For another dollar across a dozen, you only spend about 10 cents extra an egg for organic. That is worth it.  My mother would do a lot with eggs with mushrooms, potato, stuff like this. Eggs were a protein we ate more of than meat.

You are a fan of the supermarket and often use quick things such as pizza dough and rotisserie chicken that people can pick up while at the store. But you also love having relationships with your visit local farmers and fishermen.
Sure. It doesn’t have to be all of one or all of the other. People get crazy with that. Sometimes you can afford it. Sometimes you can’t. Another thing, also, I used to be a chef in restaurants. Chefs in great restaurants are under a great deal of pressure to create new stuff. I give classes. When I went to Chicago to do classes there, a French chef there, who is a good friend of mine, told me I’m bringing fantastic butter and this and that for your classes. I don’t want it. I want stuff that I buy at the supermarket. I am here to give a class. If I am a great chef at one of the greatest restaurants and I come to do a demonstration, I want to show you the extraordinary things I can do and entice you to come spend money in my restaurant. Whether you can do it [at home] or not is kind of immaterial at that point.

That is not my case. I don’t have a restaurant. I teach cooking to show how to people to cook—to demystify cooking. So I use whatever people use from the supermarket. And the equipment they would have at home. I try to get a good product, a good sharp knife, the same stuff people have at their house.

What do you think about the recent study the World Health Organization released linking processed meats to cancer?
Well, I tell you, 20 years ago, you could have one egg a week. You would die if you ate one stick of butter. It goes down the list, the things that go up and down. Curing a piece of meat, which goes back to using fire as the Greeks and Egyptians did going back 5,000 years ago, we used to do that type of curing and I still do. When I was a kid we did prosciutto. When you know how and do it properly there is nothing wrong with it. I’m not going to change my life for that and I think it is a disservice to put it in the same category as tobacco. That is really dangerous stuff.