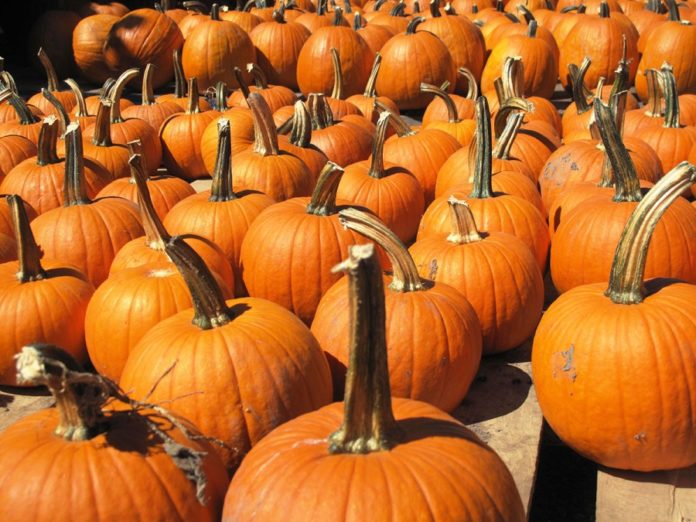 October is upon us and that means one very big quest needs to be undertaken: it’s time to go out and find your very own great pumpkin. Or in my case, something that borders on a trunk load. Really, who can just pick one? It is just as much fun for adults as it is for children to visit a farm’s pick-your-own pumpkin patch to mull over options. Native to North America, Americans have been enjoying this ribbed orange vegetable since we came together as natives and settlers.

A recipe for pumpkin pie appeared in the first cookbook written in the colonies and is still the most familiar use of this squash, but there are many more uses to explore. Hello, pumpkin latte! Instead of reaching for canned pumpkin puree for recipes, grab the pumpkin from your doorstep and roast it in the oven for your own velvety puree that can be folded with spices for pie and coffee drinks or used in soups and stews, salads and more.

The traditional pumpkins for jack o’ lanterns are the Connecticut Field variety. It is easy to imagine Ichabod Crane, the main character in, The Legend of Sleepy Hollow, being frightened by a headless horseman chasing him with one of these giant pumpkins where his head should be. Alas, this pumpkin’s flesh can be stringy and not the best for cooking but it is certainly useable. Roast the seeds for a snack while carving out your most frightful face. Season the seeds with chili powder, cumin, salt, or your favorite spice combo.

The moderately sized, round pumpkins most readily found at roadside stands are sugar pumpkins. Jersey girl Martha Stewart likes to peel them and steam large chunks before mashing for desserts. You may also cut one in half, deseed it and roast it on a sheet pan before scooping out the tender meat.

Long Island cheese pumpkins are squat, light in color and look very much like a wheel of cheese. This old fashioned variety is the go to for pies for many bakers.

The mini pumpkins you will find spilling out of bushel baskets at market are adorable as décor on the table and excellent when used as a vessel for soup or stuffed with a savory filling. Go on and grab a dozen.

Not all pumpkins are the iconic deep orange color that immediately springs to mind. Keep your eyes open for white, pink, yellow, red, blue and green varieties, too. The Moranga pink pumpkin variety from Brazil is well worth seeking out. The Brazilian restaurant Samba in Montclair fills them or the more readily available acorn squash with a sumptuous stew of shrimp and coconut milk. Owner Ilson Goncalvez is transported right back to his mother’s kitchen where he learned to make it.

In Thailand, the green varieties are prized and will often be found in curry dishes. Thai Garden in Metuchen is preparing it this season in a stir fry, a curry, and a sweet custard. The red Rouge Vif D’Etampes resembles Cinderella’s coach and will carry you away with its rich flavor. Blue and green varieties popular in Italy are wonderful when tucked inside ravioli.

While visiting Robson’s Farm at the Burlington County Farmers Market recently, I was totally smitten with the French heirloom variety, Galeux D’ Eysines, which appears to be covered with warts. Numerous shoppers referred to them as barnacles. This salmon-pink-colored squash may look a bit crusty on the outside but its flesh is creamy with a sweet taste. The French prefer it for soups.

Farmer Rose Robson began an annual tradition last year of growing Pumpkins with a Purpose and donating proceeds to charity. This year, a portion of the proceeds of all her pumpkins will be donated to the National Pancreatic Cancer Foundation in honor of Rose’s photography teacher, Richard Stromberg who was taken too soon by the disease. Robson’s Farm sells the pumpkins at the Westmont Farmers Market on Wednesdays 4 to 7 p.m. and Burlington County Farmers Market on Saturday mornings, 8:30 a.m. to 1 p.m.

A quick search on the Jersey Fresh website gives over 80 options for places to go pick and hundreds of farm stands and farmers markets to stock up on America’s favorite winter squash. Remember, pumpkins are not just for decorations. Get some hands on cooking tips at these pumpkin centric October events.