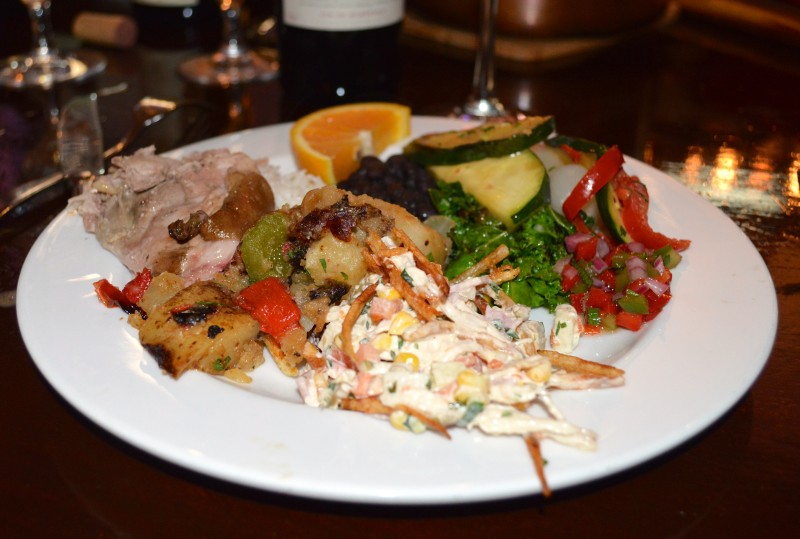 Disclosure: The food/beverages covered in this post were provided to Jersey Bites for free. As always, all views and opinions are the writer’s own.

You know it’s going to be an interesting—and unforgettable—dinner when you’re sitting at the table with the farmer who raised the pig that you’re about to eat. Yeah, this evening was one that will go down in the books, thanks to Chef Laercio Chamon, Jr. (aka Junior), the new owner and chef of Zoe Bistro in Little Silver. (It’s soon to be renamed, so if you’re great with words, feel free to lend a hand.

Junior’s love of cooking started at an early age when he was shucking oysters and clams at Doris and Ed’s in the Highlands at age 15. Working his way through the restaurant business, Junior learned from the best, cooking at Jamian’s Food and Drink, Dive Coastal Bar, Charley’s and the Orange Lawn, and Tennis Club in South Orange.

After learning from the best, he has become one of the best. Junior’s talent was on full display the evening I happened to join him for a Chef’s Table featuring a summer suckling pig roast straight from The Green Duchess Farm in Somerset (and yes, the Duchess herself was there to feast with us.) Along with 11 other hungry guests, I peered into the expansive windows into the kitchen, trying to get a glimpse of what dishes were coming out next.

Once those windows opened, it was an all-out family-style feast that brought the flavors of Junior’s Brazilian culture to a pasture-raised New Jersey pig. Served with Jersey corn bread with paprika and cilantro butter, Portuguese rolls, Brazilian black beans, potato hash, summer vegetables, sautéed kale and fresh oranges, and a bell pepper vinaigrette, it was one dish after another that brought the taste buds to attention.

My favorite dish? The Salpicao, a traditional Brazilian chicken salad that hit every texture—creamy and crunchy—and flavor—sweet and tart—in one unbelievable bowl. It was definitely a table favorite and we did our best to try and convince Junior to add it to the regular menu. (Fingers crossed!) As for the pièce de résistance—it was everything you would expect an organic, locally raised suckling pig would taste like in the hands of a talented chef. Unlike a lot of “pork dishes,” where the flavor of the sauce does its best to conceal the true pork flavor, Junior presented a pig that tasted just like pork. It was fatty, meaty, and perfectly cooked (not to mention the skin was on point in the crispy department). Brined for 24 hours then smoked for two and a half hours, it finally came together roasting in the oven in… duck fat for another two hours. With a recipe like that, you can bet the meat was full of flavor.

The meal was finished off with apple flan, served with French-pressed coffee from Fair Mountain Coffee Roasters, located in Atlantic Highlands. The owners, husband and wife team, Greg and Barbara, were also sitting at the table. Talk about pressure. But Junior came through on all fronts, as The Green Duchess and Greg and Barbara were nothing but smiles before, during, and after the meal.

“Chef’s Table is open to a food lover’s imagination,” says Agnes Chamon, Junior’s wife, who helps run the show over at Zoe Bistro. So if you’re reading this and you still haven’t visited Junior, get yourself in motion and head over to Zoe Bistro. The word is getting out and it’s only a matter of time before a seat at Chef Junior’s table is the hottest meal in town.