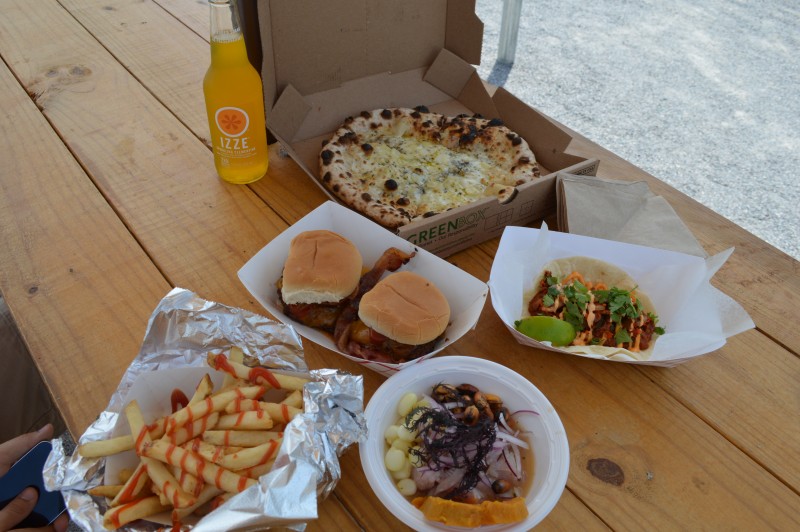 Asbury Park has gained its fair share of delectable delights over the past few years. From new options in fine dining to countless takes on what good pizza actually tastes like, if you’re looking for a good meal, chances are you can find one in Asbury Park. So when North Eats debuted on the boardwalk this summer I was pretty excited to see what else would be thrown into the culinary mix.

Settled on the north end of the Asbury Park boardwalk, just past Convention Hall is North Eats. (It’s steps away from great surfing and the after hours dog beach.) Six food trucks are parked there for your eating pleasure, seven days a week from 11 a.m. to 9 p.m. Under the canopy of bulb lights, this little food oasis has it all: Peruvian cuisine, organic pizza, pork roll sandwiches, sliders, ice cream and of course Korean tacos. I stopped by on a recent (hot) afternoon, ready to dig in, however my eyes were definitely bigger than my stomach. (A second visit is in order).

With my eating partner in tow, we divided and conquered. Deciding on a Bianca pizza from Neapolitan Express, a pork taco—Asian style—with spicy sriracha and kimchi made by Chef Andrew Mazza and Josh Scala from Seoul Fusion; Bourbon BBQ sliders (with fries, of course) from The Outslider, and a classic cebiche from RUNA Peruvian Cuisine.

After collecting all of our foodie goodies, we sat down at one of the picnic tables (after a game of cornhole) and were in awe at the range of dishes that we had just acquired—within feet of one another. It was like traveling to Korea, Peru, Italy, and, final destination—the Southern U.S. The two sliders were delicious—just cooked with a sweet BBQ sauce. The cebiche was amazingly refreshing, especially on a hot summer day. (We were sweating even though we were sitting under an umbrella). Chef Marita Lynn did an amazing job bringing the dishes that her customers love at her Red Bank restaurant of the same name, to the beach goers of Asbury Park. Onto the pizza, which Neapolitan Express touts as being the first organic and GMO-free pizza truck serving authentic Neapolitan pizza: three things I’m very into.

Made with “OO” flour and Ciao San Marzano tomatoes (well, not pie, because I went with the Bianca), the pizza tastes as good as it is for the environment. It’s actually the first eco-friendly food truck that’s powered by clean energy fuels. But really, who cares about all of that because it’s really the pizza we’re after and it’s stellar (especially coming from a food truck).

My favorite was the pork taco. It was incredibly flavorful and really hit the spot when it comes to taste and spice in my book. I’m looking forward to going back and trying out some more of their dishes including Bulgogi Bites that’s reminiscent of a Korean, meat-filled zeppole (sounds unusual, but you know you want a bite of it too).

Rounding out the food truck set (and on my to-try list for next time) is the Igloo Italian Ice & Ice Cream where owner David Hirschel, who owns a storefront in Oakhurst, brings ice cream up a notch (or ten) with his flavorful creations of homemade ice cream pops. Then there’s Johnny’s Pork Roll and Coffee Truck where pork roll aficionados can take a bite into New Jersey’s favorite meat anytime of day.