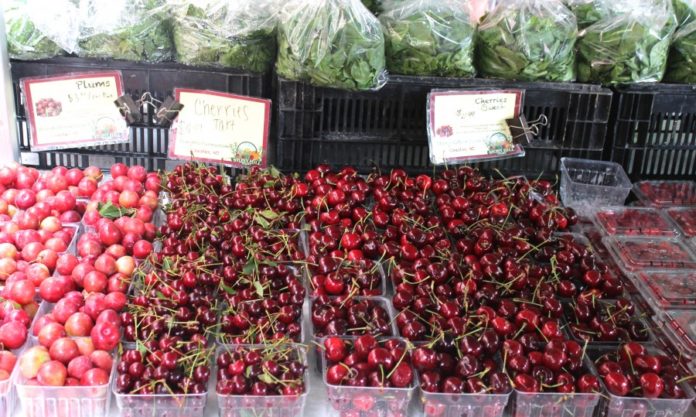 Hoboken is a fantastic city. It has a small-town feel with easy, fast access to one of the biggest cities in the world. We have a lot right at our fingertips. But what we could use a little more of is all that green stuff—you know grass, trees, plants—simply put, a little more nature would be great. Luckily, we have access to the bounty of produce that has earned New Jersey the title of Garden State with Hoboken’s Farmers Markets.

On Tuesdays, Thursdays, and Saturdays, produce, fresh meats, eggs, and the occasional baked goods are trucked into town. Starting at the end of June and running through October, residents of the square mile can get their fill of tomatoes, corn, berries and beets, salad greens of all sorts, carrots in a rainbow of colors and the list goes on. The prices are usually very fair and you can often find organic options as well. Here is a little more information about each of the three locations and farmers market schedule for Hoboken. Downtown Market
When: Tuesdays, 3 p.m. to 7:30 p.m., June 26 through end of October
Where: Washington Street at Newark Street

Uptown Market
When: Thursdays, 2 p.m. to 7 p.m., June 26 through end of October
Where: Hudson Street at 13th Street

Putting it All to Good Use Wondering what to do with all of those fresh veggies, fruits and meats? Me, too! As part of my farmers market tour, I attended a cooking class in town: the Garden Street Farmer’s Market Tour and cooking class, hosted by Hudson Table, a new culinary studio in uptown Hoboken. As part of the class we took a walk to the Saturday market to select our favorite seasonal ingredients. We prepared a feast with our zucchini, onion, squash, tomatoes, peaches, peppers, and berries.

All of the dishes were surprisingly easy to make. I consider myself a pretty good home chef, but a gentleman with whom we shared our prep table didn’t seem to know the first thing about cooking. He was able to jump in there like the rest of us, chopping, mixing and zesting to our final product. We learned some great tips—like how to cut corn kernels off the cob without making a huge mess.

I’m always drawn to the beautiful, colorful rows of produce, but sometimes struggle with how to really make a meal of them. Now, for seasons to come, I’ll have the great recipes shared by the Hudson Table team.

Below is one of the dishes we prepared and enjoyed together at the end of class. We used a mix of peppers and tomatoes because we couldn’t choose a favorite.