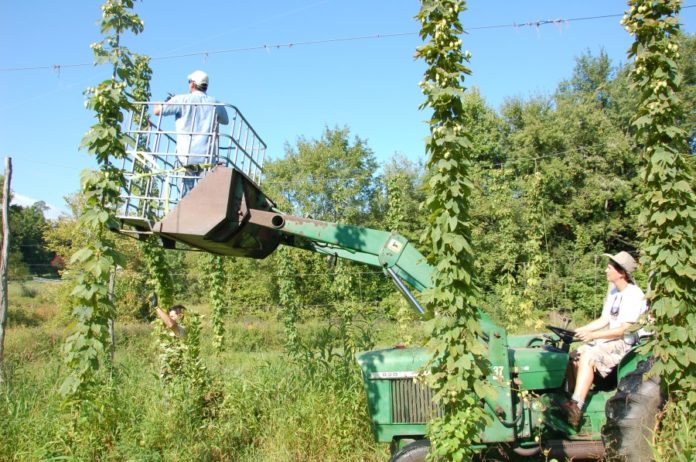 Look out tomatoes, Humulus Lupulus bines could be winding their way through the Garden State soon!

Brewing beer is a lot like cooking. With that in mind, think of hops as the primary — and most versatile — spice that brewers use to season their “dish.”

While New Jersey was slow to pick up on the craft beer craze, momentum is building. According to NJ Craft Beer, there are 31 breweries in the state now with another 19 in the works. These small breweries provide fresh, locally made beer and as any beer geek will tell you, there is just about nothing better (The exception being beer that’s made with locally sourced ingredients.) Too bad the great Garden State doesn’t produce hops, right?

Except that they do. The Keystone Development Center surveyed eight commercial hop farmers in New Jersey as part of a study that is a first step towards a possible Cooperative project. I spoke to Peggy Fogarty who is an executive director there and she explained that the center supports agriculture in New Jersey, Delaware, Maryland, and Pennsylvania. Fogarty’s expertise is in the area of cooperatives. These legal entities, also known as co-ops, are a space within which small farmers or other food cultivators band together to share production, profits, equipment, distribution, and marketing budgets. (Fogarty was part of the Heritage Shellfish Cooperative reported on by Cindy Dudas of Jersey Bites in June.)

In terms of the possibility of a New Jersey Hop Growers Cooperative, Fogarty says she thinks “It’s going to be something.” While nothing concrete exists yet, the idea is picking up steam. This past spring, the Northeast Sustainable Agriculture Research and Education Program, a regional program under the USDA National Institute of Food and Agriculture (NIFA), awarded a grant to James Simon of the Rutgers University Department of Plant Biology & Pathology for the “establishment and marketing of hops production in the mid-Atlantic.”

Rutgers team member Robert Pyne explains, “For our part, Rutgers is hoping to help facilitate growth of the hop industry in New Jersey and Pennsylvania through the investigation of best horticultural practices and distributing that information as efficiently as possible. As an additional service to growers, we will be providing chemical analysis of their hops, which is necessary in order to offer a salable product.”

A key point in Pyne’s statement is the one regarding chemical analysis. The alpha acids and essential oils in hops are responsible for the bitterness and aroma, respectively, that a particular hop produces. In order to brew a consistent product, brewers need to know those numbers. Chemical analysis is part of the solution to the problem of New Jersey hop production transitioning from being considered a novelty to becoming a bonafide staple.

No one knows that better than Beau Byrtus of Oast House Hop Farm. He’s participating in the Rutgers project and runs the largest hop farm in the state. It takes three seasons for a hop bine to reach full production and Oast House is now in its fourth. Byrtus has supplied hops to local brewers including Kane Brewing in Ocean Township and Triumph Brewing Company in Princeton (and New Hope, PA), for one-off seasonal beers. That’s great but his hops can’t be part of a year-round flagship beer if the levels of alpha acids and essential oils aren’t known within a tight tolerance.

That’s not all. While hops yield an extremely high dollar value per acre—ideal for New Jersey and its smaller farms—Byrtus still can’t afford the $100,000 or more investment he would need for drying, harvesting, and pelletizing machinery that west coast hop farms use to process and preserve their crop. This equipment enables west coast farms to distribute across the country, and without it, Oast House can’t even distribute across the state. That means he has to harvest by hand and the hops need to get to a brew kettle almost immediately. That seriously limits potential growth.

Still, Byrtus has unbridled enthusiasm for what he believes is the start of a beautiful friendship. Despite the obstacles, he still sells out his entire crop before it’s harvested. A couple of regional co-ops with shared equipment and marketing dollars could go a long way toward taking New Jersey hop farms from quaint-cottage-business status to being real players in the industry.

In the immediate future, though, the hop harvest quickly approaches. Friends and family will gather at Oast House for an event that combines hard work, a barbeque and maybe a beer tasting. Meanwhile, the folks at Rutgers and the Keystone Development Center will be hard at work, too.