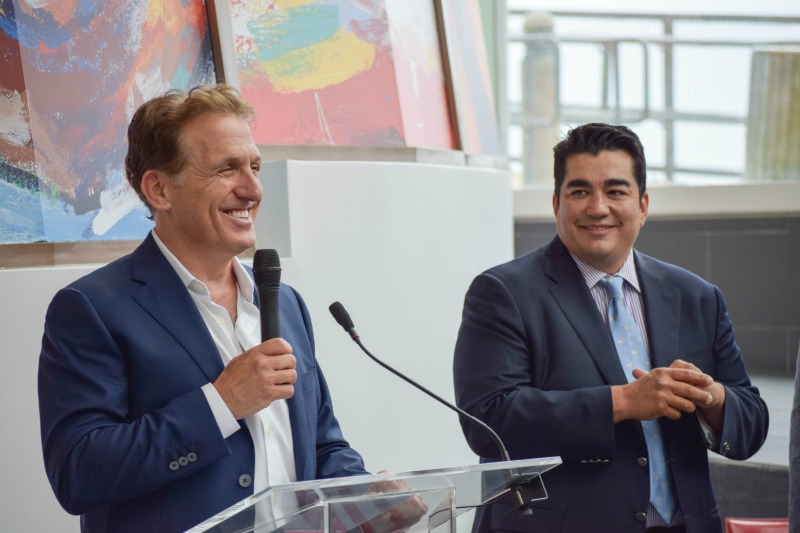 Chef Jose Garces is returning to Atlantic City this summer for another shot in the restaurant business, this time at The Playground. The Iron Chef winner and successful restaurateur has teamed up with developer Bart Blatstein (pictured above, on left) to create what Blatstein describes as “an entertainment and culinary experience, the likes of which you have never seen.” It is the result of a $50 million renovation of the former Pier Shops at Caesar’s. Phase one will debut on June 26, with T Street, a dining, shopping and entertainment venue reminiscent of Music Row in Nashville, and Beale Street in Memphis. Each of T Street’s seven themed venues will offer live music and signature dining, as well as drink options crafted by Garces.

T Street will also include the Monkey Bar, a high-tech hangout with beautiful ocean views. 39 North (a reference to its location on the 39th Parallel), which Blatstein says will be “the coolest space anywhere in the United States,” will feature a state-of-the-art stage for live acts, a huge HD screen, and enough space for more than 2,000 guests.

Garces is no stranger to the Atlantic City dining scene; he had several restaurants at the now-closed Revel Casino (Amada, Village Whiskey, and Distrito Cantina). At a press conference supporting The Playground, Garces said he is “looking forward to providing great food, and being a part of something great that will change the dynamic in Atlantic City.” The chef was short on details, although he acknowledged that the menus will cover all price points, from casual to fine dining.

Atlantic City Mayor Don Guardian hinted, “he’s told me all sorts of stuff that I can’t tell you…It kills me!” Garces’s seven Philly restaurants may offer a clue to the diversity of offerings that diners will be enjoying: ranging from modern Mexican street food at Distrito, to burgers, duck fat fries and whiskey pairings at Village Whiskey, snapper turtle soup at The Olde Bar, and European bistro fare at Garces Trading Company.

Since opening his first restaurant, Amada, in 2005, Garces now operates more than a dozen eateries, including Distrito in Moorestown, as well as locations in Philadelphia, Scottsdale, Chicago, Palm Springs, and Washington, D.C.  He is the 2009 winner of the James Beard Foundation’s Best Chef, Mid-Atlantic award.

Photos:
Garces, at top, courtesy of the Garces Group.
Garces with Blatstein and The Playground site both taken by Matt Wozniak.