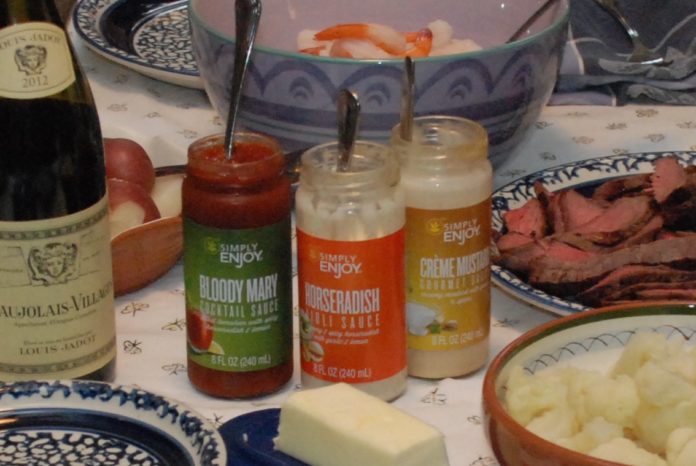 Sampling three new Stop & Shop products was a welcome task. Not only do I shop at two of the store’s locations regularly, I’m always on the lookout for something new to make for dinner. It’s not that I lack imagination. I’m just too often short on time or preparing dinner at the last minute. Also, although I can be pretty picky about pre-made or packaged food, I have had good luck with the company’s own brands, including Simply Enjoy. Each sauce proved to have a fresh and pleasing taste. I began by trying the mustard sauce with oven-baked cod and salmon. Here’s what I came up with:

Next on the agenda: dinner for four on a work night. What would I serve my house guests? Good eaters that they are, I suspected they would be in the mood for a big meal after driving back from Florida. Based on how eagerly they scoffed down the food, I believe that I succeeded in giving them the dinner they must have craved.

I served the three sauces chilled with dishes that were mostly unseasoned. Cold shrimp, boiled potatoes, steamed cauliflower and medium-rare London broil were well complemented by the sauces in various applications.

After that, I guess you would say I was on a roll, although I only used whole wheat bread (forgive the pun). The mustard sauce spruced up my usual ham and cheese quite nicely, while the cocktail sauce was a particularly good substitution for ketchup on a scrambled egg sandwich for lunch.

Thanks, Stop & Shop, for providing the ingredients and inspiration for some lovely meals.

Kathy Mathieu is the owner and creator of Food Sharing Network, an inclusive blog about all things food. She started the site after she realized that almost all conversations turned to food. In a conservative estimate, she lays claim to having made more than 14,000 dinners. Mathieu also is the owner-operator of The Red Wagon Group, a NJ-based firm specializing in traditional and new media.