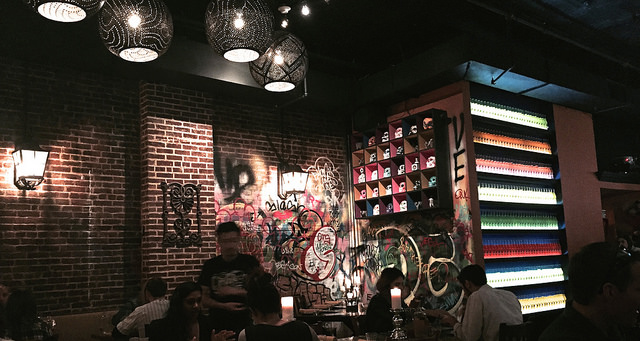 I was recently invited to visit Orale and quite happy about it, as I had driven by many times always saying “I really need to try their food!” As an early Cinco de Mayo celebration, my fiancé Nick and I finally made the trip to Jersey City to see if Orale really lived up to the hype.

As I walked through the open storefront, my first thought was, this place has real personality – in a good way. With spray-painted walls, a glowing display of fluorescent bottles, and ornate metal lanterns, it’s an eclectic mix of ’80s grunge and rustic charm.

First let me say, Orale has a regular dinner menu and a completely separate menu for guacamole. That can only mean one thing – Orale is serious about its guac. For guacamole traditionalists, the thick, freshly made dip is some of the best I’ve had. For more adventurous group, they have a tasting menu of toppings. We did a tasting of three: guacamole topped with crispy pork belly, gaujillo shrimp and Serrano marmalade. Choosing a favorite was tough, but the gooey, flavorful mix of Serrano, agave, and lime took an already fantastic starter and made it…well, I think I ate most of it myself. So much for sharing! We also enjoyed the ceviche perucho. It was everything ceviche should be – bright, tart, fresh, flavorful – and with a kick of spice

For our main meal we chose to stick with the tacos. Opting for the Pollo and the Carne versions, we were afraid our eyes were bigger than our stomachs as our main courses arrived. If that wasn’t enough, I threw in an order of fried, sweet plantains last minute, because who doesn’t have room for plantains? The tacos were simply excellent. The flavors blended seamlessly, yet the distinctiveness of each ingredient didn’t get lost. There was love put in to this food and that much was obvious.

Also pretty obvious was the popularity of this Mexican street-eats spot. On a Wednesday in late April, the bar was packed, tables were full, and near the end of our dinner there were a few hungry patrons waiting to sit.

While their tequila list is quite extensive, I’m not a fan of this spirit, so I can’t personally speak to it. I can say, however, that just like the separate guacamole menu, the tequila list is one of the most impressive I’ve seen. What I did enjoy was the great wine list. There were not only affordable selections, but each wine was offered by the glass, carafe (about 2.5 glasses) and large carafe (bottle). This kind of flexibility in the wine list is something I’ve sought for a while. I almost always find myself caught deciding between a few glasses or choosing the bottle I know I can’t finish alone. The carafe was the perfect compromise and I hope to see a lot more of this on other wine menus.