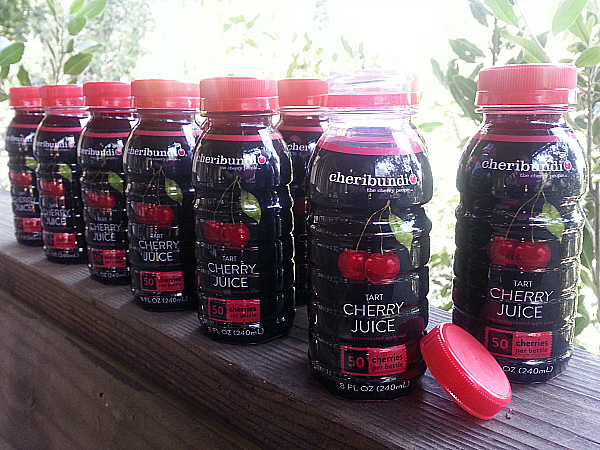 Uncle Ray was a hard-drinking WWII Navy veteran who, unsurprisingly, developed gout. There was always a bowl of cherries on his kitchen table, which he swore served as his insurance policy against getting more than a hangover after a night of one too many.

The funny thing is, he may have been right.

My uncle was, most likely, eating sweet cherries that are commonly found in the grocery store. While sweet cherries contain the same health benefits as their tart cousins, they are far less potent. The tart version contains a much higher level of anthocyanins which are antioxidant, anti-inflammatory and all around good stuff.

Full disclosure: Cheribundi sent us samples of their tart cherry juice and suggested we take their seven-day challenge. Simply put, you drink one eight-ounce bottle of juice each day for seven days and see how you feel.  Remembering my uncle, I volunteered.

Life Extension magazine published an article in 2013 outlining the benefits of tart cherry juice. They cite a number of studies and go into scientific detail, but the gist is this:

Tart cherries are anti-inflammatory and reduce pain, redness and swelling from muscle damage much like ibuprofen but without the side effects.

Also, cmpounds in tart cherries reduce the risk of osteoarthritis, cardiovascular disease, cancer, metabolic syndrome and neurodegenerative disease. The cherries also contain melatonin which can ease insomnia, especially in older people.I can’t honestly tell anyone that cherry juice is going to ward off Alzheimer’s, gout, high cholesterol, or cancer. And I don’t know that it will help you sleep like a baby. I’m not a scientist. However, I can tell you about two things I noticed.

First, I’m a light sleeper. I wake up at least once a night. Tart cherry juice didn’t change that, but I certainly felt better-rested in the morning. I learned later that’s consistent with test subjects. The theory is that while you may still awaken during the night, you will fall back to sleep faster, resulting in a better night’s sleep.

Second, like most folks these days, I have a desk job and weekday exercise is hit-or-miss for me. On weekends though, I have a three-mile exercise route that I do on Saturday and Sunday mornings coupled with yard work and other physical activity. It takes a toll on my muscles and joints. I also have a 2 ½  hour drive to work on Monday morning. I would imagine that it’s comical to see me and my stiffened muscles gimp the expansive parking lot to my office building. On the Monday of the challenge though, I looked more human and less ape. It seemed like my muscles recovered much more quickly and the pain was noticeably reduced.

On a final note, Cheribundi actually tastes pretty good. It’s a little earthy and the pucker factor should not be underestimated. Unless your tart threshold is really high, it’s tough to drink straight. I cut mine with water and had half in the morning and half at night.

So, right or wrong, I’ll raise a glass to old Uncle Ray. What’s in that glass, well, that’s up to you.