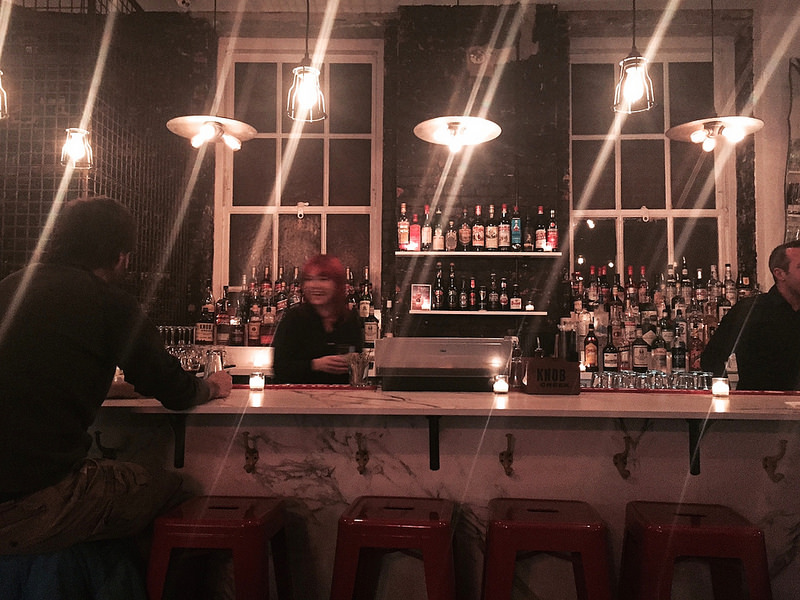 The Jersey City dining scene has been on an upswing for years now. And its climb continues with the addition of Carrino Provisions. The masterminds behind this Italian Osteria and Market—The Three Kings of Kings County (Chef Talde and proprietors David Massoni and John Bush)—are the same that opened Talde, Pork Slope and Thistle Hill Tavern in Brooklyn. Together with HGTV’s Kitchen Cousins—Anthony Carrino and John Colaneri—the team of proprietors, chefs, and craftsmen opened their doors in late January 2015.

Just days after opening, my fiancé, Nick, and I received a welcomed invitation to check out Jersey City’s newest fooderie. Just off of busy Newark Street, Carrrino Provisions resides in what was formerly a police headquarters and before that, the telephone switchboard transmitting calls between New Jersey and New York. Before dinner, Massoni walks us around the space, sharing renovation stories, pointing out reclaimed items from the former industrial space and filling us in on what’s coming next. He shows us the private dining space, just downstairs from the osteria, and a secret door, to which Massoni points and says, “Something is happening in there, but that’s all I can tell you.” Nick and I both take a sip of our prosecco—because what better way to tour a brand new restaurant than with a glass of prosecco—and give each other the eye. What could they be hiding in that space? We hope to find out in the spring.

Preceding the osteria is a long, brightly lit marketplace that’s in the order of an Italian meal: antipasti, meats, cheeses, fresh pastas, meats, and finally dessert. Home chefs can pick up many of the items being served at the osteria to create feasts of their own. There’s also an appropriately appointed coffee bar near the front of the store, great for enjoying a post-meal espresso or a caffeine pick-me-up on the way to the Grove Street Path.

After a short tour—and a sneak peek at the restaurant group’s other venture, Talde Jersey City (which opened its doors in early February)—we got seated, ordered some wine and started reviewing the menu. The menu is small, but carefully curated by Chef Talde. He designed the plates to be shared, with an extensive mix of antipasti plates. There are also handmade pastas and a short list of entrees, which we’re told will always be brief: one chicken, one meat, one fish.

The antipasti section catches our eyes immediately and we agree sharing really is the best way to enjoy the menu. We order several meats and cheeses, adding an ancillary fresh ricotta cheese, which rivals some of the best I’ve ever had. Wedding diet? Whatever. Pass the cheese, please. We also ordered one of their fresh pastas. Neither of us are big on pasta, but this is no ordinary pasta. It was al dente and gone just as quickly as it arrived. The service was exceptional as well. Our server made an already rave-worthy meal even better.

As we left I remarked to Nick, “This is just what Jersey City needs.” It’s elevating the dining scene. Its sophisticated bar, industrial décor, curated menu, and high-quality market take the “up-and-coming” dining landscape of Jersey City to “almost-arrived.” Welcome Carrino Provisions. I hope to see a lot of you there, especially in the outdoor courtyard for a black and white movie night: Casablanca, a glass of Nero D’Avola and an Italian meat and cheese board—it’s my kind of night and, if you’re into that sort of thing, too, I encourage you to make a visit.

Karin Nastawa grew up in the great Garden State, leaving only briefly to attend college in Philadelphia, where she developed a love for all things cheesesteaks. She has lived in Hoboken for over nine years, taking in the incredible dining scenes on both sides of the river and has a particular affinity for staking out interesting BYO establishments in Hudson County. She is the founder and owner of VinEatsi, a boutique wine & food digital marketing agency and has also studied wine and spirits extensively, receiving her advanced degree from the Wine & Spirits Education Trust (WSET). Along with running VinEatsi, she is an avid cook and food enthusiast and writes about her wine & food adventures in the VinEatsi blog. She dreams of having a chef’s kitchen and a state-of-the-art wine cellar filled with Sonoma Coast Pinot Noir and Left Bank Bordeaux… someday.