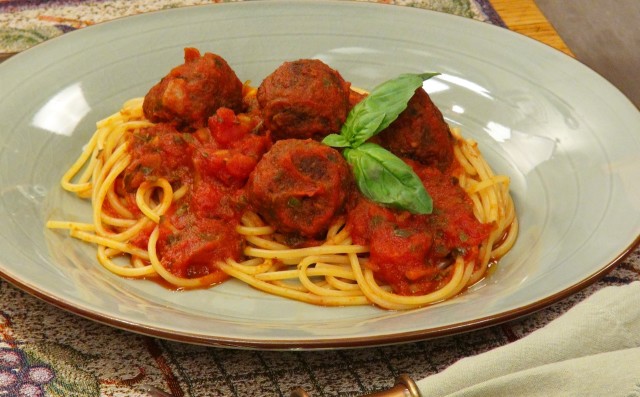 When you think of jazz, does vegetarian cooking come to mind? Well, to New Jersey native—and current resident—Laura Theodore, the idea of two totally different concepts never sounded so great together. Theodore stars on Jazzy Vegetarian, which can be found on the Create network. Every Tuesday and Friday, viewers can catch Theodore as she cooks vegan dishes that will delight every palate, including those of omnivores!

More than 30 years ago, during a time when the word “vegetarian” was not an “it” word, Theodore gave up red meat. A few years later, she gave up chicken, and a few years after that, dairy, which put her into the vegan category. Now, she has been a vegan for the past seven years and has never felt better.

Theodore’s passion for cooking began at a young age when she would cook with her grandmother and mother in the kitchen. When she decided to go vegan, she realized that many of her family favorites were not going to fit the criteria of her new diet, at least in their traditional form. What began as a necessity turned into a career.

“When changing from omnivore to a plant-based diet, people really miss the flavors, tastes, and textures,” says Theodore, who focuses on recreating traditional recipes by starting with the ingredients that the dishes have in common and then substituting vegan-friendly ingredients that work just as well as their counterparts.

For example, when transforming meatballs into “wheatballs,” Theodore focused on the common ingredients: breadcrumbs and Italian spices. Then she thought about recreating that meaty texture: ground up walnuts (who knew!). After that, what would take place of a whipped egg? Pureed mushrooms and onions. These same “wheatballs” wowed Theodore’s omnivore dinner guests as well as the hosts of the popular daytime television show, The Talk.

“When you start with the same building blocks, it’ll help recreate all of the elements that you’re looking for when eating a meal,” she says. Also a professional singer, Theodore compares recipe creation to jazz singing: “You have to listen to the chords and see what’s missing, what will make the song whole.”

Theodore’s food philosophy came in handy in 2004, when she wrote the theme song to Jazzy Vegetarian and began filming her first season. She has been lucky enough to feature expert celebrity guests on her show including actor, director, and environmentalist Ed Begley, Jr., nutritional expert Dr. Pam Popper, and author of the bestselling book The China Study, T. Colin Campbell, Ph.D.

Season four featured twists on classic American meals and a visit from Chef Del Sroufe, the bestselling New York Times author of Forks Over Knives. Theodore is currently preparing for her fifth season, focusing on quick and easy meals that are extremely accessible.

“My goal is that 98% of the ingredients for my recipes can be found at the local supermarket,” says Theodore. “If your interests include being healthy and making compassionate choices, then Jazzy Vegetarian is a great choice. It’s fun, zany, musical, and entertaining no matter who you are!”

If a hit television show isn’t enough, Theodore also has a weekly podcast and two cookbooks, with a third debuting in late 2015.

“Anybody can easily start with one [vegan] meal a week,” Theodore notes. She’s even making it easy for Jersey Bites readers by sharing two of her most popular recipes that vegans and omnivores alike will love: Spaghetti and Wheatballs and Mushroom-Nut Burgers, both below.

Be sure to catch more of this New Jersey cook as she sings and cooks her way through the Jazzy Vegetarian kitchen! “Easy enough to make for a special weeknight meal, but fancy enough to serve when hosting a casual dinner party, this dish will become a staple in your house.” —Laura Theodore

Put the walnuts in a blender, and pulse to process into coarse crumbs.

Add the walnuts to the bread crumbs and stir gently to incorporate.

Put the mushrooms and onion in a blender, and process to a chunky purée. Add the mushroom mixture to the walnut–breadcrumb mixture and stir to incorporate. Spoon out about 1½ tablespoons of the mushroom mixture and roll it into a ball. Gently squeeze it together, to make sure it is compact and will hold together while baking. Continue in this way with the remaining mushroom mixture. Arrange the wheatballs on the lined baking pan. Bake for 25 to 30 minutes. Gently rotate each wheatball and bake for 12 to 20 minutes more, or until they are firm, crisp and golden.

Bring a large pot of salted water to a boil. Add the spaghetti and cook, stirring occasionally, until tender but firm. Drain the spaghetti well.

Meanwhile, pour the marinara sauce in a medium sauce pan. Bring the sauce to a simmer over medium-low heat. Gently add the wheatballs to the sauce, one at a time, cover, and simmer for 7 to 10 minutes.

To serve, put one-quarter of the spaghetti into each of four pasta bowls, and top with three or four wheatballs per bowl. Ladle marinara sauce over the top and serve immediately.

Chef’s Note
To make fresh bread crumbs, put 3 to 4 slices of whole-grain bread in a blender and process into coarse crumbs. Gluten-free option: You may use your favorite gluten-free pasta in this recipe. The wheatballs make a sensational base for a terrific hero-style sandwich, too!

For years I tried and tried to come up with an easy way to make a great-tasting burger substitute. When paired with a whole-grain bun, this burger has a hearty texture and robust taste that stands in magnificently for the meat-based version.

Directions:
Preheat the oven to 375° F. Line a medium baking pan with unbleached parchment paper. Put the bread crumbs, Italian or all-purpose seasoning, chili powder, garlic powder, and salt in a large bowl. Put the walnuts in a blender and process in pulses until they resemble coarsely ground flour. Add the walnuts to the bread crumbs and stir gently to incorporate. Put the mushrooms, onion, and tamari in a blender and process to a chunky purée. Add the mushroom mixture to the walnut–bread crumb mixture and stir to incorporate.

Place a three-inch cookie cutter ring on the parchment. Pack 1/4 of the mushroom-bread crumb mixture into the ring and press it firmly and evenly into the ring to form a patty. Gently remove the ring. Repeat with the remaining mushroom-bread crumb mixture. Flatten each burger slightly with the back of a flat spatula. Bake for 18 minutes. Flip each burger and bake for an additional 15 to 25 minutes, or until the burgers are slightly crisp and golden.