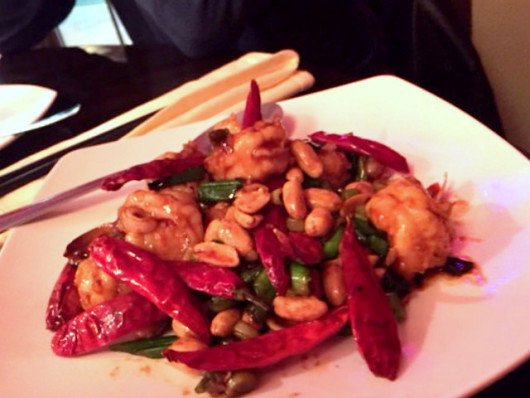 Since New Jersey is home to a plethora of shopping centers, it’s no surprise that some of our best restaurants are tucked away in strip malls. We recently enjoyed a delightful meal at one such location when we dined at Chulicious in Mount Laurel.

The woman at the restaurant’s helm is Sherry Chu, a very personable graduate of nearby Lenape High School and Penn State’s hospitality management program. She’s off to a wonderful start with her restaurant and has already received a stellar review from Craig LeBan of the Philadelphia Inquirer. Sherry takes obvious pride in the quality of the food at Chulicious. She stopped at our table and explained that a number of the sauces are cooked down for a number of hours to help with the intensity and complexity of the flavors. Our hungry group was raring to dive into a variety of menu options based on Sherry’s recommendations.

The three couples in our group started with the crystal wontons as an appetizer. They were light and airy, with a veggie and meat filling and a dense, delectable sauce. They had a hint of chili sauce that gave the dish a little bit of heat without being overpowering. The Chulicious wonton soup was also a winner.

With our palates primed by the great starters, we jumped right into our entrees. We decided on a mix of fish, beef, and fowl: sea bass with ginger and scallion, princess shrimp, garlic shrimp, wu-shi ribs, and salt-baked chicken. The salt-baked chicken had a flavorful crust of salt and a variety of spices, as well as a crisp texture. As with the other entrees, the secret was definitely in the sauce, as Sherry had promised. Each of the seafood dishes glistened, and each sauce had its own special personality. The ribs were meaty and fall-off-the-bone tender. While we all shared a taste of our dishes, I suspect that we were all tempted to do a little table snitching as we fell in love with one dish after another.

This is a restaurant where care and attention to detail have resulted in a terrific addition to the Burlington County dining scene. While we were almost too full for dessert, we had to leave a little bit of room to share some cake. Although Chulicious did not have any cake on hand that night, when Sherry heard that we were celebrating my birthday, she ran out and got us a generous slab to share. It was a thoughtful gesture, and a nice ending to an evening of great food with great friends.

Beth Christian subsisted primarily on cheeseburgers and liverwurst sandwiches during childhood and refused to try most new foods.  Her culinary horizons were expanded during her college days in Schenectady, New York, where she learned the joys of trying slow-simmered Italian dishes, Szechuan cuisine, and everything in between. When not engaged in the practice of law in Monmouth County, Beth is busy scouting out interesting restaurants, farmer’s markets and food purveyors near her home in Burlington County. Beth’s primary dining sidekick is her husband John, but she also enjoys having her daughter Meghan, son Michael and her wonderful friends come along for the ride. Email Beth at BChristian@JerseyBites.com.