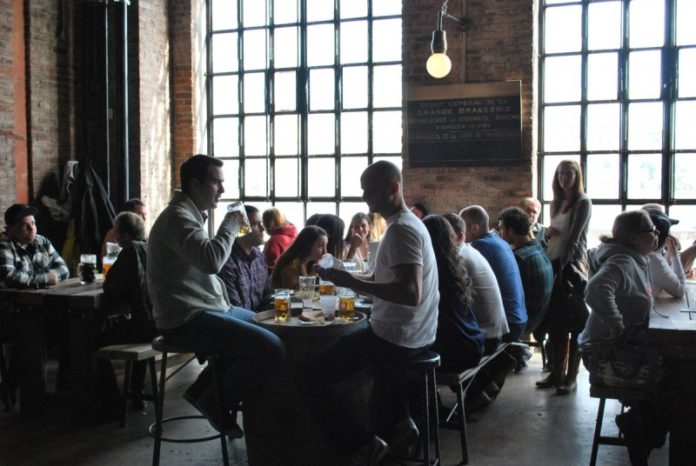 Yesterday, we were among the lucky ones to walk right in to Asbury Festhalle and Biergarten without what’s become known as the infamous outside wait. By the time we left at 3 p.m., the wait had begun. There is nothing like this restaurant anywhere in the area. The atmosphere is what really makes Festhalle unique: think traditional German beer hall with an industrial vibe. I don’t know who did the sourcing for the stools, tables, and decor, but they did one impressive job. Not one stool is alike. The patrons were playing “who’s got the most beaten-up-looking seat?” Long communal tables fill most of the space, with small high-tops, barrels serving as tables, and long standing bars offering a more intimate dining and drinking experience. Peter and I scored a spot to rest our beers on the top of a makeshift firewood stand that was working overtime as a tabletop. As you would expect from a German themed restaurant, beer takes center stage at the bar.  If imports are your thing, Festhalle has a thoughtful and  extensive draft list that runs the gamut from Kolsch to Doppelbock.  They haven’t forgotten about American Craft either.  It was particularly nice to see New Jersey favorites Carton, Kane and Ramstein represented on the chalk board.  The bottle list digs a little deeper with Lambics and Trappist styles making their appearance so even the most discerning beer geek with find something interesting. e is the kind of place I call a “friend maker.” You just can’t hang out at Festhalle and not talk to the people next to you. We met a fun couple from Jersey City while we were there (Hi, Courtney and Matt!) and a very nice couple who allowed us to take pictures of their food. Deborah Smith, Executive Editor Launched in 2007, JerseyBites.com began as a home for Deborah’s growing collection of recipes, but soon grew into a hub for food news in the Garden State. In addition to her duties on JerseyBites, Deborah is the owner of Foxtrot Media, a full service digital marketing company that specializes in content development, social media marketing and search engine optimization.  She is also a highly sought after speaker on the topic of restaurant marketing, social media and blogging. You can learn more about her services and marketing through social media on her blog www.DeborahLSmith.com.