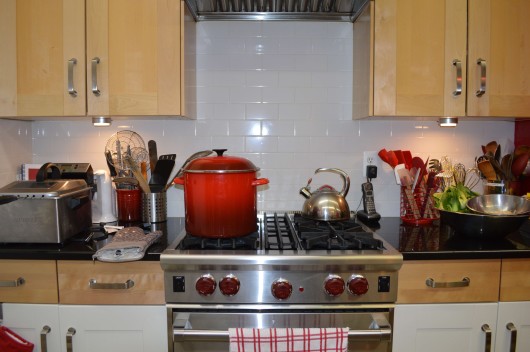 Tucked away off of River Road in Fair Haven is Taste & Technique Cooking Studio, a culinary community gem that has been bringing locals an education in cooking, in an intimate and welcoming setting for the past seven years. Whether you’ve never picked up a knife before or you’ve explored hundreds of cookbooks in your own kitchen, you’ll learn something new, taste something delicious, and meet some great people during a visit to Taste & Technique. Carolyn Rue opened up Taste & Technique with a partner seven years ago. She’s been running the studio on her own for the past four years, all with the goal of helping home cooks expand their repertoires and palates. The studio is small, with a maximum attendance of 15 people and no second row. (Rue describes her own second-row experiences at other schools as having been less-than-positive.)

Now she’s basking in her small space, using it as an opportunity for attendees to learn exactly how things are made. They can’t be shy about asking questions, especially since everyone is within a few feet of the chef. Not only does Rue hold partial hands-on cooking classes, she also holds cooking demonstrations for those who are less interested in playing with their food and more interested in eating their food, with well known local chefs including Chef Drew Araneo from Drew’s Bayshore Bistro, Chef Casey Pecse of d’jeet?, and Via 45’s chefs and owners Claudette Herring and Lauren Phillips. In addition, Rue hosts private parties for children and adults. She also rents out the studio to local food purveyors who need a commercial kitchen to complete their own preparations. Talk about multi-functional!

On a recent, cold Friday evening, I had the opportunity to attend one of Taste & Technique’s cooking classes with chef Rachel Weston, a former writer for The Star Ledger and a teacher. Weston was cooking up a lunar new year feast featuring food that celebrates the Chinese new year, like crispy whole fish and longevity noodles. Despite attending alone, I quickly made friends with the couple sitting next to me and soon after everyone was talking. After speaking with Rue briefly about what goals she had for her cooking studio, I wasn’t sure that her rosy view would pan out, however it really does. The studio itself is extremely welcoming; add in a group of participants, however willing they are to get their hands dirty, and it’s like you’ve met new members of your culinary family.

Chef Weston kicked off the night with some delicious appetizers before sending us off to work preparing the main meal. First up on the menu: scallion pancakes. Throughout the night, Chef Weston and Rue provided not only the how, but the why, which helped me remember many if the techniques they employed. They also shared where everyone could purchase the ingredients—locally!

Next up was an appetizer of drunken clams, whose broth was extremely tasty—so tasty in fact that some attendees drank it long after the clams were eaten. Bonus: I learned that using cornmeal in cold water to clean the clams encourages them to open up and spit out any grit in the shell. While we enjoyed our appetizers, Chef showed us how to make the coconut rice pudding brulée with kumquat coins, which simmered on the stove and then was put into the refrigerator for safe keeping until the end of the class.

Once our bellies were satisfied (for the moment), we were put to work making longevity noodles and vegetables, shiro miso shrimp and mushrooms in lettuce cups, and Asian dumplings with pork and chive and vegetarian fillings. The room broke into three groups where we diced, chopped, and stuffed, learning new techniques along the way. It was just like cooking at home with a glass of wine at your side, but with a group of sous chefs and a professional helping you out every step of the way.

As I made my rounds to each group, I learned that many of the evening’s attendees had come to previous classes and were already planning on coming to future classes at Taste & Technique. Yes, the food is delicious, but I think it’s the atmosphere that Rue has so successfully cultivated that has people laughing, learning, and returning. I’m not the only one who feels this way: Taste & Technique has been voted Best of Monmouth County for two out of the past three years!