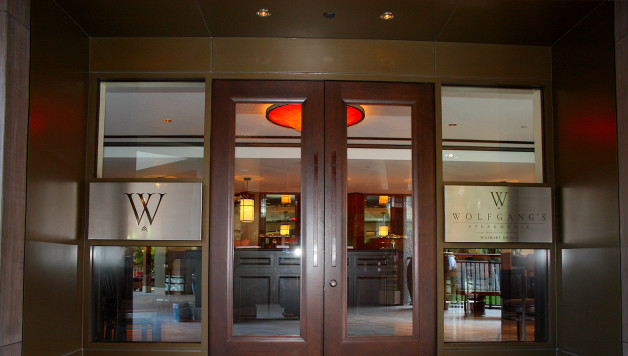 On Wednesday, January 14, the internationally renowned Wolfgang’s Steakhouse hosted a VIP opening reception at its very first New Jersey location, in Somerville. Jersey Bites was invited for a wonderful evening of fine food and drink and we predict that Wolfgang’s will gain a real following.

The evening kicked off with the mayor of Somerville, Brian Gallagher, leading the ribbon cutting ceremony. Other dignitaries included State Senator Bob Smith and State Assemblywoman Donna Simon. Gallagher, Smith, and Simon enjoyed the fine cuisine presented by Wolfgang’s, along with the many other delighted guests.

Stylish and elegant yet comfortable, Wolfgang’s is located on the ground floor of The Edge at Main in the Somerville Town Center. With seating options to accommodate intimate gatherings, groups, and a generous bar space, Wolfgang’s Steakhouse is sure to please.

Seafood specialties including tender lobster, crab, and prawns were served with Wolfgang’s signature sauce and fresh, delicious salads. The restaurant’s renowned, sizzling 28-day dry aged Porterhouse steak was served with other standout entrees on Wolfgang’s menu, including grilled Chilean sea bass, filet mignon, creamed spinach, and German potatoes. Topping of the meal was a selection of fresh fruit and luscious desserts including cheesecake and tiramisu. Owner Wolfgang Zwiener has brought his same elevated steakhouse classics to the Somerville, location with more tantalizing additions to the menu including their new “grill” concept. “We’re proud to be part of the resurgence of Somerville,” said Peter Zwiener, Wolfgang’s son, who is now managing partner of the chain.

Wolfgang Zwiener is well known to the restaurant community. He worked for the famous Peter Luger Steakhouse in Brooklyn for over 40 years and took his dining expertise to open the first Wolfgang’s in 2004. The restaurant empire is now celebrating 10 years of success as one of the top steakhouses in the U.S. and abroad with 11 locations: four in New York City; Somerville, NJ; Miami; Beverly Hills; Waikiki; and abroad in Tokyo, and Marunouchi, Japan, with a new location opening in Seoul, Korea. Wolfgang’s signature is its premium meat, which undergoes an onsite 28-day dry age process—a rare feat.

Marina Kennedy is a lifelong resident of New Jersey and delights in cooking and dining out. With a Russian and Italian background, she grew up with parents and grandparents who loved to cook and shared unique family recipes with her. She focuses her articles on delicious, healthy meals and is proud that her four adult children also enjoy cooking. Marina and her husband, Chuck, have had the pleasure of meeting chefs and restaurateurs throughout the metropolitan area and enjoy a wide variety of gourmet cuisine.  She looks forward to sharing her culinary experiences with readers of Jersey Bites and looks forward to receiving recommendations and comments from her readers in Somerset County and beyond.