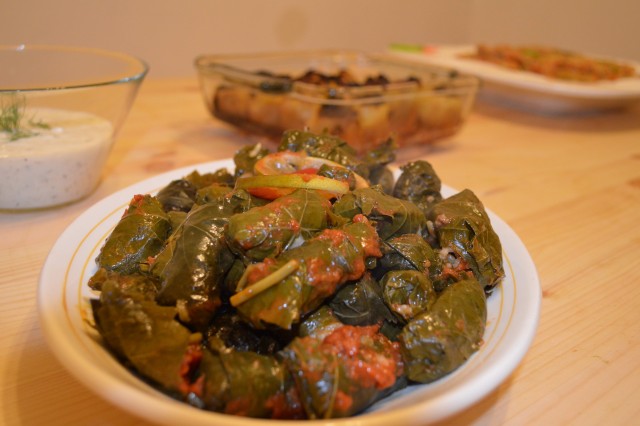 When I was six years old, an Egyptian family moved in across the street from us. I immediately became friends with Nasser who was my age, and the family was gracious and kind enough to invite me to dinner and introduce me to new foods. One day after school, Nasser’s mom had prepared a treat for us that I had never seen before. They looked like mini burritos, wrapped in leaves.

Since that moment, I’ve had a love affair with stuffed grape leaves, aka dolmades. There’s something about the fresh, tart, meaty flavor that they offer. So when I was recently introduced to a chef who had just moved to New Jersey from Dubai, I jumped at the chance to go over her house and learn what real Middle Eastern cooking looks like.

Amel Attia moved to New Jersey in September, bringing her son and daughter to join her older son, currently a Rutgers student. Attia was born in Egypt and lived in Dubai for the past 17 years as a business development director for the Emirates Post, before pursuing her passion for cooking.

Tired of her position at Emirates Post, Attia decided to enroll in a professional cooking certification course in Dubai, where her instructors introduced her to the intricacies of Italian and French cooking. After she graduated, scoring top marks during her practical, she resigned from her position at the Post and started her own private cooking business. It was called Uzoma, which means ‘feast’ in Arabic. Attia was no stranger to cooking for large groups of people, noting that in Dubai, she regularly cooked for crowds of more than 25 people, just for family get togethers.

However, after moving to the United States, she felt that the name Uzoma wouldn’t translate, and instead started Chef Molly, a nickname she acquired in cooking school. Attia is passionate about sharing traditional Middle Eastern inspired meals to dinner plates throughout New Jersey. She focuses on sharing recipes, teaching others how to cook, and cooking Middle Eastern flavors for small dinner parties.

“We have a lot of spice and a lot of life in our food,” said Attia who showed me how to cook a variety of dishes including Mahshy green cabbage, Mahshy potato, Mahshy green peppers, Babaganoush, goulash, and my personal favorite, grape leaves with a yogurt salad. Mahshy means “stuffed” and according to Attia, is a popular dish using any type of vegetable and then adding a stuffing such as rice and meat.

We sat down at her kitchen table, with bowls of uncooked rice mixtures, one with meat for the grape leaves and one with a variety of herbs for the peppers and cabbage leaves, and began stuffing and rolling. I learned the proper technique for rolling a cabbage and grape leaf (similar to a burrito), and also learned how to layer the rolls in a circle, all the way to the top of the pot, and then after it’s cooked, flip it over to form a beautiful tower of food. (Note that I did not flip the pot, but watched Attia’s precise and very athletic move, which I wish I had filmed!)

Since we were using uncooked rice, we had to make sure that the rolls weren’t completely stuffed, as they would almost double in size when finished. All of the Mahshy dishes were cooked in a broth of tomato sauce over the stove and were ready in 30 minutes. Attia’s daughter got home just in time, helping us dig into the delicious feast that we had prepared. The grape leaves were just as I remembered, fresh and tart, while the goulash became a new favorite dish of mine (and my husband’s).

It was an afternoon of learning how flavors that I can find right in my own supermarket can be transformed into something completely exotic. Contact Chef Molly  at 732-500-2373 to set up your own cooking lesson and enjoy the spice of Middle Eastern cuisine at Attia’s home or right in your own kitchen. In the meantime, give this recipe a try!

Preheat the oven to 350°. Heat the oil and add the chopped onion and garlic until it’s sweet. Add the meat and stir, keeping on medium heat for 15 minutes. Turn off the heat and allow the mixture to cool down. Next, mix the milk, beef broth, and butter till the butter melts. Add salt and white pepper to taste. Grease the bottom of a large baking dish. Start layering half the phyllo sheets in the baking dish, alternating one phyllo sheet with a layer of the milk mixture. Then add the meat mixture and continue layering the phyllo sheets and milk mixture. Add the rest of the milk mixture over the last sheet. Cut the sheets to nice size squares before placing in the warm oven, on the top shelf. Bake until the top is golden and crispy, about 20 to 25 minutes.