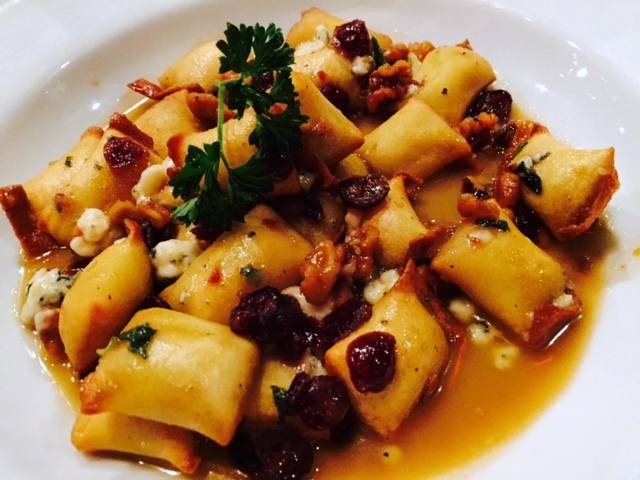 You never know what you’re going to get when you venture into a restaurant with Deal of the Day vouchers in hand. If you’re lucky, you’ll end up with a great score. You may even wind up feeling like you’re part of the family. That’s the feeling we had after our first time dining at Kitchen Consigliere, in Collingswood.

The place has an interesting backstory. Chef/owner Angelo Lutz spent a few years in prison before cooking up a new restaurant idea. As the legend goes, he cooked for his own going-away party the night before he “went away” for a while, leading one attendee to nickname him the “kitchen consigliere.” After being released from prison, he opened a restaurant with a gangster theme. There are several TV screens on the restaurant walls, with old black and white gangster movies playing. A large mural is featured in the background, showing Angelo with some well-known wise guys.

The restaurant was packed on a recent Friday night. Chef Angelo was a welcoming presence, chatting with regulars and newcomers alike. It set the tone for a relaxing and enjoyable meal.

We started with a creamy burrata on Italian bread, a light and flavorful appetizer to share. Our server recommended a fall special of pumpkin gnocchi with dried cranberries, gorgonzola and walnuts in a brown butter sage sauce. He told us that people clamor for its return to the menu every fall. I went with his suggestion and can report that the clamoring crowds got it right. The gnocchi were light, plump pillows bursting with a delicate pumpkin flavor. The brown sage butter sauce married perfectly with the sweetness of the cranberries, the crunch of the walnuts and the savory gorgonzola flavor. I was glad that the portions were ample, since I had enough the bring home to take to work for lunch on Monday. Something to look forward to! John went with the Sunday Gravy entrée from the regular menu, which had a thick, rich tomato gravy over abundant pasta, a huge meatball. short ribs, Italian sausage and beef braciole It was the kind of dish you’d expect to have at an Italian grandmother’s house.

We probably shouldn’t have pressed on toward dessert after eating so well, but we decided to sacrifice the week’s calorie count after hearing about the Brookie. Imagine a two-layer brownie. Now imagine that someone has placed a large, gooey chocolate chip cookie in between the top and bottom layer of the brownie. Then think about that combination with vanilla ice cream, whipped cream and caramel. It was decadence in a bowl, and yet another dish perfect for sharing.

Collingswood has a number of very good Italian restaurants, and we have sampled many of them. Luckily for us, this one is another winner. We’ll definitely be back, but next time, it will be with pants that are a little looser in the waist so we have room for another Brookie!

Beth Christian subsisted primarily on cheeseburgers and liverwurst sandwiches during childhood and refused to try most new foods. Her culinary horizons were expanded during her college days in Schenectady, New York, where she learned the joys of trying slow-simmered Italian dishes, Szechuan cuisine, and everything in between. When not engaged in the practice of law in Monmouth County, Beth is busy scouting out interesting restaurants, farmer’s markets and food purveyors near her home in Burlington County. Beth’s primary dining sidekick is her husband John, but she also enjoys having her daughter Meghan, son Michael and her wonderful friends come along for the ride. Email Beth at BChristian@JerseyBites.com.