When I was a kid, my best friend’s grandfather had a beer fridge out in the garage and, as boys would do back in the day, we went to sneak a couple beers from it. As we reached in, he pointed to the bottles with the iconic three interlocking rings on the label and cautioned, “Not those. He counts those!” I had no idea what was so special about a beer from India, but I left them alone. I certainly didn’t want to get us busted.

Of course, that beer was the legendary Ballantine India Pale Ale. It wasn’t from India, either. Ballantine IPA was originally brewed in Newark, NJ, from the late nineteenth century until 1971. It stayed in production at various locations outside the state, with numerous recipe changes, until 1996 when it was discontinued.

Somehow, I never actually got around to tasting it. Finally, Greg Deuhs, Pabst master brewer, is going to give me the chance.

If you are going to attempt to resurrect an iconic brand and beer like Ballantine IPA, Deuhs is the kind of guy you want to do it with. He served in the U.S. Army from 1984 to 2008 and obtained the rank of Lieutenant Colonel (including active duty from 2003 to 2005). He’s been a process improvement manager, malt house manager, and has been involved with brewing at James Page Brewing, Stroh’s, Miller and the Craft Beer Alliance. Enough said.

Two and a half years ago, when Deuhs interviewed with Pabst, he was told to come in with some ideas on how to reinvent Ballantine as a craft brand. In our conversation, he told me his inspiration was a piece of breweriana that once hung in his office. It happened to be a vintage Ballantine IPA advertising poster. His proposition: To recreate the original Newark recipe. The fact that the recipe on longer existed was no deterrent. He discovered that the original beer had a hint of oak that wasn’t infused from a barrel aging program. It was actually brewed in oak tanks. So Deuhs devised a method to recreate that flavor in stainless steel tanks with a special oak infuser. He also utilized a proprietary hop oil technique that intensifies aroma, flavor and body. Deuhs’s final check on authenticity was to give taste tests to folks who had actually had the beer before the recipe was changed. The man did his homework.

The result is a 7.2% beer with a rich mouthfeel and over 70 IBUs. Balanced? Not really. However, in Deuhs’s words, it’s “a good drinkable beer.” It’s as close as one can get to the original IPA that was first brewed in Newark in 1878 and then for the next 90 years. It’s the beer my buddy’s grandfather would have remembered. Deuhs summed up the lineage of Ballantine IPA by noting, “It’s the beer that inspired Ken Grossman (Sierra Nevada) and Fritz Maytag (Anchor Brewing).”

Maybe this resurrected beer will spawn another craft beer legend. Deuhs described Pabst, a family owned brewery, as having a “craft brewery feel to it.” I get the feeling that they would like to bring back some of Ballantine’s other styles from days of yore. They made a Bock, a Brown Stout and of course, the mythical Burton Ale which was blended, barrel aged and only given to key accounts as Christmas gifts. If you think about it, Ballantine and Sons of Newark, New Jersey was pretty much a craft brewery long before that term was ever used. There’s a ton of nostalgia for the brand here in the northeast and I can’t wait to see what they come up with next. There was no hint from Master brewer Greg Deuhs though. As an ex-military man, he can keep a secret!

Since Pabst was kind enough to provide me with a sample, let’s have a taste shall we? It has a beautiful copper color with a warm off-white head. The nose sports a hint of vanilla oak and orange peel. It has a nice full bodied mouthfeel and sturdy malt backbone. The oak is present up front but the hops finally hit you with a bitter smack at the end. There’s even a vague mineral tang that is so characteristic of UK-style IPAs. This a very drinkable IPA.

If you want to taste some New Jersey brewing history, too, Deuhs told me you will find it in the craft beer section at your local retailer. It will remain in the traditional packaging with the ever-recognizable three-interlocking-rings logo symbolizing purity, strength and flavor. Now I know why my friend’s grandfather kept an eye on his Ballantines. But it might have been worth getting caught for after all. 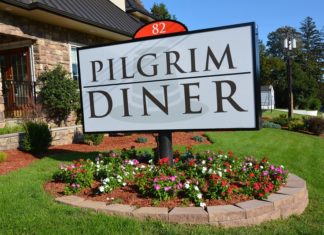 Michael Gabriele - September 14, 2021
The Pilgrim Diner in Cedar Grove is back in business, reclaiming its spot as an eatery on the roadmap of the Diner Capital of...