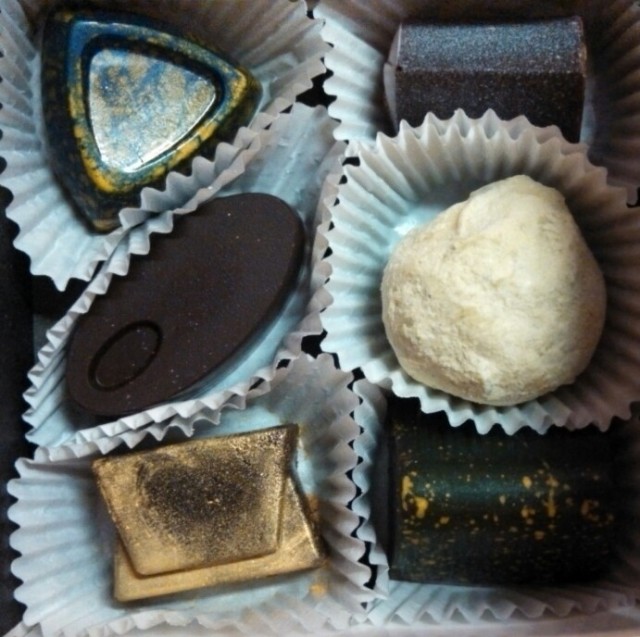 Chef and Master Chocolatier Lisa Mecray Rogers is an artist and chocolate is her medium. Her “Xquisite and Xtraordinary” creations are almost too pretty to eat, (almost!). Once she describes them, your mouth will water and you won’t be able to resist. My advice? Buy a box and hide them behind the vegetables in your fridge—you won’t want to share these babies! These chocolates are a paradox of the best kind: so divinely delicious, eating them feels like a sin!

I was lucky enough to meet Mecray Rogers at the Ramsey Farmer’s Market, where she was recently a featured vendor, and gain insight into her chocolate-coated world.

Mecray Rogers wasn’t always a chocolatier, but she has always been creative. Growing up in an artistic family, she was a painter, jewelry-smith, and loved to be inventive in the kitchen. She recalls being a “frustrated chocoholic” as a kid, eating squares of unsweetened Baker’s Bars, disappointed in the quality of other options. Eventually, she found a career in pharmaceutical advertising, where she tested her chocolate creations on her co-workers and clients, to rave reviews. This inspired her to leave behind the corporate office and pursue her passion for chocolate. Her mother quipped, “Chocolate is your new drug!” Well, mom is always right—Lisa’s chocolates are truly addicting.

Mecray Rogers perfected her craft at the Ecole Chocolat Professional School of Chocolate Arts in Vancouver, British Columbia, and earned her Masters at the L’Ecole Du Grand Chocolat at Valrhona, Tain L’Hermitage in France. Since then, her success has boomed. She was voted among the Best Chocolatiers & Confectioners in America in both 2013 and 2014, and has earned 45 Gold, Silver and Bronze awards from the International Chocolate Salon, TasteTV and the International Chocolate Awards. Of all her accolades, she is most proud of the ones awarded for uniqueness and creativity.

Her endeavor to be different is apparent in every one of her chocolates. Ensuring high quality, she focuses on using all-natural, mostly organic, locally-sourced and American-made ingredients, even though she is mostly influenced by French techniques. With over 200 flavors, she says it’s important to push the envelope. She gets her inspiration from unexpected places—take the story behind her award-winning Nirvana bonbon, for example: Frank Anthony Polito, author of Lost in the ’90s, asked her to create a special flavor for the book’s launch party, so her mind went to grunge and Kurt Cobain.

Often drawing inspiration from cocktails, Mecray Rogers discovered that Cobain’s favorite bar drink was a Jager Bomb (a shot of Jagermeister dropped into Red Bull.) When she tells people that, she said, “People are afraid to try it!” But don’t worry, she assures that most of the alcohol cooks out, just leaving the flavors behind, sure to send you to chocolate nirvana (without the hangover). No matter what your flavor preference, Mecray Rogers has a chocolate to satisfy every craving, from fruits to caramels to bacon.

Mecray Rogers has big things in the works for the very near future, though she can’t give away all her plans. She says we can look forward to seeing her in two more competitions in the next few weeks, as well as the launch of six new flavors and plans to increase distribution. She is also working with a local restaurant to pair her chocolates with their farm-to-table fare.

Along with Debra Marchese, founder of Winerium, LLC, Mecray Rogers also does custom chocolate and wine pairings, through their venture called ChocoVin. So if chocolate and wine pairings sound good to you and your friends, or even if you want to make your business meeting or affair a bit more interesting, do something decadently different and call Lisa. Luxx Chocolat can be purchased online at luxxchocolat.com, Ayza Wine & Chocolate Bar in New York City, where they serve her Hot Choxx artisan hot chocolate on a stick, The Physick Estate Tea House (seasonally) in Cape May, and at various local pop-up boutiques and markets, which are announced on the business’ Facebook page. Chocolate-and-wine pairing events by ChocoVin can be scheduled for private and corporate occasions.