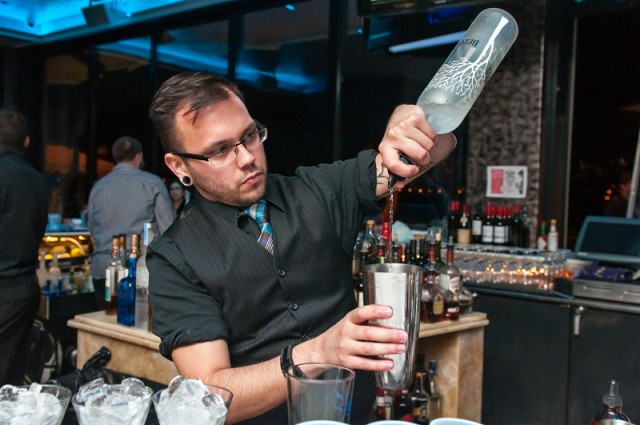 The Iron Shaker returns for its second season and Jersey Bites will be serving on three of the judges’ panels. Tomorrow night (Thursday, September 18) kicks off the first of the competitions. The North Bartender Playoffs start at 7 p.m. at Lulu’s at the W Hotel in Hoboken. Tickets are $25 and that includes a sampling of cocktails from all of the bartenders, as well as appetizers. Similar to last year’s structure, each of the bartenders will compete in four rounds of  assigned cocktail styles. The four highest-scoring bartenders at the end of the night move on to the finals on October 9 at Robert’s Steakhouse in Atlantic City. Jersey Bites contributor Karin Nastawa will judge in tomorrow night’s competition. Veronique Deblois will judge in the Central Jersey competition, and yours truly will be part of the judging panel at the finals in Atlantic City.

The competitors in tomorrow’s North Jersey Iron Shaker include:

The video below is from last year’s final competition.

Launched in 2007, JerseyBites.com began as a home for Deborah’s growing collection of recipes, but soon grew into a hub for food news in the Garden State. In addition to her duties on JerseyBites, Deborah is the owner of Foxtrot Media, a full service digital marketing company that specializes in content development, social media marketing and search engine optimization. She is also a highly sought-after speaker on the topics of restaurant marketing, social media, and blogging. You can learn more about her services and marketing through social media and on her blog at www.DeborahLSmith.com.