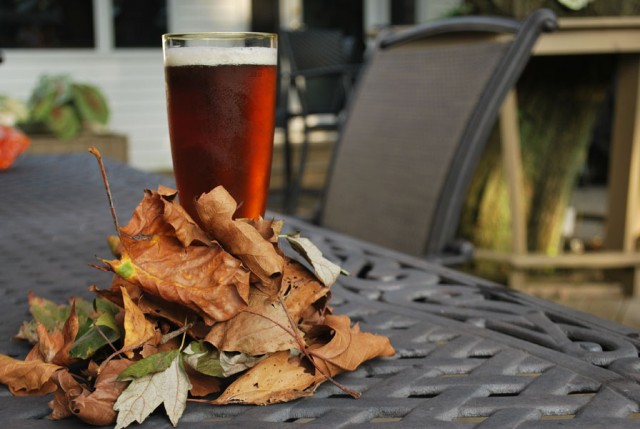 From the Obvious to the Obscure

Labor Day is in the rearview mirror, the kids are back to school and the summer winds have come and gone. On the Jersey Shore, there may be a crisp hint of melancholy in the air but it’s really a time for celebration. Celebrate what? The harvest, of course!

The Garden State has earned its nickname this month. There are blackberries, raspberries and strawberries. Our famous tomatoes and corn are hitting their stride. How about eggplant, beets and cabbage? Don’t forget peaches, pears and pumpkins. Ah, yes, the orange gourd will find its way into just about everything.

And then there’s hops. It’s hop harvesting season too and wherever our friend Humulus lupulus is, there will be beer. As it turns out, the beers of fall are the perfect partner to the diverse yield of vine, stalk and tree at this time of year.

The first thing you’ll think of is that big party over in Germany. Oktoberfest beer is also known as Marzen, which means March beer. Marzen is traditionally brewed in March and stored, or lagered, in ice-filled caves all summer, just waiting to bust out with all the flavors of fall in September and October. The weather is still perfect for grilling and whatever you throw over the coals—veggies or meat—will be right at home with the caramel, bread and firm malt character of Oktoberfest beer. Hundreds of years of German tradition can’t be wrong. If you can’t make it to Munich, you can find Victory Festbier on tap at the Iron Room this season. It’s a full-bodied Oktoberfest made right next door in Pennsylvania.

Now let’s go from the obvious to the not-so-obvious. We may bob for apples, squeeze them into cider and then mull that with spices, but what about the humble pear? The Iron Room hasn’t forgotten the pear. In France, Christian Drouin is well known for their Calvados but they also produce a wonderful pear cider. It finishes its fermentation in the bottle which results in a sparkling dry drink that carries the light, tart flavor and aroma of the pear. Shellfish are still around, so why not? If you fancy a more ironic twist, how about an apple tart?

Back to the obvious. Face it, you aren’t escaping fall without the pumpkin. It’s going to be in your pie and your latte, too. We are just going to embrace it. If you’re looking for pumpkin pie in a glass, Weyerbacher Imperial Pumpkin Ale fits the bill. Cinnamon, nutmeg, cardamon and cloves conspire to put pumpkin pie in a glass. You could have it with dessert (pumpkin pie, of course) or as dessert. For those that like a little more attitude, Tuckahoe Brewing has smashed their pumpkin with their porter to create Chestnut Neck Pumpkin Porter. You don’t have to wait for dessert for this one, although you can. It should pair nicely with grilled meats and spicy dishes, too.

Finally, the last curveball of the season: Lost Abbey Avant Garde. It’s based on the French Biere de Garde which is noted for its funkiness and barnyard notes. This one is a little more subtle in that regard and sports a little spice and fruitiness. Avant Garde will take you right to the end of fall and that Christmas warmup known as Thanksgiving. It goes great with roast turkey or, if you can’t bear the thought of turkey just yet, duck breast could be even better. You wouldn’t have to worry about leftovers, either. Strong, smelly cheeses stand up to Biere de Garde as well. It’s a versatile beer, but just make sure you have a bottle on hand for the third Thursday in November. Just sayin’.

The crowds may be thin at the boardwalk, but that doesn’t mean the party is over. The flavors of fall are as beautiful as the foliage and we’ll be featuring these and other delicious beers all Fall long at The Iron Room. Enjoy!

Paul Tonacci is Managing Partner of the Atlantic City Bottle Company, which has a seasonal menu, small-plate restaurant helmed by Chef Kevin Cronin, and a packaged-goods store specializing in wine, whiskey, craft beer. The specialty spirits store is Taste In or Take Home. Voted Atlantic City’s Best Restaurant by Trip Advisor. Check them out on Facebook and Twitter.