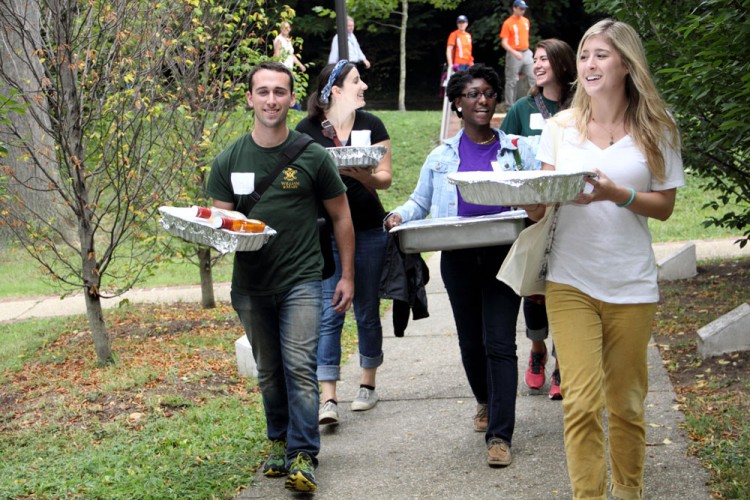 Ever wonder what happens to the leftover food from cafeterias at the end of the night?

Well, at universities around the country, Campus Kitchens ensures it gets to the right place – into the stomachs of needy people in those schools’ communities.

Founded in 2001, Campus Kitchens is a student-run organization that prepares surplus foods and distributes them to hungry locals while also teaching students and the public about food waste and healthy eating. The organization currently has 39 high school and university locations, including one opening at Richard Stockton College in Atlantic City and another, which recently opened at Saint Peter’s University in Jersey City.

Linda Kurtz, the online community engagement manager for Campus Kitchens, said the organization has recovered more than three million pounds of food since its beginnings. That food has been used to create more than two million meals.

“The whole premise is that it’s addressing not only hunger but food waste, which is a huge issue,” she said.

Students can’t prevent cafeteria users from taking too much food on their trays. They can, however, take the additional food that cafeteria workers prepared to make a meal. Kurtz used the example of a vendor preparing 25 pounds of lasagna, but only using 24. That additional pound could be combined with other food there to create dinners for community members.

Another common food source is grocery stores, where students take food that is about to expire. Some also rely on excess from farmers markets, as many vendors would rather give their unsold goods to the community than lug it home.

Kurtz praised the program for serving additional needs in the community, such as filling the knowledge gap on healthy eating for disadvantaged families.

“Not only do our students work to use the recovered food, but they also go beyond the meal to do programs that will help the people they serve,” she said.

Besides nutrition education programs, students will create community gardens and collaborate with their communities to create a healthy food source.

The national Campus Kitchens project also trains students in leadership and community service, a pretty necessary part of forming a new chapter; the process takes months and involves coordinating with school and local officials. Depending on the school, they can also form a partnership with a local charity organization. Previous partners have included United Way and the Boys’ and Girls’ Club of America.

Students develop a passion for community service and hunger programs, Kurtz added. “Sometimes students will move to a new area and realize, this is what it’s like off campus,” she said. “They realize they want to help address poverty and hunger issues.” And that they do.

For more information or to get your school, college, or university involved, check out Campus Kitchens.

Intern: Erin Petenko, a Journalism major at Rutgers University, is a native of Edison in Middlesex County. She has a passion for traveling and eating – and combining the two! Her favorite foods include Indian, Thai, and Jersey Shore boardwalk food. Outside of class, she works as editor for Rutgers’ newspaper, The Daily Targum. She would love to continue to share her passion for traveling and exploring both new locales and new dishes beyond college.