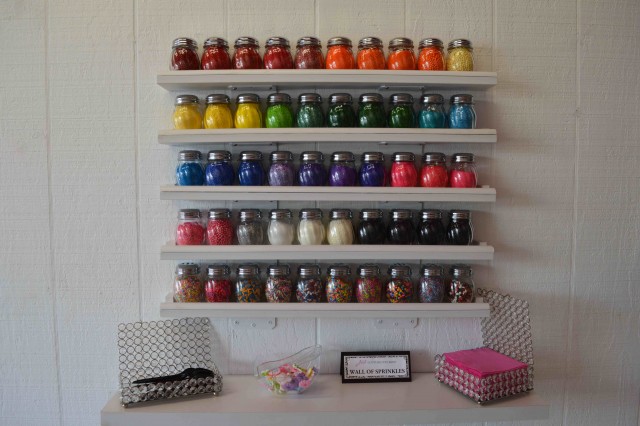 At the age of 19, Jessica Bucceri decided to follow her dreams and her passion. But she didn’t expect the outpouring of support she got. So far, her enthusiasm and deliciously sweet cupcakes have brought hundreds over to the sweet side, helping her open the doors to her very own bakery, JB Couture Cakes in Belmar, this past June.

Since she was just 15, friends and family could find Bucceri busy baking cakes and cupcakes. Two year later, after graduating from the Culinary Arts Academy in Freehold, Bucceri was accepted into the College of Culinary Arts at Johnson and Wales. Unfortunately, Bucceri became overwrought with anxiety and deferred her college acceptance.

Bucceri’s anxiety continued to worsen, making it difficult for her to leave the house. Despite her plight, Bucceri put her time at home to good use, dreaming, planning, baking (a lot), and showcasing all of her work on Facebook. Her efforts paid off and soon Bucceri found herself busy baking for client events every weekend. She knew she wanted to expand and that she had the talent. The only thing she needed was the money.

After launching a Kickstarter campaign, Bucceri appeared Memorial Day weekend on News 12 with Veronica De La Cruz. She received widespread support after her appearance, especially from individuals dealing with anxiety or parents of children who were suffering. Her favorite message stated, “There’s light at the end of the tunnel.” For Bucceri, that light is bathed in buttercream with sparkling sprinkles. With the help of people who believed in her, Bucceri raised $5,000, which allowed her to put her plans into action.

Walking into JB Couture Cakes, you’re immediately transported into what feels like a glitzy Parisian bakery. It’s small, but every detail is accounted for, from the pink walls to the chandelier to the Wall of Sprinkles, where customers can decorate their own cupcakes with 50 varities sprinkles in every color you could imagine.

When asked about her goal for JB Couture Cakes, Bucceri said, “I wanted people to have the whole experience. Be hands on, be a part of the shop and just have a fun time.”

If you’re feeling lazy about decorating, Bucceri has you covered with her signature six staple cupcakes and a special of the week, which, when I visited, happened to be a marble cupcake with vanilla buttercream, drenched in chocolate ganache and sprinkled with white chocolate curls. An absolutely divine mess, which I thoroughly enjoyed eating. There’s also the fan favorite salted caramel pretzel cupcake, the s’mores cupcake with toasted marshmallows, and the simple birthday cake cupcake.

Most of Bucceri’s cupcakes are “filled” with ganache, raspberries, or another sweet and all of her cupcakes feature real buttercream from actual butter, not hydrogenated oils. The decadent cream complements the light, fluffy cake. Before biting into your cupcake, take a picture at the JB Couture V.I.P. wall and Bucceri will hang your picture up on her wall of fame. It’s her testament to her customers, those people whose support made it possible for her to be able to open her doors.

This fall, you can find her selling cupcakes at Rutgers football games and possibly on a future episode of Shark Tank. (She’s already passed through three separate interviews and overnighted cupcakes with pastry bags of her buttercream to Los Angeles. When I asked how much that cost, she said “a lot.”)

Bucceri is taking orders for specialty cakes and cupcakes. She’s staying busy and sweet, just the way she dreamed.