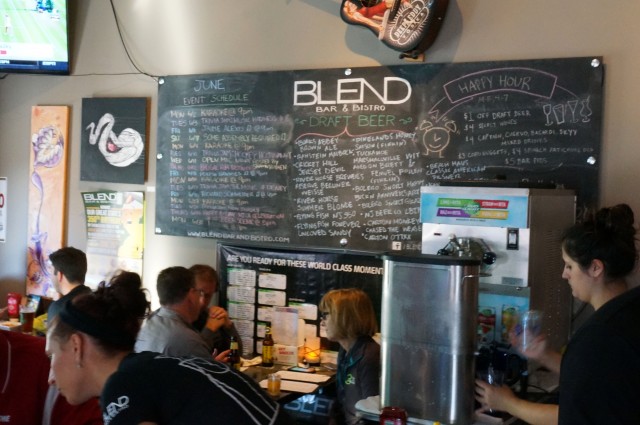 Did you know that Rinn Duin Brewery completely neutralizes its water and, using a computer program, rebuilds the mineral profile to match the mineral profiles in the water in London and other UK locations to make sure their styles are authentic?

That’s the kind of information you get when you’re surrounded by craft brewers who are just hanging out and having a beer. And it’s just the atmosphere Rick Stripp, Jr., of Blend Bistro in Hamilton Square, had in mind when he decided to throw a 350th birthday party for New Jersey. The Garden State has a rich brewing history, going back to its earliest settlers, so why not celebrate with a who’s who party of home-state craft brewers?  Once Mike Kivowitz and his New Jersey Craft Beer juggernaut pitched in, the party was on. (Check NJ Craft Beer for the beer list.)

Stripp, a College of New Jersey grad with a business degree, was born into the bar business. His dad owned and operated the Stateliner Pub in Phillipsburg. He’s also a Cicerone certified (Server) beer geek, too. Stripp’s idea for hosting the event was pretty simple: “I really just wanted to showcase New Jersey’s growing beer scene. And not just the product, but the people… the people who make it, sell it, and drink it. We’re all lucky to be a part of it and I wanted us all to have a chance to celebrate that together.”

The event was punctuated by six hours of music by various New Jersey artists playing in the background and a special menu liberally sprinkled with pork roll (Trenton quesadilla, anyone?). But behind the bar were the real stars. Eighteen beers from breweries all over the state certainly tell the story of how serious Blend is about New Jersey’s craft beer scene.  So does the fact that they also invited the people who made those beers.

And they showed up.

Imagine going to happy hour for a beer at your local pub and the person who made that beer happens to be sitting next to you. You order a second one, and the brewer that made that beer walks in. Now the three of you are having a conversation about flavors, styles or ingredients. You’re having that conversation because the brewers aren’t busy pulling tap handles at a beer fest. They’re hanging out, just like you. You’re learning things about their beer, and them, that you never knew. That is really what craft beer is all about.

I hope we see more events like this in the future. It was great to get the people responsible for making the beers you love out from behind the jockey box and into the mix. Just watching the handshakes, hugs and backslaps is enough to prove there is a happy band of brewers right here in New Jersey.

If you missed the party, I’m sorry. But you may want to keep an eye on Blend Bistro. Rick called the event a grand success and is considering putting this on the calendar again. One can hope.