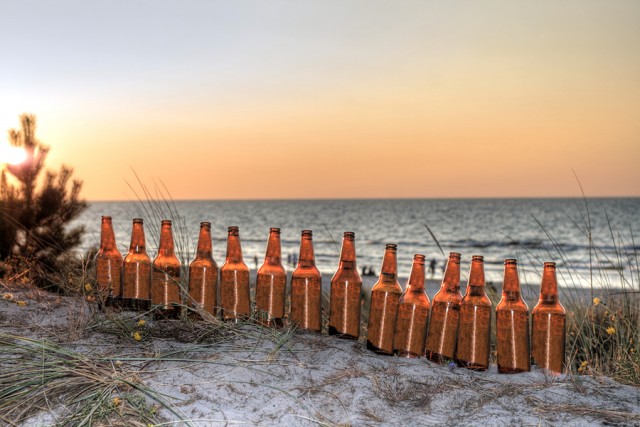 The Jersey Shore annual summer mayhem is back in full force and the boys of summer have returned to the baseball diamond. In the world of craft beer, this means that the beers of summer have taken center stage. The rising temperature doesn’t require that we have to sacrifice flavor to slake our thirst, though. So slip on your bathing suit, break out the sun block, and explore the flavors of summer.

Often referred to as “the people’s champagne,” Berliner Weisse is a great place to start. It’s a tad bit sour, fruity, and bubbly. Fermentation takes place not with just yeast, but also lactic-acid bacteria which impart the sour notes. Berliners usually add a “Schuss” or shot of raspberry or woodruff syrup to sweeten it up, but it’s more than refreshing without it. Since it’s usually less than 3%ABV, you’ll be just fine quaffing it in the hot sun.

A cousin of Berliner Weisse is another German favorite: Hefeweizen. It’s also a wheat based beer that is unfiltered, which imparts a pleasing hazy glow. The unique yeast strains used in Hefeweizen produce a complexity of flavors from cloves (due to phenols) to bubble gum or banana (a result of esters). Pour it slowly into a nice tall glass and swirl the last quarter of the bottle around to pick up the sediment and get the full flavor. Leave out the lemon slice, which Americans usually use as a garnish—it will kill the fluffy head on the beer. Hefeweizens already have a tart, thirst quenching finish and don’t really benefit from the lemon.

Saison or Farmhouse Ale has been rehydrating Belgian farm workers for centuries, brewed in the winter to be stored until summer. Saisons pick up “wild” yeast strains of whatever is floating around at the particular farm where they are made. The result tends to be a little spicy, earthy with a dry finish. They’re perfect for reviving you after a hot day of planting tomatoes.

When you think of “lawnmower beers,” one style you have to include is the Blonde Ale. It’s really the ale version of a standard lager. They are bready, toasty and are very lightly hopped. They are easy drinking but can carry a bit of complexity. Blondes are very versatile, too. Brewers like to experiment with extra ingredients to create their own, unique spin on them.

Hops don’t have to take the summer off. Session beers are all the rage now and IPA versions are probably the most popular of the category. They deliver a full hop profile in a lighter package and an ABV that won’t spin your head. The hops really shine in Session IPAs and can impart citrus, grassy, piney or fruity flavors depending the hop mix. The reduced malt backbone on these beers make them hard to balance, but brewers seem be rising to the challenge across the country.

In the Iron Room at the AC Bottle Shop, we’ll be celebrating the beers of summer all season. Here are some of the summer beers you can expect to see tapped in the next few months:

Cape May Tower 23: a refreshing and tart Berliner Weisse
Riverhorse Summer Blonde: the epitome of the style
Shipyard Export Ale: another easy drinking American Blonde
21st Amendment Hell or High Watermelon: because what’s summer without watermelon?
DuClaw Funk: once again, a wheat beer but with Blueberry this time
Captain Lawrence Sun Block: subtle spice and lemon with a clean, dry finish
Stone Go To IPA: a session IPA which, according to Stone, contains “an irrational amount of hops”
Victory Hop Ticket: a citrusy session IPA
Founders All Day IPA: a Founders IPA under 5% ABV? Pass us another!
Carton Boat Beer: Carton made this session beer before it was fashionable. Grapefruit, pine, light and lively.