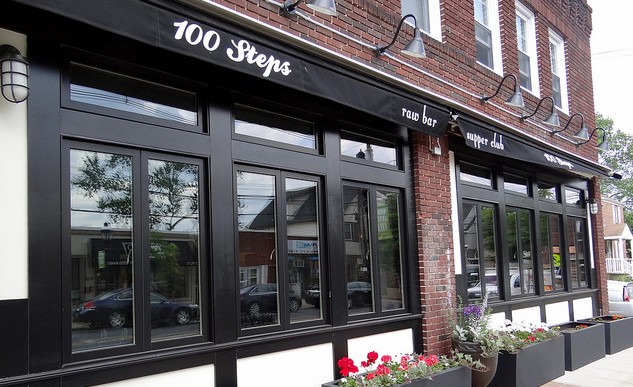 After opening their second restaurant in Cranford, you might think that Andrea and Jim Carbine would be content to sit back and relax. “Relax” is just not in their vocabulary, though, as their two restaurants—under the umbrella of Local Roots Cranford—A Toute Heure and 100 Steps, have quite a bit coming up.

100 Steps is the newer restaurant and one of the reasons it was started was to give Executive Chef Kara Decker the freedom to create her own menu based on the ingredients and dishes she loves. In April, Chef Decker overhauled the menu to adapt to the changing seasons and will continue to tweak it depending on what’s available. The current menu includes dishes like king salmon with marinated cucumber, snapper crudo, beef and chorizo meatballs, and duck ragu with homemade pasta. 100 Steps also recently started a Happy Hour, which is every Thursday through Saturday from 4 to 5:30 p.m. and welcomes customers to just walk in and enjoy mocktails, bar sandwiches, and oysters.

Even as the Carbines and Chef Decker nurture 100 Steps through its first year they maintain their focus on A Toute Heure, their flagship restaurant. A Toute Heure recently started offering Community Hour, on Tuesday through Friday from 4:30 to 5:30 p.m. where they offer their famous burgers, along with a few other items. A dollar from each burger is donated to a monthly charity, with May’s recipient having been American Farmland Trust, an organization dedicated to farming and farmers. A Toute Heure is also planning Pop-Ups this summer, including one with the owner of &grain in Garwood and the chef from Arturo’s and Razza.

For all of the latest information on the events Local Roots Cranford has planned make sure to follow them on Facebook and Twitter. It would be hard to find restaurant owners who work as hard as the Carbines and the fruits of their labor can be seen in not only the success of their restaurants, but in the loyal following and goodwill they receive from their customers.