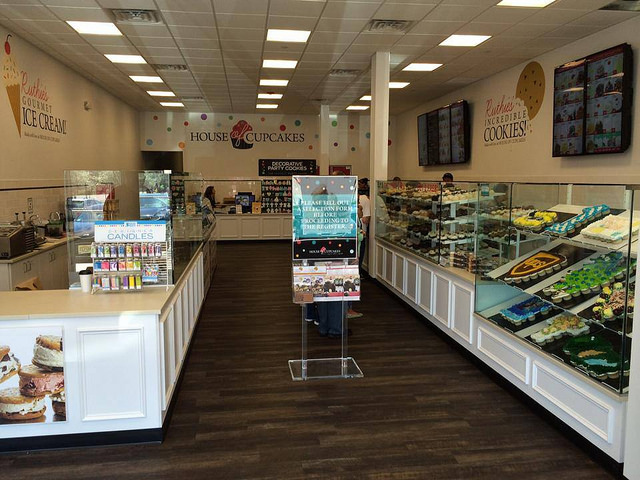 In case you missed the grand opening of the new location of House of Cupcakes in Clifton, Jersey Bites and The Cook’s Tour have the scoop!

House of Cupcakes managing partner Ron Bzdewka told me a charming story about how he and his wife, Ruthie, got started in the cupcake business. Several years ago, they were at a street fair, saw a long line in front of a cupcake stand, and Ruthie had a revelation: “I want to open a cupcake store!” Like a smart husband, he went along with his wife’s idea, and this simple chain of events evolved into House of Cupcakes.

The Bzdewkas found a small storefront in Princeton, not more than 600 square feet, and launched their soon-to-be empire. The 2008 economic downturn put a temporary crimp in their plans, but they came roaring back.

The couple reconnected with an old friend from their days as Party City franchisees, Syeve Mandell, who was looking for a new venture. Mandell loved the concept and put together a franchising plan to take House of Cupcakes to new heights.

Ruthie, a self-taught baker, is always looking to try new things. And Ron said his background in construction is not so different from baking. “Mixing concrete is the same as mixing dough!” he said.

They bake 45 different flavors each day. How do they come up with the flavors? A lot of the suggestions have come from customers. When they first started out, they developed a flavor plan – whatever sells, they keep on the menu. Additionally, they don’t want anybody to walk away disappointed, so they don’t rotate flavors, they bake every flavor every day! And then they add in seasonal cupcakes like peppermint for Christmas or pumpkin for the fall. They start out with 1,000 cupcakes each day at every store and then just keep going.

The original House of Cupcakes in Princeton is temporarily closed due to a fire, but will reopen later this summer at double its original size and with seating for 30. The Bzdewkas are planning some big surprises for the reopening, so stay tuned.

The Clifton store is their most recent opening, but later this summer, an additional location will open in Wayne. I asked Ron how many stores they plan to open, and he said “as many as we can, pending the right locations.”

Ron and Ruthie are the winners of season two of Cupcake Wars on The Food Network. When they first received an email from the Food Network inviting them to audition for the series, but Ron thought it was junk mail and he deleted it! Luckily, the network followed up. Ron ran out, bought a video camera, they produced an audition tape overnight, and two days later they were on the show. Needless to say, after that, their business exploded, and they’ve been on a straight shot ever since. They’ve just introduced cheesecake and ice cream, as well as vegan and gluten-free cookies.

Ron said they want House of Cupcakes to be the kind of place where everybody leaves happy. Sounds like a good philosophy to me!

Now, how about winning a dozen cupcakes for yourself? To enter, click on over to House of Cupcakes and take a look at the many fabulous flavors they offer, then come back to tell us your favorite by leaving a comment below.

Be sure to leave your contact email in your entry if one is not tied to your user account. If there is no contact information, we will have to pick another winner.

You can also gain an extra entry by tweeting or blogging about this giveaway. You must come back and leave a comment and link to your tweet or blog post to be counted. Winner must be able to pick up prize at the Clifton or East Brunswick location.  The contest runs from June 20, 2014, to Saturday, July 5, 2014, at 11:59 p.m. The winner will be contacted on July 6. Winners will be chosen with the help of Random.org. Good luck!

Must be 18 years or older to enter. Entry must include an email address for notification.

No substitutions allowed and the prize is not transferable and cannot be exchanged for cash in lieu of the prize.

NO PURCHASE NECESSARY TO ENTER OR CLAIM PRIZE.

GENERAL CONDITIONS. By accepting the prize, the winner and companion agree to release and hold harmless Foxtrot Media LLC. and House of Cupcakes and its subsidiaries and advertising and promotion agencies from any and all liability including all claims arising from, but not limited to injuries or damages of any kind sustained in connection with the acceptance, enjoyment and/or use or misuse of any prize(s) received in this promotion. By accepting the prize, the winner is responsible for any applicable federal, state and local tax in connection with winning this prize.

Terry Krongold is a life-long, passionate baker. In addition to a full-time job in the pharmaceutical industry, Terry has been involved with food for many years, including co-ownership of a dessert catering company in the late eighties called I Love Cheesecake, specializing in fine cheesecake and unique desserts. Terry is the author of The Cook’s Tour, a blog focused on food, baking, and travel. When not working, writing, or baking, she spends time planning vacations around restaurants to visit. She can be reached at terry@cookstour.net.