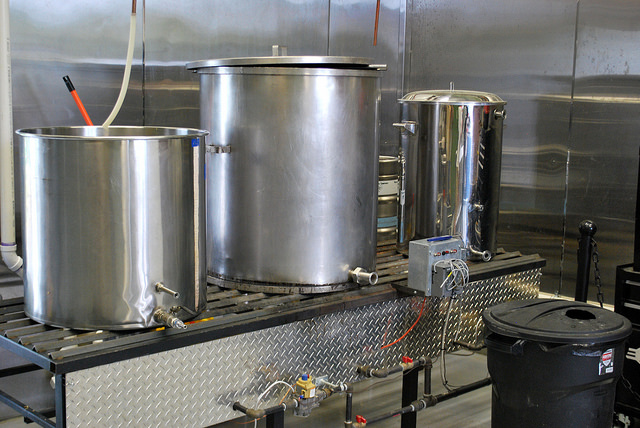 The first time I tasted Pinelands Brewing Pitch Pine Ale at the Atlantic City Beer Fest, I took notice. I had no idea it would be voted Best NJ Beer at the event, but I knew it was damn good. And I knew I wanted to have another.

I’m getting kind of spoiled. I’ve come to expect to find New Jersey craft beers wherever I go these days. In the case of Pinelands Brewing, though, there is only one place to find it. Jay Chapman, the brewer at Pinelands, told me, “We only have one account, and you’re standing in it.”

I had made the trip down to Tuckerton to visit the brewery and the place was so small that I barely needed to swivel my head to take the tour. That’s no exaggeration. It’s a 3 bbl. nano brewery that sells everything they make during their tasting hours right there on premises. I mean, they have literally run out of beer without distributing a single drop. That is some serious local support.

Arriving an hour earlier than the their new tasting hours, which are 2 p.m. to 6 p.m. on Saturdays, I found a few locals already hanging out. They talked me into trying the Evan John Porter first, instead of the Pitch Pine I had been pining for. It had an upfront sweetness and a dry finish that makes it a very drinkable porter. As good as it was, it was the conversation that impressed me the most. Those regulars couldn’t stop talking about the beer. In fact, as the tiny brewery began to fill up, it was almost impossible to talk to the staff who were busy filling growlers and pints.

When Jay Chapman, who sports the almost obligatory brewer’s beard, and his partners cobbled together this little brewery (Jay built the brewing system from scratch), they also tapped into local Piney pride. As I listened to conversations about last names that have been around for generations, it was apparent that there was more going on here than just great beer. They are creating a tradition. While some of the guests had traveled a fair distance, it was obvious that Pinelands Brewing was a local hangout. Go for the beer, stay for the banter. And that’s exactly what I did.

There’s a small picnic area out back that made me wish I’d brought a sandwich or something. They also make their own soda, so there were quite a few kids contributing their own tasting notes. If the kids really like the soda, you can bring home a growler of that, too.

When I finally got to trying a pint of their Pitch Pine Pale Ale, it was a little under carbonated which made it drink more like a cask ale. Its piney hop essence evoked memories of the times I’ve been canoeing down in the Pinelands. It’s so popular that I couldn’t take home a growler of it. Instead, I opted for the tart and summery Saison. That turned out to be just the thing for a rapidly heating up Memorial Day weekend.

In the end, there are 4 guys with day jobs brewing up great beer in the Pinelands of New Jersey because they love it. Like a garage band, they practice their craft into the wee hours of the night. Their sound is beer and it’s reverberating through the scrub pines. You will probably be seeing Pinelands beers on tap in local establishments soon, but if you are traveling to the Jersey Shore this summer, stop by the brewery. Even if you aren’t a beer geek like me, you will undoubtedly soak up some South Jersey culture and most likely stay longer than you had planned.

After all, beer is the ultimate social stimulant and Pinelands Brewing is no exception—to say the least.