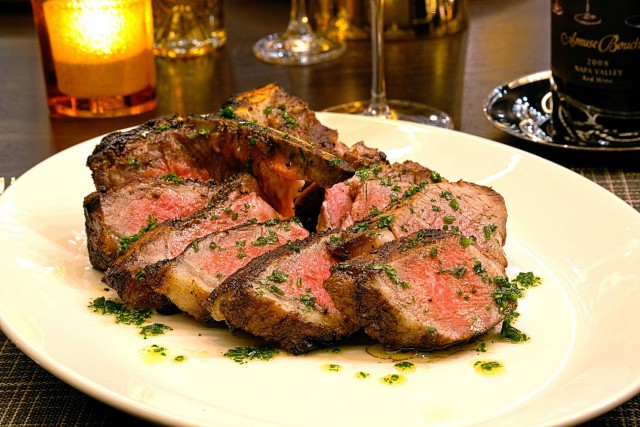 When Robert’s Steakhouse of New York came to Atlantic City in November 2012, its reputation preceded it. Known as one of the top steakhouses in Manhattan (Vogue Magazine proclaimed it “the best steak dinner in town”), folks were already salivating at the mere mention of the restaurant coming to the Jersey shore.

When it finally arrived, it did not disappoint.

Visually, it’s stunning. Two firms were hired to collaborate in its design: SOSH, an A.C. architecture firm, and ICrave, a Manhattan design studio, who together crafted a contemporary and chic 8,000-square-foot space.
At the entrance, there’s a double-sided fireplace that roars year-round. Upon entering, you find yourself promenading on a dazzling Italian terrazzo mosaic tile floor that leads to a dark, beautiful bar. Sumptuous coffee-colored leather sofas and chairs surround the lounge, which is overlooked by dramatic modern art on the walls. Just beyond the bar area is the main dining space, which is larger than it seems from outside. It’s warm, open and inviting, with enormously plush semi-circular booths and oval-shaped lighting that seemingly float from above.

When my guest and I arrived at the restaurant, we were immediately greeted by General Manager, Sal Spena, as if we were old friends. As he seated us in one of those cushy booths, we asked what we should try first. Instantaneously he replied, “The tuna tartare – it’s out of this world.”

Despite the hyperbole, there was something in Spena’s tone of voice that made you actually believe that their Asian-style tuna tartare was indeed other worldly.

Executive Chef Will Savarese was trained at the Culinary Institute of America (CIA), touted as the “world’s premier culinary college,” and brings over 20 years of restaurant expertise to Robert’s. His mission is to ensure that guests have the most unforgettable and scrumptious dining experience in Atlantic City. Beautifully presented and extraordinarily tasty, Savarese added delicate Asian spices to this delightful sushi-grade tuna that flawlessly enhanced its natural flavor.

This course was followed by two salads: the “Robert’s” and the “Hail Caesar.” The Robert’s salad was filled with sizable chunks of lobster and shrimp, veggies like French beans and tomatoes, sweet mango and a citrus dressing. It was light and yummy. As for the Caesar, we were thrilled that they supplied anchovies (a necessity to us) when we requested them.

After hors d’oeuvre and salads we were presented with an intermezzo – a seared scallop the size of a softball. Our initial fear was that a scallop this large may be on the tougher side with little taste. However, our fears were easily assuaged as it was tender and absolutely delicious.

Next, Spena recommended – nay, instructed – that we order steaks for our main courses. After all, what’s a trip to Robert’s without it? It’d be like visiting Paris without seeing the Eiffel Tower or going to Disney World and not take a selfie with Mickey Mouse.

Robert’s has a highly secretive proprietary dry-aging process for their beef, which is done on site. The little that was revealed about it was that Robert’s ages their beef for six weeks, where most places age it for only two. The process boosts the beef’s natural flavor and enriches its tenderness. It’s an extremely expensive process that is displayed in the menu price of their steaks. But they are worth every penny. I had the New York Strip and my guest had the Rib Eye. Both were beyond flavorful and we both agreed that they were without question the best steaks either of us has ever consumed. There’s a reason that Robert’s – in Atlantic City, mind you – was awarded Philadelphia Magazine’s “Best of Philly Steakhouse” (that’s Best of PHILLY) in 2013.

Accompaniments to dinner were creamed spinach, which was not overly creamy (a big plus), and “Everything” fries – fries that have everything that an Everything bagel has. To this self-proclaimed fry connoisseur, they were Heaven on a plate. We were urged at the beginning of the meal to make sure we saved room for dessert. Alas, we were unable to do so. But a lovely plate of adorable assorted petit fours were served anyway. They proved to be just the right amount of a sweet course needed.

For many, Robert’s is a place solely for special occasions, or ideal if you carry a corporate card, as it’s quite pricey. So start saving your money because this is a dining experience you do not want to miss, as a meal here will produce enjoyable memories and appetizing stories to last a lifetime.

Pamela Dollak: Currently Pamela is a freelance writer with The Press of Atlantic City and Uwishunu.com, she has her own weekly shopping column (“Shop Atlantic City”) on AtlanticCityInsiders.com, and a weekly nightlife column (“5 Things to Know About…”) in At The Shore Magazine. A former New York P.R. maven, Pamela Dollak has written on and pitched everything from fashion and foster care, to veterinary medicine and vitamin-enhanced water, to personalized perfume and Peter Max. Fascinated with fashion from an early age, Pamela opened a boutique called Tony, which became a go-to spot in Philadelphia for cocktail dresses, casual wear and accessories for six years. Both she and the shop won multiple awards and accolades and were featured in various fashion publications as well as on local television programs. Pamela is also an actress who has been seen on stages from Philly to the Jersey shore. As for food, well…she may not be able to cook a lick, but she knows good food when she tastes it!

Michael Gabriele - September 18, 2021
A new epoch in the history of the Diner Capital of the World is about to open in East Newark: the new Tops Diner....