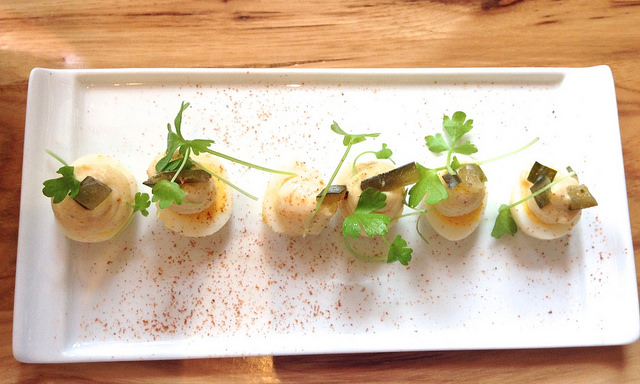 Opened a year ago in the former home of a local sushi house, Mistral in Princeton is unassuming from the outside. Once inside, diners are invited to take in the scents and sights. From the rustic walls, to the open kitchen and the bevy of small plates being ushered around, the mood is relaxed yet lively. “First and foremost I hope the diners that visit Mistral have a delicious and tasty meal,” said says Chef de Cuisine Ben Nerenhausen. “I also hope that it can be thought provoking and beautiful. Really a touch on all the senses.”

A last-minute invite from my sister prompted the trip from Hoboken, where we both live. Princeton is our cherished hometown. We spent our childhoods waiting in line for ice cream, running through the halls of the Nassau Inn, laying on the grass in Palmer Square and hanging out on the Princeton University campus when we were much too young to be there. This town was our backyard and yet…a great new restaurant had opened a year before and I hadn’t yet been to visit? Time to fix that.

Since Mistral is a BYO, we picked up an inexpensive bottle of rosé, just a block from the restaurant, at Public Wine & Spirits. We were greeted and seated quickly at a two top, near the back of the small dining room. The placemats double as menus, which is small and filled with shareable plates constructed from local ingredients. Says Nerenhausen, “The small plates format came from [Chef Scott Anderson]. However I easily fell into place with it due to my fine dining background. The smaller more intricate portions were very similar to small plates.” He also notes that his upbringing abroad definitely influenced the eclectic food style as well.

Our wine was opened and in lieu of the usual bread bowl, we crunched on beautiful puffs of rice. Luckily my sister and I have similar tastes so we were able to quickly select a few menu items to share: mini deviled quails’ eggs, pork belly salad, goat cheese cannelloni and the Mistral burger, which is served only at lunch.

The plates arrived as ready. The deviled quail eggs were fantastic, with an added punch from the pickled jalapeños. We wished for three more orders, but didn’t have too much time to linger on those thoughts, as the pork belly salad arrived shortly after. A beautiful presentation, but it was our least favorite of the dishes. The bitter and spice of the watercress overwhelmed the lightly cured pork belly, even overpowering the robust flavors of the Szechuan vinaigrette. Next to arrive – the goat cheese cannelloni. The cannelloni itself was darker than we expected, but the classic harmony of goat cheese and leeks paired with hearty sips of rosé was an incredible mix. Lastly our burger – requested rare  – arrived. They nailed it. A little homemade ketchup and some sweet potato fries, these Jersey girls were in “we’re too stuffed to move” heaven.

Overall we had a great experience – ever critics, we had a few things we would have changed – yet, neither of us has been nominated as a James Beard semi-finalist for chef of the year either. So we’d like to give credit to Nerenhausen; also executive Chef Scott Anderson, a semi-finalist for rising star chef of the year himself. The two have created a must-see and dine experience, with inventive creations and international flair.

They have also recently completed an outdoor patio, creating more space for hungry diners. What does Chef Nerenhausen recommend? His “favorite dish right now is probably the halibut with ham and shrimp.” They also have plans “to one day add a tasting menu of sorts so one can get an overall experience for one price,” adds Nerenhausen. Looking forward to the warm weather on the new patio and trying the bacon beignets with molasses and creme fraiche that we were simply too stuffed to try!

Karin Nastawa grew up in the great Garden State, leaving only briefly to attend college in Philadelphia, where she developed a love for all things cheesesteaks. She has lived in Hoboken for over nine years, taking in the incredible dining scenes on both sides of the river and has a particular affinity for staking out interesting BYO establishments in Hudson County. She is the founder and owner of VinEatsi, a boutique wine & food digital marketing agency and has also studied wine and spirits extensively, receiving her advanced degree from the Wine & Spirits Education Trust (WSET). Along with running VinEatsi, she is an avid cook and food enthusiast and writes about her wine & food adventures in the VinEatsi blog. She dreams of having a chef’s kitchen and a state-of-the-art wine cellar filled with Sonoma Coast Pinot Noir and Left Bank Bordeaux… someday.