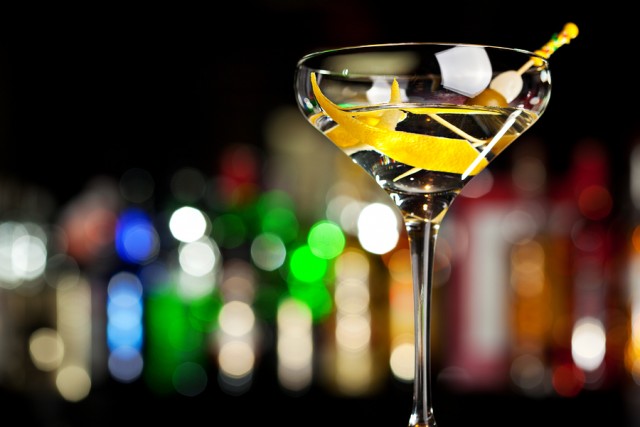 These days, it seems like you can throw just about any liquid together, pour it into the classically elegant martini glass, and call it some kind of “-tini.” Yet none of those concoctions comes close to the simple brilliance of the orig­inal, true martini. As winter becomes just a bad memory and summer dangles almost within reach, a cool, clear, and crisply dry martini becomes the perfect complementary elixir for the cheering weather. Its roots trace back to the nineteenth century, but this venerable cocktail has evolved over time.

While no one knows for sure, it may have been born in the Occidental Hotel in 1860s San Francisco as a drink known as the Martinez. Unlike today’s dry martini, it would have showcased sweet vermouth with gin as the background player. Before London Dry gin became popular, gin was a much sweeter drink and the Martinez probably had more in common with a Manhattan than just the signature glass they both reside in. In the run up to Prohibition, the easy-to-obtain dry gin was paired with new dry Vermouth being produced in Italy: Martini & Rossi. Gin slowly became the star of this cocktail and the name may have morphed in order to pay tribute to its new companion.

The martini was made by adding the gin and vermouth to a pitcher of ice then gently stirred with a bar spoon. Then it was slowly poured through a strainer into the familiar stemmed cone shaped glass leaving no bubbles. Crystal clear. A twist of lemon rind was squeezed over the top, then used to rim the glass with citrus oil and finally dropped into the glass as a garnish. It was the epitome of traditional sophistication.

Then came Bond. James Bond. He shook things up. Literally. James Bond author Ian Fleming may have been emphasizing his character’s roguish nature by ordering his martini shaken, instead of the traditional stirred. What’s more, he did away with the gin in favor of the then-newly-popular vodka. Perhaps it was an ironic nod to Bond’s main adversaries? Vodka became readily available in the United States in the ’50s and became more and more popular as the main ingredient in a martini. The martini fell out of favor in the ’70s but came roaring back in the late ’80s and has stuck around to the present.

Be sure you mark your calendar for June 19: National Martini Day! You won’t get a day off from work that day, but you will get a perfect excuse to mix up this simple, elegant, and quintessentially American cocktail. If you want to do it the proper way, here’s how:

Congratulations. You now have the coolest drink in the room.

In case you feel the need to stir things up a bit, here are some ideas for variations. After all, tradition is great but change is inevitable. Here are a couple of martini ideas to bring out your inner James Bond and buck tradition. And they just happen to be perfect for summer!

Hendrick’s Cucumber Martini
Hendrick’s Gin is infused with rose petal and cucumber so this is a natural fit.