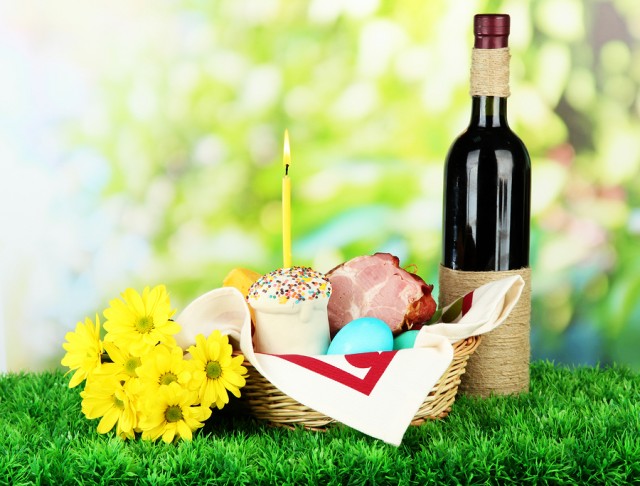 It’s been a long, challenging winter but finally, Easter is on its way. As with any religious holiday, it comes with tradition. Some traditions don’t seem to make any sense. A bunny? The bunny has been hopping into Easter since the thirteenth century as a symbol of Eostra, the Teutonic  goddess of spring and fertility. Fertility. Ah, now that makes sense. No, rabbits don’t lay eggs, but the egg is a symbol of rebirth which is, after all, the religious theme of the holiday.

Easter has its culinary traditions, too. There are certain foods that you’re bound to encounter on Easter so, aside from eggs and chocolate bunnies, you are going to want to leave room for some wine in your Easter basket. Let’s take a look at some typical Easter fare and the wines that go with them.

Brunch is a popular way to observe the Easter holiday and you want something light, fresh and crisp which will cozy up to eggs, smoked salmon or whatever else is on the menu. A mimosa, right? Come on, you can get more creative with your brunch bubbly than that! Prosecco would fit the bill nicely but leave the OJ out, please. Produced in northeastern Italy (Veneto and Friuli-Venezia), these sparkling white wines get their bubbles from the Charmat method of a secondary fermentation of the base wine. Prosecco’s floral notes and fruity character fit hand-and-glove with brunch. We recommend Astoria Prosecco NV – Veneto, Italy ($12.99 at AC Bottle Shop).

As you move on to dinner, the odds are good that one of two meats will be the center piece of the meal.  Lamb, a religious symbol of sacrifice, is one.  It has a strong flavor that, like fortune, favors the bold.  Aramis Shiraz & Cabernet Sauvignon ‘2008 from McLaren Vale, AUS ($15.99 at AC Bottle Shop) has a full bodied palate with notes of pepper, blackberry and oak.  Shiraz and lamb go together like Easter and, well, bunnies.

If lamb isn’t on the menu, then ham probably is. With ham, you’ll want to go in the opposite direction. Keep it light so that it doesn’t run over the main attraction. Riesling is a good choice for ham—and New Zealand Riesling is an even better choice! Yes, New Zealand Riesling.  Giesen Riesling ’11 from Marlborough, NZ ($12.99 at AC Bottle Shop) will present lime and green apple in the nose and continue with the fruit theme through to the tart, mineral finish. Ham never had it so good!

Finally, there’s going to be chocolate. At the very least, you know you’ll be sneaking a chunk of your kid’s chocolate bunny.  Here’s a secret: pairing wine and chocolate is not easy. Some even say it’s impossible. Clearly this is no time to fool around so go straight to the port. Our choice is Rainha Santa Tawny Porto NV – Porto, Portugal ($10.99 at AC Bottle Shop). Since most of your chocolate bunnies are milk chocolate, the lighter and more graceful tawny port is a good option.  Rainha Santa Tawny Port is aged less than three years so it does bring a little more sweetness than most tawny’s, which are usually aged for five or more years, and will melt in your mouth just like that hollow milk chocolate bunny.

Now all you have to do is remember where the Easter bunny hid that last plastic pastel egg.

Or you could pour another glass of wine. It’s up to you.